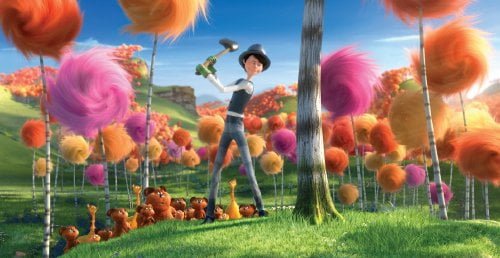 High school teen Audrey (voice of Taylor Swift) expresses a wish for a real tree and smitten twelve year-old Ted (voice of Zac Efron) ventures out of their manufactured town to find The Once-ler (voice of Ed Helms) to find out how in "Dr. Seuss' The Lorax."

Universal's "Despicable Me" was indebted to Pixar films like "Monsters, Inc." and "Up," but that film still had a charm all its own. Now along comes "Dr. Seuss' The Lorax" and it's borrowing from not only from Pixar (villain Mr. O'Hare's brilliant design is indebted to "The Incredibles'" Edna Mode and the budding Truffula is straight out of "Wall*E"), but from "Babe" (the three singing mice Greek Chorus are here as goldfish) and "Shrek" (woodland creatures and an amusing donkey). Perhaps it's the source material, one of Seuss' lesser books, but "The Lorax," for all the righteousness of its message, is too brightly colored and too noisy. Small children might enjoy it, but the crowd at a preview screening were fairly subdued. In Seussian fashion, we're introduced to Ted by being introduced to his home town of Thneedville, where everything is artificial, even its trees. Industrialization is so prevalent, the richest guy in town is Mr. O'Hare (voice of Rob Riggle, "Big Miracle"), who made his fortune selling bottled air. When Ted expresses interest in real trees, his Grammy Norma (voice of Betty White) tells him about The Once-ler who may hold the key, so Ted ventures outside of the walled town into a barren wasteland where he finds The Once-ler boarded into a two story house. Bearing the requisite 15 cents, nail and great-great-great grandfather snail that will get The Once-ler to talk, Ted discovers that it was The Once-ler himself who wiped out the trees of Truffula Valley. He did this as a young man seeking to make his fortune selling Thneeds, made from the tufts of Truffula trees, and despite the warnings of forest guarding The Lorax (voice of Danny DeVito), so upset the balance of nature that all the Swomee-Swans, Bar-ba-loots and Humming Fish left. As it turns out, though, The Once-ler has one Truffula seed left, but Ted will have to dodge O'Hare and his henchman in order to get it to live. Despite the fact that the Seuss book's illustrations depict trees topped in yellow and pink, the filmmakers seem to have almost gone out of their way to ensure that no colors found in nature be used to tell this ecological tale. The garish production design is downright ugly. Writer Ken Daurio's ("Horton Hears a Who!," "Despicable Me") adaptation does nothing to restore Seussian rhyme to the story and the multiple song and dance numbers tank because none of the original songs are engaging (guys - you had Ed Helms singing, couldn't you have gotten him to write a song or two as he did for the "Hangover" movies?). Vocal performances are OK, but DeVito's distinctive New Yawk squawk made me want to plug a cigar in the mouth of the Lorax. There are a few pleasures to be had here, beginning with those charming fish (their rendition of the "Mission Impossible" theme is a highlight). The Once-ler's donkey Mervin also sparkles with personality and the teddy bearish Bar-ba-loots have great big eyes. The animators have done a great job with costuming - O'Hare's sharp shouldered suit has amazing drape and the detail on Audrey's birthday dress is eye catching. Unfortunately neither she nor Ted are particularly interesting. "Dr. Seuss' The Lorax" isn't bad, per se, but it's not good either. It's an awkward tale told with lousy music in a synthetic Candyland.