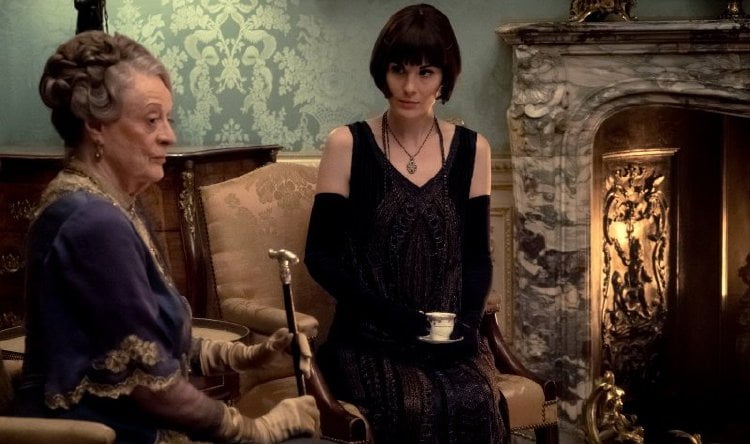 It has been a few years since the Crawley family, their servants and their humble abode were the darlings of PBS viewers across America. They make their return, this time getting big screen and big budget treatment in "Downton Abbey."

When word arrives that King George V (Simon Jones) and Queen Mary (Geraldine James) will be making an overnight stop with the Crawley family during a tour of Yorkshire, frenzied preparations begin, the downstairs staff besides themselves anticipating the honor of serving their King. But Lady Mary (Michelle Dockery) loses faith in butler Thomas Barrow (Robert James-Collier), calling back Carson (Jim Carter) from retirement and Carson finds himself unable to control a mutiny when the staff learn they are to be replaced by the King and Queen’s own at “Downton Abbey.”

If the “Downton Abbey” movie had been issued as a ‘very special episode’ of the television series, I would have been perfectly happy with it, but by ascending to the big screen, the flaws which have always marred Julian Fellowes’ period soap opera are magnified. Furthermore, there has been no effort made whatsoever to acquaint newcomers with these characters, simply throwing them in along with hard core fans to sink or swim figuring out the intricate relationships and histories of the large ensemble (something I will do here as well for expediency’s sake). Series director Michael Engler broadens his visual scope with the use of drone shots, making the exterior of Abbey stand-in Highclere Castle look even larger, but otherwise, other than its length, there is little to distinguish this from a series episode.

Upstairs the drama focuses on the Queen’s lady’s maid, Lady Bagshaw (Imelda Staunton, wife of Jim Carter), a Crawley cousin the Dowager Countess (Maggie Smith) is at odds with because of her reluctance to name the Earl of Grantham (Hugh Bonneville) her heir (for reasons that will be obvious to all but the Crawleys). Bagshaw’s own lady’s maid, Lucy (Tuppence Middleton) catches the eye of widowed Crawley son-in-law Tom Branson (Allen Leech), while he catches the eye of a mysterious stranger overly interested in his Irish Republican background (a subplot which will resolve to the surprise of no one). Lady Edith (Laura Carmichael) has a surprise of her own, one that is about to be spoiled by an honor bestowed on her husband by the King. As Lady Mary considers the advisability of keeping the Abbey running, she is burdened with another secret by her grandmother.

The goings on downstairs are, frankly, more interesting. When the supercilious royal butler (David Haig), French chef Monsieur Courbet (Philippe Spall) and po-faced royal housekeeper step in, everyone’s back is up until Anna Bates (Joanne Froggat) proposes a plan to sideline them. The film’s best scene arrives when the King notes the change in menu, complimenting it. To everyone’s horror, Mr. Mosesley (Kevin Doyle) speaks up, informing the King that his dinner was cooked by Mrs. Patmore (Lesley Nicol), not Courbet, and that they have been served entirely by Downton staff. The Queen graciously smoothes the matter over, assuring Lady Grantham (Elizabeth McGovern) that people tend to act oddly in their presence. Meanwhile Barrow enjoys a romantic interlude that turns both potentially scandalous and touching.

There’s plenty more going on, not all of it convincing (like Daisy’s (Sophie McShera) sudden anti-royal stance) or all that interesting (Lady Edith’s predicament). The Dowager continues to spar with Isobel (Penelope Wilton) but one wishes their barbs were sharper. Tom’s character benefits the most with several subplots while the most neglected series regular is Mr. Bates, relegated to a few lines in the background.

“Downton Abbey” is an enjoyable reunion with a beloved television series for those who followed it faithfully, but it fails to convince a big screen upgrade was necessary.

I, like many, watched the imported British series, much like "Upstairs Downstairs," with a fascination of the English aristocracy. But, like some, the series ran its course and I was done with the Crawley family, their servants and their humble abode. But, not so fast....

It is 1927 and, through an extended montage of a letter being written, sealed and carried across the land to doors of the abbey, where it is duly delivered to the hands of the lord of the estate (Hugh Bonneville). It is the formal notification that the King and Queen of the realm will be dropping by for a night. All of the inhabitants of Downton Abbey are either thrilled or worried, or both, about the royal visit.

So, the King and Queen are coming, but other aspects of life must go on and scripter Jullian Fellowes takes the visit and dovetails it to other subplots that make up the film. It is like watching the series but, where there were once one or two subplots per episode, the feature version contains many threads to this tapestry.

Around the story of the royal couple's forthcoming arrival spin the abovementioned subplots: The queens close confidant, Lady Bagshaw (Imelda Staunton), is conflicted over the visit since she is Lady Violet's (Maggie Smith) cousin and holds the key to the abbey's future. Son-in-law Tom Branson (Allen Leech), is approached by a mysterious stranger – is he a spy, a reporter, a government agent or an anarchist? And, there is more.

Knickknacks and small keepsakes start to go missing, coincident with the pending visit. The King's "Page of the Backstairs" (AKA head butler) arrives with his entourage and immediately takes over the running of the abbey – kitchen included. From the very start, you know that this particular conflict, and the rebellion, will be the number one subplot. There are other threads too and as I jotted them down, I set myself the task, now, to see if they are all tied up. As far as I can tell, they are, which shows careful attention to story details by Fellowes.

My take on the reason for this big budget, big scale revisit to the now-famous abbey and its denizens is two fold - to give the fans a grand closing to the Crawley family story and to make money, which it very likely will. Also, I do not think this is the end of their story.