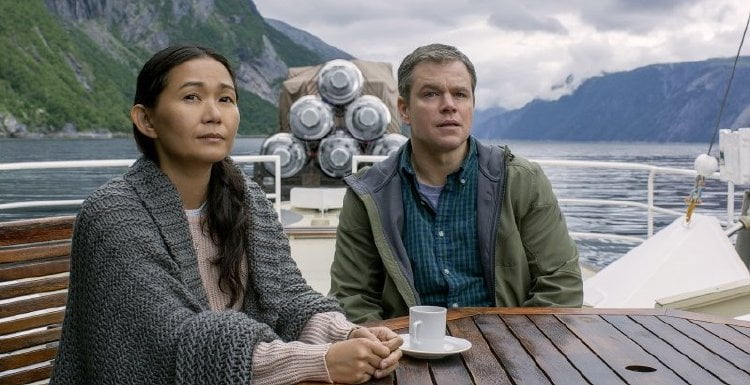 Mankind is on the brink of destroying the world and itself. But, scientists in Norway have discovered a way to safely shrink the human body to a fraction of its normal size and reap the benefits of that cellular reduction, otherwise known as “Downsizing.”

As Paul Safranek (Matt Damon) cares for his ailing mother (Jayne Houdyshell, "Garden State") in their modest Omaha home, Dr. Jorgen Asbjørnsen (Rolf Lassgård, "A Man Called Ove") makes an incredible discovery at Norway's Evansen Institute. Five years later, Paul and his wife Audrey (Kristen Wiig) witness the results at a high school reunion when classmate Dave Johnson (Jason Sudeikis) shows up. He and his wife have bought in to the Norwegian way of saving the planet by going through the process that renders them 5" tall and Audrey's particularly drawn to the additional benefit that multiplies financial assets by a factor of 125 living the small life known as "Downsizing." Cowriter (with "Sideway's" Jim Taylor)/director Alexander Payne disappoints for the first time in his career by taking a deliciously provocative and fantastical concept outside his usual scope, then narrowing focus to a relationship drama. While the latter does tie in to his satirical societal theme, too many intriguing possibilities have been left by the wayside. The film is unbalanced, delighting in conceptual details in its first half before entirely abandoning them in its second. The film does shine a spotlight on Hong Chau ("Inherent Vice"), whose performance as Vietnamese dissident Ngoc Lan Tran is its best asset. Paul is an ordinary schlub with a caring streak, frustrated that he still lives in the house he grew up in, so his and Audrey's exploratory visit to Leisureland is akin to kids at Santa's Village. Herded into an amphitheater, they watch tiny pitchman Jeff Lonowski (Neil Patrick Harris) show off an estate fit for Hollywood royalty, his wife Laura (Laura Dern) bathing while bragging about the matched set of platinum and diamond jewelry she's just bought. Jeff demands to know what she spent - $83. The Safraneks prove an easy mark even as their salesperson (Niecy Nash) lays out a process which includes removal of dental appliances and the tiny possibility of death. After their friends and family throw a farewell party, we follow Paul through a full body shave, internal 'irrigation,' and dental filling removal. One year later, Paul's divorced, his vast Leisureland manse replaced with an apartment beneath Serbian party animal and black marketeer Dusan Mirkovic (Christoph Waltz). When his date goes south despite his home cooked meal (substituting dill for chervil, the latter a herb not yet available in Leisureland, along with such things as birds and insects), Paul's convinced to join Dusan's hedonism along with the likes of Little Ronni (Cameron Geddes), the first downsized baby now trading his celebrity for sex. Awaking the next morning face down on Dusan's carpet, he first meets Ngoc Lan, the famous dissident forced to downsize and lose a leg for freedom as a house cleaner. It is she who leads Paul through a hole in a fence to the ramshackle tenements which house the world's unwanted, people Ngoc Lan is determined to help. When Dusan and his business partner Konrad (Udo Kier) insist Paul accompany them on 'a mission' to Norway's original downsized community, Ngoc Lan insists on joining them. Once there, what Dr. Asbjørnsen tells them leaves Paul with a momentous decision. There's a lot of fun to be had with Leisureland and its relationship to the regular sized world. Transportation to and from the community is divided between regular sized people and banks upon banks of pods for their tiny counterparts. A real rose becomes an object of envy in Leisureland. We hear of an immigrant widowed when unscrupulous downsizers neglected to remove her husband's gold tooth, causing his head to explode. But the real societal impact of downsizing, such as power and class between big and small, is only hinted at around the edges of Taylor and Payne's screenplay. Once Ngoc Lan appears, the caring Paul, taken advantage of by others all his life, finds love while being taken advantage of, the film's most decent character finding redemption. It's all a little odd, not unlike John Patrick Shanley's 1990 Tom Hanks starrer "Joe Versus the Volcano." Damon may be the film's star, but it's not really his film. He's the Everyman everything's happening to, the straight man as it were. Waltz is quite fun as the affably amoral Serbian, Kier his trophy sidekick, Lassgård his earnest opposite. Recognizable stars abound in small roles, Nash sharp in her one scene (watch out for James Van der Beek and Margo Martinsdale too). Hong Chau is the film's lifeblood, her bossy, unfiltered, one-legged cleaning woman both exasperating and endearing. The film's last shot, as seen through Paul's eyes, wouldn't look the same if not seen through hers first. Grade:

I have always anticipated, with pleasure, the films of Alexander Payne, the auteur who brought us “Election (1999), “Sideways (2004)” and “Nebraska (2013).” Those are personal, character driven stories that bring us into the lives of the players. Payne departs from this and enters the realm of science fiction for the new millennium. “Downsizing” is a modern fantasy fable about the chance to save yourself from a world of big people who are bent on destroying it. Norwegian researcher, Dr. Jorgen Asbjornsen (Rolf Lassgard) and his team of scientists have developed the ground-breaking technique that will reduce a six foot person to a mere six inches – with no adverse effect! Think about it! The fantasy tale follows Paul Safranek, an occupation physical therapist for the Omaha Steak Company, and his wife, Audrey (Kristen Wiig), who are struggling financially in this tough economy. There is a glimmer of hope, though, for the couple when they learn that shrinking your size will exponentially increase the worth of your assets. Screenwriter Payne explores the possibilities of this brave new world of small people. “Downsizing” plays with its satire on the follies of man in his pursuit to have it all, damn the consequences. But, Payne does not explore the many possibilities, except in passing, like the big versus small conflict that would result as the little people become the nouveau riche of the world. The story does not sustain the satire (at 135 minutes, it is too long), but it does introduce relatively unknown (her credits include a role in “Inherent Vice (2014)) Hong Chau as Vietnamese dissident Ngoc Lan Tran. A fierce proponent of human rights, she was shrunk as punishment for her radical ways and represents the oppressed working class – yes, they exist even in a small world. The actress owns that second half of “Downsizing” with a stellar, scene stealing performance. The other, better know actors that populate the large cast include Christoph Waltz, Kristen Wiig, the iconic Udo Kier, Jason Sudeikis, Neil Patrick Harris, Laura Dern, Margot Martindale, Mary Kay Place and many more. All have a good time in their mostly cameo roles. Matt Damon is the film’s “everyman” and, as usual, does a yeoman’s job in the role of nice guy Paul. The production does a decent job in creating the small people’s world and the special effects are good, though not as remarkable as in the 1957 little person classic, “The Incredible Shrinking Man.”