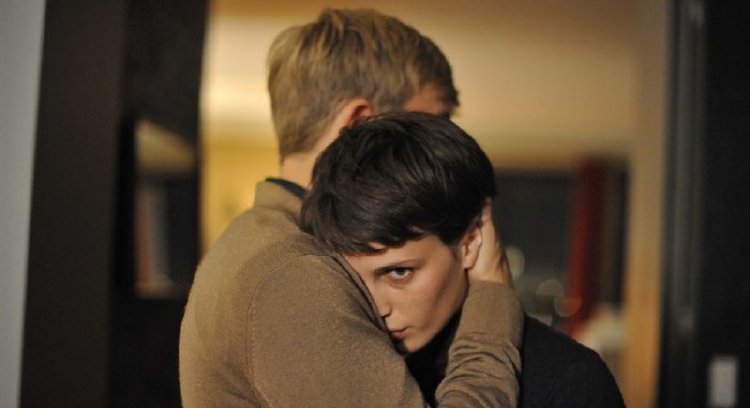 Suffering from abdominal pain, Chloé Fortin (Marine Vacth, "Young & Beautiful") visits her gynecologist who gives her a clean bill of health but suggests she see a psychiatrist. There is an immediate attraction with Paul Meyer (Jérémie Renier, "L'Enfant," "Saint Laurent"), who eventually ends her treatment and moves in. But when Chloé sees him on the street with another woman - something he vehemently denies - she goes back and finds the office of Louis Delord (Renier), not only a psychiatrist, but Paul's twin, and just like that, Chloé has a "Double Lover."

Writer/director François Ozon ("In the House") has liberally adapted Joyce Carol Oates' 'Lives of the Twins' into a kinky psychological thriller with the spirit of De Palma, the body horror of Cronenberg and the stylish paranoia of 'Rosemary's Baby,' all with his tongue firmly planted in cheek. "Double Lover" begins to run out of gas as it reveals its central mystery, but it's a hell of a ride getting to the answer. While Paul enables Chloé's confidence, the cooly cruel Louis gets to the heart of the matter, explaining to Chloé's 'Eve Martin' the concept of cannibal twins, his rare male tortoiseshell Danton an example of one fetus absorbing another in the womb. Louis claims dominance over Paul while Paul rejects his existence. Then Louis drops a name, Sandra Schenker (Fanny Sage), Paul's high school sweetheart who will lead Chloé to the truth about herself. This is a film full of mirrored imagery, split screens, body orifices and cats! Cinematographer Manuel Dacosse ("Evolution") has his work cut out for him, six reflections of Vacth merging into one in Delord's lobby. Ozon switches up the therapy session using soft split screens, giving us slightly different angled views of his actress, collapsing the space between patient and psychiatrist. A dissolve takes us from a vaginal exam to an eye. Chloé's mucus, vomit and menstrual blood presage a more ghastly reality in her own fantasies. Twinning is everywhere, Chloé's cat Milo temporarily banished to nosy neighbor Rose (Myriam Boyer, "Mesrine" Parts 1 and 2) whose mentally unstable daughter's cat Luigi sits stuffed in her abandoned bedroom (Rose will also answer the door in curlers and a hair net, shades of Ruth Gordon's Minnie Castavet). Chloé's sexual fantasies include Paul inviting his twin into their bedroom, she splitting into two to accommodate their lovemaking. The production is elegant, Paul's warm neutrals contrasted with Louis's cool ones. Visual effects are subtle, Philippe Rombi's ("Moonrise Kingdom," "Frantz") score foreboding and mysterious. Renier has a lot of fun with his dual role, never pushing its extremes into camp, Paul shaggy and supportive, Louis slick and sexually aggressive. Jacqueline Bisset makes a surprise third act appearance as Sandra's mother. Ozon takes "Double Lover" to extremes in service of art house kink ensuring his audience some seriously trashy fun. Grade: