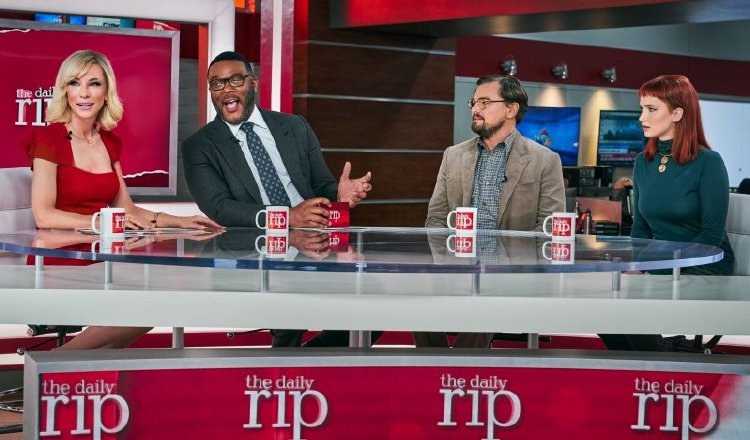 Alone in a Michigan State lab, PhD candidate Kate Dibiasky (Jennifer Lawrence) is thunderstruck when she identifies a previously unknown comet.  Her advisor, astronomy expert Dr. Randall Mindy (Leonardo DiCaprio), is also beside himself with joy.  Then he begins calculating its orbit and their elation turns to horror when they realize the Dibiasky Comet will strike Earth in just over six months.  That horror is amplified by magnitudes when President Janie Orlean (Meryl Streep) only considers the information through the lens of midterm impact, and a right wing misinformation campaign advises “Don’t Look Up.”

It’s quite easy to recognize the targets writer/director Adam McKay ("The Big Short," "Vice") is satirizing here, from the Trump administration to right wing anti-vaxers and climate deniers to a ratings and entertainment focused media, but when satirical material is quite literally true it fails to be as funny as it should be.  That’s not to say “Don’t Look Up” isn’t entertaining, albeit in a hopeless kind of way.  Its star-studded cast all work their various angles, from Lawrence’s unfiltered disbelief at blasé reactions to an extinction event, to Streep’s preening egotism to Timothy Chalamet’s skateboarder puppy love.  There’s also Ariana Grande and Kid Cudi’s original song, which sounds like a typical movie ballad unless you pay attention to the lyrics.  And if the film ends on a pitch black note, wait for a mid-credits stinger that pays off on a gag set up far earlier.

As soon as Mindy shares his dire analysis with NASA’s Dr. Clayton 'Teddy' Oglethorpe (Rob Morgan), he and Kate find themselves being immediately flown to D.C. on a military transport, only to sit outside the oval for seven hours before being told they need to stay overnight for an a.m. meeting.  Kate will learn that 3 star General Themes (Paul Guilfoyle) charged them all for bottled water and snacks she later discovers are free in a White House kitchen, bizarre behavior she’ll bring up throughout the rest of the film.  Then there’s the President’s Chief of Staff, her son (Jonah Hill) who thinks she’s so hot ‘if she weren’t my mother…’   When Mindy admits that his calculations are actually a few tenths of a percent off 100, they’re advised by the President that they should just call it 70%, sit tight and assess.  Who are these people?

Deciding to go to the media, Randall and Kate are booked with celebrity anchors Jack Bremmer (Tyler Perry) and Brie Evantee (Cate Blanchett).  They follow pop star Riley Bina (Ariana Grande), whose admission that she still loves her ex, DJ Chello (Kid Cudi), leads to an on-air marriage proposal.  Giddy from that ‘breaking news exclusive,’ Jack only wants to ask them about aliens and while Randall, who’s constantly told he needs ‘media training,’ tries to cooperate, Kate is having none of it.  Her outburst results in viral memes labeling her a shrew and her boyfriend (Himesh Patel) excoriates her publically.  Meanwhile Brie decides that Randall is the ‘hot astronomer,’ and so he, too, is branded (and also bedded, to the great heartbreak of his loyal wife June (Melanie Lynskey)).

Needing some PR, the White House finally decides to take action, launching Colonel Ben Drask (Ron Perlman) into space along with a bunch of missiles headed for the rocket.  He’s merely window dressing and takes the opportunity to make racist remarks throughout the experience.  But the scientists, who’ve joined the President in the situation room, are aghast when she’s called out by Big Tech billionaire Peter Isherwell (Mark Rylance, best in show), then returns to watch everyone turn to earth.  Isherwell wants to mine the comet for mineral resources used to build his phones.  Who are these people?

McKay’s film begins to meander, Mindy corrupted by Brie Evantee, Kate hooking up with a bunch of teenaged, pot smoking skateboarders who claim her as their guru.  U.S. citizens embrace the ‘Don’t Look Up’ concept whole hog, until the comet becomes visible to the naked eye.  The filmmaker gathers his initial band of thinkers and their more reasonable tag-a-longs for a homey gathering, but seems to have nowhere to go.  When we are witness to an entire country brainwashed by the self-serving idiocy of an undeserving few, it’s really hard to make merry.