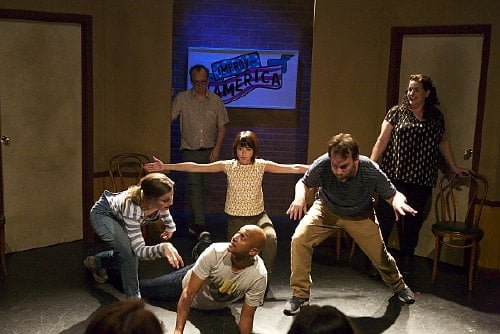 The members of the popular New York improve group, The Commune, are facing the facts of life. The theater where they perform is closing in just weeks and their future is uncertain. They press on, regardless, even when one of their numbers gets a big break on the popular TV show, Weekend Live. The rest of the troupe realizes that their chances for similar success are not that great and not likely to get better in “Don’t Think Twice.”

Eleven years after founding the improv group The Commune, Miles (Mike Birbiglia) and his troupe, all best friends, learn that Donald Trump has bought the building. Still searching for new space, the group of six is further shattered when one of their own grabs the brass ring, cast in the SNL-like 'Weekend Live.' As the friends struggle to find footing, they must eschew one of the rules of their training, "Don't Think Twice." Writer/director Mike Birbiglia explored his own world of stand up in his feature debut, "Sleepwalk With Me." Now, reaching farther back to his time with Upright Citizens Brigade Theater, Birbiglia's filmmaking has become stronger, the six main characters of his ensemble giving him opportunity to venture outside his own experience. The truths of human nature in the face of success vs. failure, ambition vs. comfort and spotlight vs. support may apply outside the world of comedy, but they're a little funnier in it. Five of the six - Miles, Jack (Keegan-Michael Key, "Keanu") and his girlfriend Samantha (Gillian Jacobs, TV's 'Community'), Bill (Chris Gethard, TV's 'Broad City') and Allison (Kate Micucci, TV's 'Raising Hope') all live together in a cramped apartment that's more like a college dorm. They work various jobs, like giving out grocery samples or bicycle messengering, to eke out a living (Mike teaches improv and, like the arrested development of his living situation, sleeps with his younger students). The sixth, Lindsay (Tami Sagher, TV's 'Inside Amy Schumer'), comes from wealth but spends most of her time there. Lindsay is quietly viewed as having an unfair advantage. With one of their own on the inside, competition begins to win a coveted writing slot or two. But the 'in' they're counting on is defensive, warned to not overburden the producer. An attempt at taking The Commune upscale, its $5 audience asked to shell out $45, fails miserably. A romance blooms while another fades, an aging parent brings crisis. When another of their own unexpectedly gets that writing job, a shelved project gets new life in the aftermath. The cast is as well oiled as the improv group they portray, each bringing something unique to the table. Jacobs is the most affecting as the player who doesn't want change at all, happy just to have her friends around her doing what they love. Each of the others remains likable, their bonds stronger than the jealousies, delusions and petty judgements their predicament brings to the surface. Birbiglia was smart to use SNL as his movie's springboard to fame, its cutthroat, tenuous environment in sharp contrast to the supportive home of The Commune's bare bones theater. (It also allows for cameos from the likes of Lena Dunham and Ben Stiller, playing themselves.) "Don't Think Twice" is about friends reevaluating their lives when youthful dreams don't pan out. Miraculously, Birbiglia finds a believable path to a happy ending - it's just not the one any of his characters envisioned. Grade:

This a well-cast ensemble film about the six members of The Commune and the hopes and dreams of each to become a star. Every player in the improve group is fully fleshed out and their insecurities and fears are matched by their inflated egos. They may be a tiny band but they work together like a well-oiled machine on stage. The ostensible leader of the group is Miles (writer/director Mike Birbiglia). He has the most experience of the troupe but is worried about his future as an actor. Jack (Keegan-Michael Key) is the most ambitious of The Commune and, with girlfriend and fellow troupe member, Samantha (Gillian Jacobs), is the first to get an audition for a coveted spot on Weekend Live. Allison (Kate Micucci) is a budding cartoonist but her lack of confidence and timidity hold her back. Lindsay (Tami Sagher) is a gregarious comedy writer and possibly the most driven to succeed. Bill (Chris Gerhard) is a diminutive comic actor who is happy to just be a member of the close-knit improv players. The story, by Birbiglia, spans about four weeks, from the day they learn that their beloved theater is to be gentrified to the final performance of The Commune. What happens during these 28 days shows all the elements of the daily life of the improvisation players as they try to figure out what happens next. Jack, outwardly the most talented when he is signed up for WL, basks in his new found fame and wants to help his friends – though it turns out he cannot. Jack’s fame brings out even more the insecurities of the others, especially Miles, who sees this as the sign that he will never be a star. You like all the characters and their foibles and the cast bring all to life. “Don’t Think Twice” works best when the troupe performs onstage. We get full length skits and they are funny and have the real feel of improv. Mike Birbiglia shows real talent on several levels – actor, screenwriter and director. His first feature film, “Sleepwalk with Me (2012),” was an autobiographic journey of a stand up comedian as his routine evolves and changes. “Don’t Think Twice” jumps him up the filmmaking ladder and he shows the depth of his ability here, especially directing his talented cast (and himself, though he gives more attention to his co-stars and their characters). It is a nice slice of life look into these modern day vaudevillians.