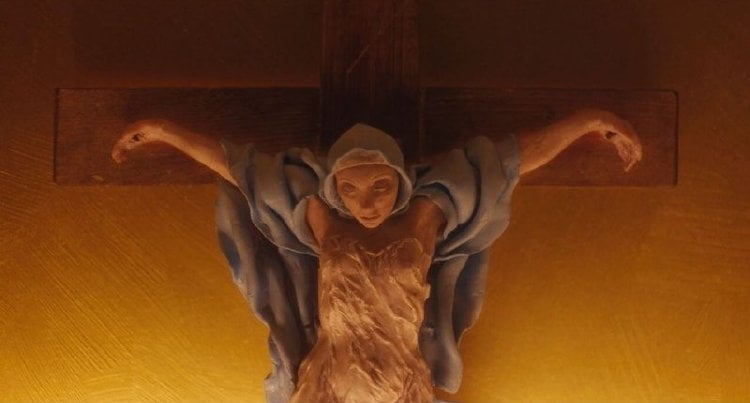 Before her latest show has even opened, Melanie Thomas (Anna Margaret Hollyman, "7 Chinese Brothers") is devastated by an early review that calls her dioramas more arts and crafts than art and accuses her of exploiting a real life tragedy in her 'Mysterious Disappearances of Ireland.' But then she gets a call from Shelly (Helena Bereen, "Hunger," insidious) saying Father Alistaire Burke (an affecting Lalor Roddy, "Hunger"), the man at the center of that mystery, wishes to not only buy her piece, but fly her to Ireland to create another to be put up for bid with wealthy collectors in "Don't Leave Home."

The more I think about this Irish horror tale from writer/director Michael Tully, the higher my opinion of it. "Don't Leave Home" would have benefited greatly from a better title, tighter control of its own mythology and a reining in of its soundtrack's evolution into airy fairy wind chimes, but Tully's creepy Catholic allegory hits high notes in its climax that recall Kubrick and Polanski. A prologue tells the tale of Siobhan Callahan (Alisha Weir), a young girl whose parents commissioned a painting of from Burke. As she knelt in prayer before a grotto housing a statue of the Virgin Mary, shafts of light illuminated her, a phenomenon Burke captured in oils. But the next morning, Siobhan's mother could not find her. Returning to her house, she looked at the painting. Siobhan had disappeared from it as well. Over the years, upwards of thirty others mysteriously vanished in the same area. After flying to Ireland (the film's title appears over the plane in the sky, as subtle as a hammer), Mel makes her way to the remote manse whose location she's been instructed to keep under wraps. Gazing upwards she is startled to see herself looking down at her. She's warmly greeted by Shelly, but Padraig (David McSavage, "Cavalry"), the butler who follows to deal with her luggage, is straight out of creepy butler casting. Over tea, Shelly once again trumpets the lucrative potential being offered Mel, then shows her about the antique filled, stained glass windowed manse on the way to her room. She's advised to ignore strange sounds and that Burke's room is at the end of the hallway and she shouldn't venture there. Shelly insists the travel weary Mel walk out to check out the grotto, which she does despite the drizzle (her peaked, hooded red rain jacket tips its hat to Roeg's "Don't Look Now"). She's offered a disturbing looking stew for dinner, which she eats alone. Our first glimpse of Burke is from outside the room in which he's closely huddled with Shelly and Padraig, a shot which recalls both the "The Shining's" party guests and the unnerving framing Polanski used in "Rosemary's Baby." Burke is clearly haunted by his 'evil miracle' and privately asks Mel to meet him early in the morning without Shelly's knowledge. One of the more frustrating aspects of "Don't Leave Home" is that we never get a sense of just what Shelly's relationship to Burke is, an unexplained power dynamic. But Tully reels us in to his tale's mysteries with strange sounds and unsettling sights in the night. His revelation of Shelly's ultimate plan is a real showstopper, a bit of Kubrickian weirdness and startling imagery including Sheela-na-Gigs and the highly unexpected appearance of the much touted collectors. The film is soaked in mood, its soundtrack heavy on Irish folk and classical, a key scene scored to royal court music. The spiritual conclusion, a fantastical mashup of the 1969 Night Gallery pilot episode 'The Escape Route' and New Testament allegory, is undercut by its final musical selections, but "Don't Leave Home" still achieves power. It could be read as a response to years of Catholic abuses in one of its staunchest strongholds. Grade: