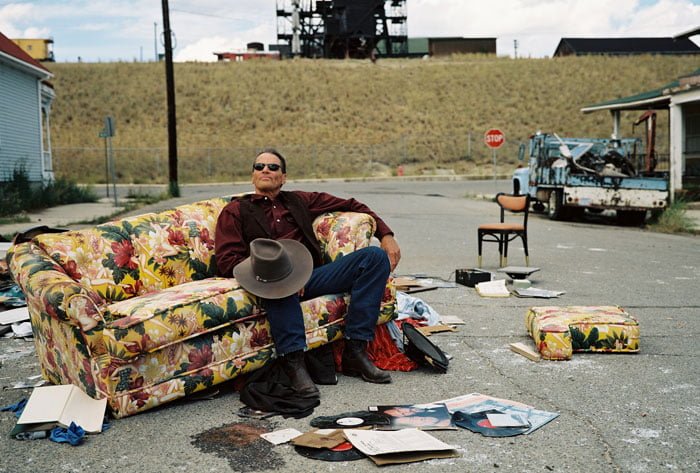 Howard Spence (Sam Shepard) was once a big time Western movie star. Over the years he has become jaded with his fame and has taken to debauchery, booze and drugs. One day he has an epiphany and sees his life for what it is – a waste. He jumps on his horse and rushes as fast as he can from his bad old ways in Don’t Come Knocking.”

When Howard abandons the set of his latest movie he sparks a flurry of activity as the producers frantically try to locate their missing star. Meanwhile, Howard gives away all of his possessions and treks off to places known only to him. He makes a phone call to his mother – whom he has seen or written to since he left home 30 some odd years ago – and asks if he can visit her. Mom (Eva Marie Saint) is thrilled to have her lost son come back and she welcomes Howard into her home. Howard doesn’t tell his mother much of what has happened in his messed up life but she has news for him. Since he never got in touch with his mother he never learned that, years before, he became a father while on a film shoot in Butte, Montana. Howard decides to face his past, bids his mother goodbye and drives off to find his son. The journey unearths long buried feelings when he meets his old flame, Doreen (Jessica Lange), in her bar. She points to the singer on stage and declares to Howard, “That’s your son.” The rest of this reflective character study deals with Howard and his son, Earl (Gabriel Mann), coping, not always so well, with their brand new relationship. Don’t Come Knocking” recalls Wim Wenders 1984 film, Paris, Texas,” with their parallel themes of a lost man finding himself. Both that film and “Don’t Come Knocking” were penned by Sam Shepard who plays Howard as a man searching for a reason in his troubled life. His and Earl’s story is augmented by a couple of other plot lines. One has Sky (Sarah Polley) also heading for Butte but it is with the ashes of her recently deceased mother. Sky believes that Howard is her father, too. She doesn’t lay any claim to the man and becomes his muse regarding Earl. The other has Sutter (Tim Roth) hunting Howard down to bring him back to the movie set to complete shooting the film. This last part has a tacked on feel that differs from the rest of the film. The acting never finds its true level with Shepard playing the taciturn movie star cowboy without a great deal of emotion. Jessica Lange, on the other hand, shines out as the wise woman who knows what she wants – and it isn’t Howard. Gabriel Mann plays Earl as too angry, making his character a hard one to like. Sarah Polley is likable and enigmatic as Sky. Fairuza Balk (where the heck has she been?) has some good fun as Earl’s smart-ass girlfriend, Amber. Don’t Come Knocking” marches to Wim Wender and Sam Shepard’s own drumbeat and may not appeal to other than the art house crowd. It’s a nice looking film but, alas, not one that I could get my head around.