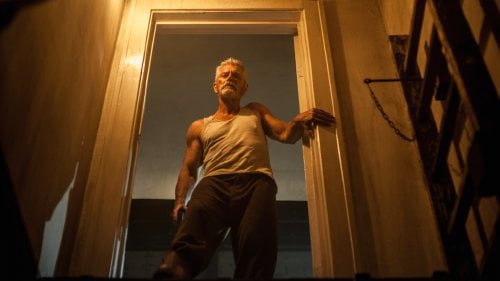 Rocky (Jane Levy, 2013's "Evil Dead") is ready to do whatever it takes to get away from her Detroit home, so when her petty thieving boyfriend Money (Daniel Zovatto, "It Follows") learns that a blind man (Stephen Lang, "Avatar") has $300K in cash stashed in his home, they think they've found an easy score. But the man is no sitting target and his home stores more than money as the terrified teens learn too late in "Don't Breathe."

Detroit's sure become a favored horror setting of late. Beginning with an overhead shot of a woman being dragged down a street that recalls "It Follows'" opener, we are plunged into a neighborhood that borders that film's and Ryan Gosling's "Lost River." But writer/director Fede Alvarez (2013's "Evil Dead") has more horror references stashed away in his locked house horror, his premise not too far afield from this year's earlier "Green Room." There is another friend in the mix. Alex (Dylan Minnette, "Goosebumps"), who clearly carries a torch for Rocky, is their inside man, his dad's job at a security firm allowing them to pinpoint properties worth robbing while working around burglary systems. But Alex is staunchly against Money's latest proposition. Up until now, they've steered clear of cash as thefts of more than $10K are deemed a major crime with stiff jail penalties. It's Rocky's desperation, wishing to remove her little sister from their abusive mom and her string of shady men, that ultimately convinces him to move forward. At first, everything goes swimmingly. Money's thought ahead, tranquilizing the blind man's Rottweiler and unleashing a gas in the sleeping man's bedroom. But when he uses a firearm to access the bolt-locked basement, the man appears and the former army veteran is more capable than they've expected. Much as in "Lights Out," we have three people who need to use their wits to battle an unlikely monster, especially difficult when he plunges them into darkness. His senses of hearing and smell are more astute than theirs, hence the film's title. As in "Green Room," the three are locked in, turning the blind man's house into a puzzle box of possibility. Alvarez knows how to build tension, but unfortunately he leans on narrative laziness to accomplish it, threats appearing with no explanation of how they've worked themselves out of their last predicament. His big reveal about just what the blind man is hiding is sleazy exploitation with dubious psychological logic to back it up. It's more fun watching him pay homage to "Alien" and "Cujo" than going down this sick and twisted path. Earlier this year, there was a VOD release with much the same premise. If you like "Don't Breathe," catch "Crush the Skull." It has comedic elements this one does not but it's a more satisfying experience overall. Alvarez's thriller is good, but could have been so much better. Grade: