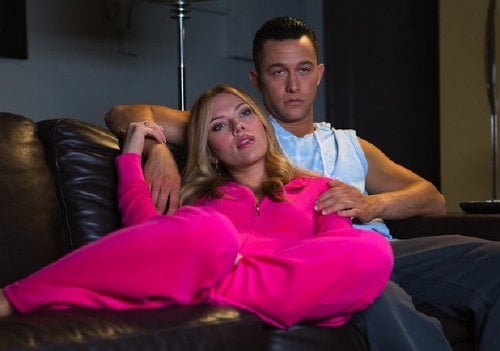 Actor Joseph Gordon-Levitt does double duty, making his feature writing/directing debut with this terrific and unusual comedy that taps into this year's cinematic focus on porn while following the basic groove of "Saturday Night Fever." Bulked up and sporting a gelled mini mohawk for his job in front of his camera, Gordon-Levitt is almost as unrecognizable as he was in last year's "Looper," but his filmmaking talent is easily discernable from his great casting choices to his ear for dialogue and timing for motifs. Gordon-Levitt grabs us with his thematic opening credit montage featuring the objectification of women with such images as a cartoon fox, "Fast Times at Ridgemont High's" Phoebe Cates emerging from pool and an overexposed Telenova weather girl. This will be the first of numerous, quickly cut montages which propel "Don Jon," such as his early soliloquy on how 'real pussy can kill you.' Like Tony Manero, Don's a legend with his friends Danny (Jeremy Luc, "Detention") and Bobby (Rob Brown, "Finding Forrester," HBO's 'Treme') for scoring the most and hottest babes at a local club. Also like Tony, Don pays finicky attention to his hair, forges a path to betterment under the tutelage of a more sophisticated, older woman.and has an Italian family that screams together when they're not attending Catholic Church. Once he's decided to play 'the long game' for Barbara Sugarman, Don must go against his natural grain. It's 'A Special Someone' at the movies (amusing cameos from Ann Hathaway and Channing Tatum) instead of 'So Hard, So Fast 3D,' with only a goodnight kiss to show for it. But he's got a trophy and he (and she) knows it - dad's (Tony Danza, TV's 'Taxi,' 'Who's the Boss?') tongue practically unrolls to the floor when she comes for the requisite meet-the-family-dinner. He's even enrolled in accountant classes at night school, where older odd classmate Esther (Julianne Moore, "What Maisie Knew") calls him out for watching porn during class on his cell phone. And that's the one thing Barbara can't seem to remold - even after the long awaited coitus is finally granted, Don finds he still needs porn for fulfillment and when Barbara finds out and flips out, he just goes underground. Meanwhile Esther keeps on his case, gifting him with a Danish erotic art film and gradually getting under his skin. As a screenwriter and a visualist, Gordon-Levitt artfully uses repetition (his berating of his dad's inability to conceive of using Tivo instead of waiting for a game replay is reconceived to bite Don in conversation with Esther; the evolution of his raging drives to Church followed by his bounding up its steps; a time-lapse porn marathon). He directs a running performance gag using Brie Larson's ("Short Term 12") Smartphone-glued sister Monica, whose hilarious deadpan disgust remains unvoiced until a late breaking analysis of his relationship. There's really only one flaw in "Don Jon" and that's Esther's persistence in engaging Don - it doesn't make sense, he recoiling from her surface emotions, her very otherness, even though the relationship's payoff in Don's sexual redemption works (rooted possibly in another 70's film, "Summer of '42"). Gordon-Levitt gives himself an arc that begins comically and ends with emotional revelation and he's surrounded himself with just the right actors to support it. Johansson, looking artfully cheapened, makes for an impressive manipulative cocktease. Danza is a highlight as the tree from which the apple's fallen while Glenne Headly is the fading dime wishing for the same future for her son that Barbara projects. Luc and Brown round out the pickup trio with different notes, Luc more a comedic foil, Brown the realist. Moore works through her awkward character introduction by turning inexplicable interest into very real human need. With "Don Jon," Gordon-Levitt would seem to have made the anti-"(500) Days of Summer," but by the finale, Don's redeemed, having learned to lose himself in true romance.

Jon (Joseph Gordon-Levitt) has his life priorities pretty well set: his body, home, ride, family, friends and church. But there is one priority that is greater than all the others: his online porn. But, when Barbara (Scarlett Johansson) comes into his life, his biggest priority may be the downfall for “Don Jon.” Star Gordon-Levitt dons the hats of helmer and scripter for the first time with his story of an online sex addict. Jon is a handsome young stud who roams the bars with his bros, Bobby (Rob Brown) and Danny (Jeremy Luke), looking to score babes who are no less than an 8. His nighttime trysts invariably end up in bed but, afterward, it is his laptop connection to the internet that opens him up to his more satisfying recreation: masturbating to online porn. For the ladies’ man, online sex is better than real sex. That is, until he meets Barbara. Following his usual pattern, Jon goes on the prowl with his buddies and spots a number 10: Barbara. Jon makes his usual, always successful moves on her but, to his utter disbelief, she turns him down and goes home alone. On the rebound, he scores an 8 and does not go home alone. Then, as usual, he satisfies himself again watching his beloved porn. But, he cannot get Barbara out his mind. Will this mean the end of Don Jon? Actor turned filmmaker Joseph Gordon-Levitt creates, his first time out the gate as helmer and writer, a funny, intelligent and unique story about one man’s addiction, not just to sex, but to online pornography. The filmmaker locates his story in New Jersey and he does a great job getting Jersey accents from all his players, including, to my pleasant surprise, Scarlett Johansson as sexy, seductive but chaste Barbara. The supporting cast is not just made up with talented veteran players; they are given carefully crafted characters that ring true. Hot-tempered Jon takes after his father, Jon Sr. (Tony Danza) and not his much gentler mother, Angela (Glenn Headly). In a near silent performance, Brie Larson plays Jon’s sister Monica, brilliantly shows disdain for all the family drama going on around her, never looking up from her smart phone. The character may be slight but the talented Larson breathes life into her teen sister role. The rest of the cast is rock solid, too. I have liked Joseph Gordon-Levitt as an actor ever since TV’s “3rd Rock from the Sun.” I did not expect that he would make his debut as a filmmaker with such a funny, well-crafted flick, but he did.