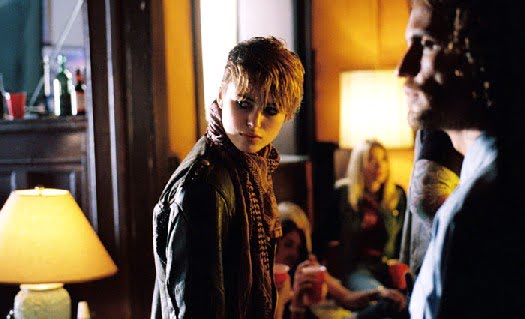 British film actor Laurence Harvey and his supermodel wife Paulene (Jacqueline Bisset, "The Sleepy Time Gal") raised a daughter of privilege who became a Ford model like her mother. But this girl was uncomfortable in her surroundings and rebelled by becoming a Los Angeles bounty hunter, dangerous work usually more associated with male criminal types than women of wealthy background. Her name was "Domino."

Working from a script by Richard Kelly ("Donnie Darko"), director Tony Scott ("True Romance," "Man on Fire") has made a film that is far from biographical, instead more like a remake of his own "True Romance" filtered through the trippy mindset of Oliver Stone's "Natural Born Killers," but without as much coherence. This big mess of a movie barely sticks to its titular subject, instead veering off into stories about bail bondsmen and their mistresses working scams at the DMV, immigrants from Venezuela and Afghanistan, casino owners who launder money for the mob, reality television and the continuing allure of former stars of "Beverly Hills, 90210." It's hard to believe this was written by the young guy who dreamed up "Donnie Darko." His idea of imparting Domino's background is to feature Harvey in "The Manchurian Candidate" on TV during a shootout, with Domino's boss asking if that's her dad (as if he wouldn't have known). Some of his themes, the 'all-controlling' aspect of the DMV, Domino's goldfish connection to her dead father, are of interest, but they're overwhelmed amidst all the noise. Too many of his other ideas, from a third act group mescaline trip, complete with a wandering psychic preacher (Tom Waits) and a violent climax where all the groups gather to fire upon one another, simply seem lifted from aforementioned films. Little recurrent catchphrases, 'the 90210 life,' or the 'who didn't?' rejoinder to anyone mentioning having known Frank Sinatra, add flavor but the stew has already been overcooked. The cast is immense. Keira Knightley ("Pirates of the Caribbean," "The Jacket"), who is excellent in the upcoming "Pride & Prejudice," here gets by with lots of yelling, attitude and her grunge butch look. But this film could be said to actually revolve around the character of Lateesha (Mo'Nique Imes-Jackson, "Soul Plane"), the DMV worker whose sick grandchild is the impetus for much of the convoluted plot, and Mo'Nique is sympathetic, recognizable and hilarious, especially during an appearance on 'The Jerry Springer Show' as a twenty-eight year-old grandmother who is promoting new ethnic categories like Blactino and Chinegro. Her posse includes twin cousins Lashandra (singer Macy Gray) and Lashindra (Shondrella Avery) and fellow DMV clerk Raul Chavez (Joseph Nuñez, "The 40 Year-Old Virgin"). While they're atmospheric, Domino's crew gets more of a chance to establish character and Mickey Rourke's ("Sin City") Ed is much what you'd expect of Rourke's take on a legendary hunter. Venezuelan television star Edgar Ramirez is a real find as Choco, undone by his feelings for Domino he tries to court cute by speaking Spanish, which she does not understand. The guy's got charisma. Christopher Walken ("True Romance") supplies one of his patented weirdo's as an enthusiastic reality TV producer and Mena Suvari ("Spun") is effective in a small role as his assistant. Many big names don't do much to distinguish themselves, however, including Delroy Lindo ("Sahara") as the bail bond boss, Lucy Liu ("Kill Bill, Vol. 1") as an FBI agent, Dabney Coleman ("Moonlight Mile") as the casino owner and Jacqueline Bisset as Domino's mom. '90210's' Ian Ziering and particularly Brian Austin Green prove very good sports as themselves. Dale Dickey ("The Pledge") makes her mark as Edna. Cinematographer Daniel Mindel uses all forms of visual trickery, all in a palette the colors of pus. The images have been edited to within an inch of their lives, sometimes including multiple superimpositions, giving the effect of an epileptic seizure. Tony Scott's penchant for quick cutting has been building over the years, but this time, he's leapt over the edge. "Domino" certainly does have its moments but it makes its audience work too hard to find them. Do not mistake this movie for a biopic. It is a violent, often funny cartoon, but Domino's story still has not been told (the real Domino Harvey died this past June of an overdose).

She was the daughter of actor Laurence Harvey, a successful Ford model and lived a privileged life. But, this easy, pampered world was not for her and, when she attends a how-to-be-a-bounty-hunter seminar, the feisty young woman knows she has found her calling in “Domino.” When Domino (Keira Knightley) figures out that the recruitment seminar is a scam, she confronts its leader, ex-con Ed Moseby (Mickey Rourke), and lobbies for a job. Impressed by the slight woman’s passion and ability, he invites her to join his small yet formidable team – Ed, Choco (Edgar Ramirez) and explosives-obsessed Afghani ex-pat, Alf (Rizwan Abbasi). The quartet forms a smooth running machine that allows them to build up an astonishing record in catching felonious bail jumpers. The notoriety of this band of bounty hunters attracts the attention of television producer, Mark Heiss (Christopher Walken), who hires the skip tracers to appear in their own reality-based TV show, “Bounty Squad.” The show is a hit, mainly due to the presence of diminutive, beautiful and deadly Domino. Fame and success are assured until the hunters’ boss, Claremont Williams III (Delroy Lindo), pulls them into a scam that involves the mob, some confused teens and the FBI. The “Squad’s” world is turned upside down when Claremont’s scheme goes very bad and the four must escape the clutches of the Feds, led by criminal shrink, Taryn Miles (Lucy Liu). Director Tony Scott, working with a screenplay by Richard Kelly, has created a kitchen sink film that is a cross between the helmer’s own (and far better) True Romance” and Oliver Stone’s “Natural Born Killers.” Scott’s latest work is so derivative of the latter film it could have been called “Natural Born Bounty Hunters.” There is a lot going on in “Domino.” Too much, perhaps, as Scott and company combine nitty-gritty bounty hunter work, ripping off the mob, family angst and crisis, loads of shoot ‘em up action and an editing style that gave me a headache. MTV, decades ago, had set the standard for rapid fire editing technique where all but a few shots last for more than a second or two. This may work well in the short attention span world of music video but in a feature length film, even one that wears its hipness on its sleeve, it is a difficult thing to pull off. Tony Scott, et al, do not pull it off. Knightley’s performance is hip and tough enough for the role of nun-chuck swinging Domino, but the actress never evolves above the two-dimensionality that she is saddled with in this confused, overly long story. She is equal to the physicality the role demands and is pretty eye candy but is left dangling by the script. Of the other principle cast, Mickey Rourke and Edgar Ramirez have the best likeability quotient with Ed as the tough yet almost compassionate bounty hunter boss. Ramirez, with his smoldering good looks and dark humor, is a good choice for Choco. The rest of the cast is pretty much wasted. Even Christopher Walken and Delroy Lindo can do little to give body to their characters. Others, like Dabney Coleman and Lucy Liu, vanish into he background. Production is slick, along the lines of a good music video, but this is not what I look for in a good movie. “Domino” suffers from its slickness and never goes beneath the surface. I don’t feel that I even got a vague examination into the life of Domino Harvey and never believed that Knightley was the real woman.