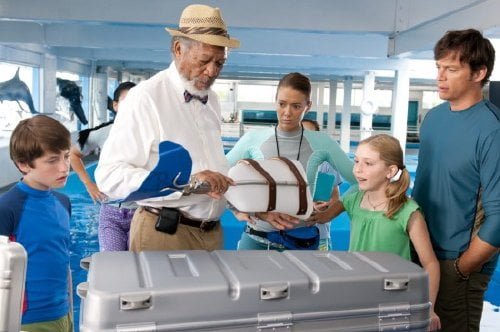 Sawyer Nelson (Nathan Gamble, "The Dark Knight") has kept much to himself since he and his mom (Ashley Judd) were abandoned by his dad five years earlier. When his cousin Kyle Connellan (Austin Stowell, TV's 'The Secret Life of the American Teenager') leaves to serve in the military, Sawyer crawls even further into his shell. Then one morning on his way to summer school, Sawyer is involved in the rescue of a dolphin ensnared in a crab trap. She's named Winter and when her injuries demand amputation, Sawyer, connecting the dots with what he's seen at the V.A. hospital Kyle returned to, is determined that she receive a new tail in "Dolphin Tale."

How can one not appreciate such an inspiring true life story? It's hard not to like "Dolphin Tale," especially as a family film. If only writers Karen Janszen ("A Walk to Remember," "Duma") and Noam Dromi had resisted the urge to create so many obvious parallels to present it with, it might have been better. Still director Charles Martin Smith, whom I always associate with his acting work in the 1983 nature film "Never Cry Wolf," doesn't wallow (too much) in the sentimental and primarily keeps his focus on Winter (the real dolphin plays herself) and the kid. As marine biologist Dr. Clay Haskett, Harry Connick Jr. also brings a common sense level-headedness that helps keeps the film grounded. The film opens with a reverie on the joyful life of a dolphin as a pod plays beneath the waves (one even swims through rings it creates with its blow hole!), the future foreshadowed as one stops to observe the actions of fishermen from below. Sawyer's then established as a loner of a kid who views his older, athletic cousin as a father figure. Kyle gifts him with an elaborate Swiss Army knife before he leaves, all the better to associate his character with the dolphin who will give Sawyer's life meaning (it's used to cut the ropes binding Winter). The team who show up from the Clearwater Marine Rescue Hospital includes precocious twelve year-old Hazel Haskett (stage actress Cozi Zuehlsdorff, in her feature film debut), who takes note of Sawyer's efforts on the dolphin's behalf. After school, Sawyer bikes to the hospital and, finding it closed to the public, sneaks in an unlocked employee entrance only to be confronted with Rufus, the facility's confrontational pelican. Hazel finds him and sneaks him up to the off limits area where Winter is pooled. When the dolphin calls out to him ('Tweety bird!' Hazel calls this special noise), her dad, Dr. Clay, relents and allows the boy access. In the coming week he becomes part of the team working to rehabilitate the injured mammal. Mom then finds out he's been skipping summer school, but she's convinced to allow the boy to follow his passion. More disasters strike in the forms of Kyle's battlefield injuries and a hurricane which proves the final straw for the committee who've been keeping the debt-laden facility afloat, but as we know Winter is still alive and thriving, it's just a matter of some twelve year-old initiative and a miracle or two to set things right. It is kind of intriguing how the screenwriters set some things up then failed to deliver the punchline. Sawyer's established as a mechanically inclined kid, tinkering in dad's old workshop, building a remote-controlled helicopter, yet he never gets directly involved in Dr. McCarthy's (Morgan Freeman) prosthetic development. Similarly, a whole scene is given over to Sawyer and Hazel discovering they are each missing a parent but the heralded hookup between Lorraine and Clay never happens. Seeing as how the film runs a wee bit long as it stands, it's possible certain developments were left out in the editing room. For a child actor, Gamble's got quite a filmography built up and he plays his role quietly while still getting across his love of Winter. In her first time out, you can still see remnants of 'Lil Orphan Annie in Cozi Zuehlsdorff, a live wire who can't quite tone her performance down enough yet remains quite likable. Connick Jr. helps settle the story down into reality while Kris Kristofferson adds squinty-eyed 'crust' as his seafaring dad. Freeman does his usual impish grandfather routine (and how the actor retains this persona despite the sordid details of his private life is beyond me). The film's sets are admirably dinged up, befitting a sewage treatment plant turned marine facility and a believably lived in ranch home for Sawyer. To 3D or not 3D is entirely up to how enamored one is of the format - it adds little except in a few scenes utilizing overlaid graphics and some shots of Winter jumping up toward the camera.