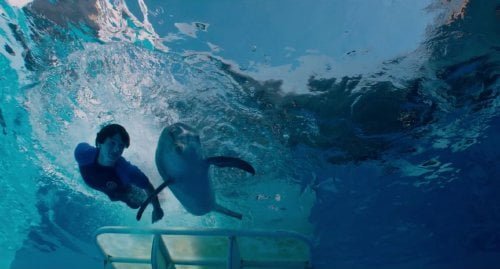 Several years after being rescued and fitted with a prosthetic tail at the Clearwater Marine Rescue Hospital, Winter loses her adoptive mom and becomes reclusive in her grief. The Hospital, now a full fledged Aquarium thriving because of Winter's popularity, is once again faced with losing her due to USDA regulations requiring the social marine mammals to be paired but when a new female bottlenose comes in, Dr. Clay Haskett (Harry Connick, Jr.) is resolute in sticking to his mission of rescue, rehab and release in "Dolphin Tale 2."

The last thing I thought anyone needed was a sequel to the 2011 family film "Dolphin Tale," but as it turns out, writer/director Charles Martin Smith, gifted with more miraculous true events, has turned out another engaging film about injured marine animals and the dedicated people who love them. This one's not in 3D, focusing more on the drama of the events than the dolphin play featured in the first, but there's plenty to engage here, including the antics of the rascally pelican Rufus who gets paired with his own rescued creature. In the first film, young Sawyer (Nathan Gamble) was coming to grips with abandonment, first by his father, then his cousin going into the military. Now he's being offered the chance of a lifetime - the one high school student offered a full scholarship into the 12 week college Sea Semester course, where budding marine biologists cruise throughout the Caribbean observing dolphins in the wild. But this opportunity arises at a critical time, when the now famous dolphin whispering teen may be about to lose his best friend. This developmental drama is the weakest link in the film, although it does allow for prosthetic developer Dr. McCarthy (Morgan Freeman) to deliver a life lesson just before the film's climax. The more dramatic lesson to be learned is left with Haskett's daughter, Hazel (Cozi Zuehlsdorff), whose attachment to Winter clouds her judgement when an injured dolphin in their care has been fully rehabilitated. Hazel wants to keep her as a partner for Winter, but the dolphin is ready to be let back into the wild. Meanwhile Sawyer's injured when Winter gets aggressive over being pushed to come out of her funk. The film is a testament to overcoming disabilities, reinforced by the appearance of the "Soul Surfer" herself, Bethany Hamilton, who continued to surf professionally after losing her arm to a shark. But it's also about hope, embodied here by the baby dolphin rescued so young she hadn't had the chance to develop the skills necessary to survive in the wild. The real Winter returns to portray herself, as do the other dolphins, pelicans and a sea turtle. While it's often discernible when animatronics and visual effects are being used, it's believable enough to give over to the illusion. Although the entire cast has returned, Freeman, Judd and Kristofferson are mostly relegated to the background. Gamble has stepped up Sawyer's confidence, as can be seen when the young Aquarium staff member leads classes for volunteers. Zuehlsdorff has matured as an actress, the over emoting of the first film now settled into showmanship as Hazel becomes the PR face of the Aquarium. She also handles Hazel's unstated attachment to Sawyer, a pretty young volunteer raising the green monster, with subtlety (and sings the film's closing credit song). As in the earlier film, Harry Connick Jr. keeps the ship on a steady course as the dedicated scientist and father, perhaps not the signature role he was dreaming of, but one that fits like a wetsuit. Grade: