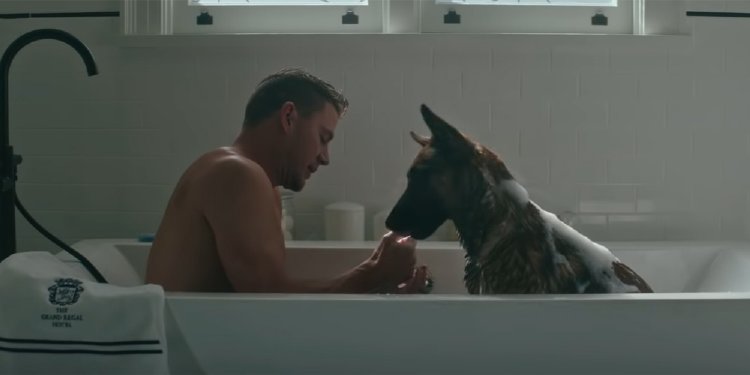 Army Ranger Jackson Briggs (Channing Tatum) longs to return to active duty after suffering a traumatic brain injury.  Sensing an opportunity, his C.O. (Luke Forbes) presents him with a task that seems easy enough on the surface – take his deceased buddy Riley Rodriguez’s Belgian Malinois Lulu, a war hero, on a road trip down the Pacific Coast highway to the man’s funeral.  But Lulu is a bundle of anxiety and her exploits plunge Briggs into all kinds of crazy situations until he learns just why Rodriguez loved his “Dog.”

Except for a very brief cameo in “Free Guy,” it’s been five years since we’ve seen Channing Tatum on the big screen.  His return is also his directorial debut alongside his long time producing partner Reid Carolin, who also wrote the screenplay, inspired by their experience executive producing 2017’s “War Dog: A Soldier’s Best Friend” as well as Tatum’s late, beloved rescue Lulu.  They’ve done a first rate job with the three dogs who portray Lulu, but although the buddy road trip movie is well paced its tone is imbalanced, the film not really beginning to gel until its final fifteen minutes.

Briggs is introduced repeatedly trying to set up military travel without having been cleared to go, while chopping wood at his rural cabin or slinging garbage into a dumpster at the chain sandwich joint he currently works at.  After meeting up with uniformed Rangers to note Riley’s death, he meets Lulu, caged and muzzled, wondering why the dog’s been deemed a problem until she attacks him after he touches her ears.  Still determined to rejoin active military duty, the crated dog is loaded into his pristine 1984 Ford Bronco.  His first stop?  A shooting range.

And therein lies the film’s major problem.  “Dog” is being marketed as a comedy, but few of its ‘comedic’ bits work because Briggs has so little empathy for the dog he knew in combat, which leans into the deeper issue that we never really learn what’s driving Briggs to get back into battle when his injury would so obviously endanger not only him but his brothers-in-arms.  Although the film flows well enough, the presence of “A New World’s” Q'orianka Kilcher in a non-speaking, blink-and-you’ll-miss-her role as Briggs’ ex leads one to surmise that there were parts of this story that got left behind that may have filled in some of these blanks.

So instead we get a former Army Ranger calling a dog suffering PTSD a demon for shredding the interior of his truck after being subjected to gunfire, then trying to navigate liberal perspectives in Portland to get laid (he doesn’t) before having a run-in with weed farmer Gus (Kevin Nash, "Magic Mike XXL") and his psychic wife Tamara (Jane Adams, "She Dies Tomorrow"), who tells him Lulu wants a comfy bed which leads to him impersonating a blind veteran to get a free hotel room where Lulu attacks a Muslim doctor in traditional garb.  One might almost miss that Briggs buys into Tamara’s spiel because of a mention of Sam, who turns out to be someone of great importance revealed at film’s end.  And while the former Ranger’s disrespectful sparring with military M.P.s might be real Army shtick (and gets comedian Bill Burr into the film), Briggs once again shows no empathy for a homeless veteran who steals his belongings.  Lulu, fortunately, rises above all this, but the dog’s greatest gag, a whip fast grab of a water bottle, is revealed in the trailer.

It is ironic that “Dog” begins to work when that truck breaks down in the final stretch of the journey.  There is a hint of the Channing Tatum who wrote ‘The One and Only Sparkella’ in the stuffed unicorn he picks up as a gift, a vulnerability the character has been sorely missing.

In many ways, “Dog” is like the canine answer to the Miles Teller film “Thank You for Your Service” as it depicts the often heartbreaking circumstances these veteran military dogs end up in.  In the end, two damaged veterans heal each other, but the road getting there is an awfully bumpy ride.