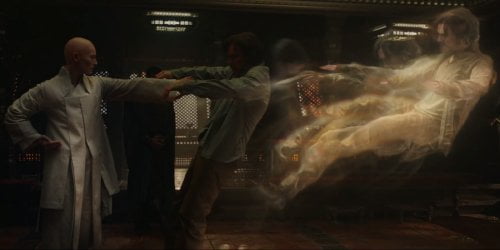 Doctor Stephen Strange (Benedict Cumberbatch) is an extraordinary neurosurgeon with a miraculous pair of hands that allow him to perform surgical miracles. Wealthy and arrogant, he leaves the hospital in his expensive sports car, driving too fast and using his cell phone when something goes wrong. In the aftermath, the doctor’s body – especially his hands – are shattered, ending his career. After years of searching, he travels to Nepal to find a way to repair his damaged digits, not expecting that something magical and menacing is in store for “Doctor Strange.”

Dr. Stephen Strange (Benedict Cumberbatch) is a highly skilled, arrogant neurosurgeon until a car accident destroys the use of his hands. After numerous operations fail to recover his dexterity, he travels to the mystical Kamar-Taj to meet its legendary healer. What he learns instead is that he can help humankind on a much higher level by unleashing super powers under the tutelage of the Supreme Sorceress known as The Ancient One (Tilda Swinton) and is soon skipping across the multiverse fighting the Dark Dimension's Dormammu as "Doctor Strange." Cowriter (with "Prometheus's" Jon Spaihts and "Sinister's" C. Robert Cargill)/director Scott Derrickson's ("Sinister") new addition to the Marvel cinematic universe is much indebted to Christopher Nolan, so much so that one might think one is watching a mashup of his "Dark Knight" series' martial arts with "Inception's" folding cityscapes and revolving rooms. But although "Doctor Strange" is often a 'been here, done that' experience, this origin story is still worthwhile because of the high pedigree of its casting and special effects. Cumberbatch has always projected an aura of academic intelligence, and here he adds focused self regard neatly balanced with deft humor. His entire character is grounded by Rachel McAdams' Christine Palmer, his hospital colleague and exasperated only friend who keeps yanking him back to earth. But these films never work without great villains and "Doctor Strange" has the great Mads Mikkelsen as Dormammu's agent Kaecilius, a warrior sorcerer with a hip hairdo and rocking eye makeup (Cumberbatch, Mikkelsen and Swinton all move with balletic grace throughout). Also on hand is Chiwetel Ejiofor as Strange's mentor Mordo, a calm voice of reason, and Benedict Wong as Wong, Kamar-Taj's comical librarian. Strange's red cape deserves its own credit, a costume prop with personality. If the film's bones come from Nolan, its climax is a cosmic spin on "Groundhog Day." There's a sense of deja vu surrounding "Doctor Strange," but those not experiencing super hero saturation should enjoy its ride. Grade:

First off, I have never been a fan of the Marvel Comics Universe (or, MCU to the fans) so I am nowhere near as praiseworthy as the many reviews I have seen thus far. Obviously, those reviews are undoubtedly by Marvel fans and their opinion counts – to them and theirs. That said, “Doctor Strange” is a noisy, entertaining special F/X extravaganza that will thoroughly please the fans as it sets things up for the latest MCU franchise. Will Doctor Strange join the Avengers in one of their newest members or will he be able to support a franchise alone? These are just some of the things running through my mind, especially when the F/X take over from the story. The story, by director Scott Derrickson and co-writers Jon Spaihts and C. Robert Caegill, is based on the comic book and characters developed by Steve Ditko and it is an adventure into a strange new world. But, without the outstanding cast led by the charismatic Cumberbatch, “Doctor Strange” could have gone by way of the “Fantastic Four” movies – forgettable. Cumberbatch give the right note to a man who knows he is a true master of the medical universe, until fate intervenes. The wealthy surgeon spends nearly all he has in search of a way to regain his former skills. He learns about a man whose spine was smashed in a horrible accident, rendering him paralyzed for life. Somehow, the man was restored to his former self and Strange needs to know how and why. This quest takes him, first to Katmandu, then to a remote monastery in Kamatag. He is saved from a beating by thugs by a mysterious stranger, Mordo (Chewetel Ejiofor), and taken to the Ancient One (Tilda Swinton), the master sorceress who can answer Strange’s questions and guides him on how to heal himself. That is, until an evil interloper, Kaecilius (Mads Mikkelsen), and his zealots penetrate the sanctums of the Ancient One and her minions. Now, let us get back to the talented cast. It is hard to go wrong with those I mentioned above and other well-defined characters, such as Strange’s trainer, Wong (Benedict Wong), a savvy and capable teacher. There is also a side story, almost but not quite a romance, between Strange and his colleague back in his former world, Dr. Christine Palmer (Rachel McAdams), to ground him in the “real” world. The effects are flashy and one technique, shifting the reality of the city landscape, reminds me of “Dark City (1998)” and “Inception (2010)” on steroids. There are many battles royal of the magical kind that will appeal to those in the MCU. For a non-fan just reviewing a movie, it is, as I said, noisy and entertaining.