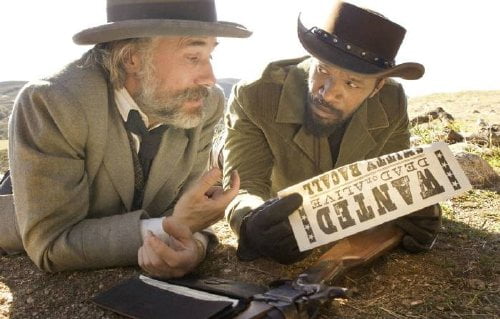 In 1858, two years before the advent of the Civil War, bounty hunter Dr. King Schultz (Christoph Waltz, "Inglourious Basterds"), masquerading as a country dentist, approaches some slave traders to see if they have the man he's looking for, a slave who escaped from the brutal Brittle brothers who can identify them. Schultz finds his man, leaving the white traders dead or as good to and the rest of their stock mystified as to the good luck that just befell them as they see "Django Unchained."

This may be the first Tarantino film which can be classified as an out and out comedy, a very Tarantinoesque achievement given that while the excessive violence is often cartoonish, depictions of slavery are decidedly not, instead so brutal the writer/director struggled with asking black actors to recreate them on U.S. soil. Tarantino lifted Austrian actor Waltz out of obscurity and got him an Oscar rewriting WWII in his last film and the partnership continues to be fruitful as once again playing a German, but this time a good one, Waltz is instrumental in getting revenge against those perpetuating slavery in the Antebellum South. This is Waltz's film, not Foxx's. This Spaghetti Western via Blaxploitation Mandingo revenge film is told in three acts, the first of which is easily the best - the bounty hunters aka 'That's a Black man riding a horse!'. We meet Schultz driving a carriage atop which bounces an oversized tooth advertising his faux trade. Once he's gotten Django and left a bunch of confused slaves with one panicking trader, Schultz lays out his plan - Django will act as his valet until he can pinpoint the men Schultz is after. Schultz will give him a percentage of the bounty and set him free. But after blowing away the Brittle brothers at Big Daddy's (Don Johnson), Django decides he likes what he's seen and the two partner up for a profitable winter, Schultz teaching Django how to read using Wanted posters, as townspeople everywhere they go drop jaws. Schultz hears about Django's wife, Broomhilda (Kerry Washington, a decorative symbol), equates Django to the German Legend of Siegfried and decides that he will help him get his bride back. Tarantino shows the passage of time using a montage set to Jim Croce's 'I Got a Name.' This is all pretty hilarious stuff, from 'Broomhilda's genesis from German owners (who for whatever Tarantinoesque reason changed Brunhilda to the more cartoony version) to Django's idea of what he should wear (he picks an outfit like Little Lord Fauntleroy, a Blaxploitation pimp gene lurking given Broomhilda's family name von Shaft). There's also a run in with a bumbling Ku Klux Klan, infighting because no one can see out of the eyeholes in the Grand Wizard's wife's mask design. But things take a darker turn going into part 2, Candieland, when the dark sport the director's dubbed with a 1975 film references makes its first appearance. Calvin Candie (Leonardo DiCaprio, slyly evil and sly enough to let insecurities wink out of those eyes in the face of the smarter Stephen) prides himself on his Mandingo fighters and when King and Django meet him, his Big Fred is ordered to finish off an opponent with a hammer. Schultz believes the best way to get to Broomhilda is to pretend to be interested in buying one of Candie's second tier fighters for a ridiculous sum and so the two are invited to the plantation. Before they've even made it to the house itself, they see Candie throw fighter D'Artagnan (Ato Essandoh, "Blood Diamond") to the dogs rather than sell him at a reduced price. Django acts imperiously, making Schultz nervous, but he's got his own ideas - 'I'm not antagonizing him, I'm intriguing him,' he tells his mentor. Once at the homestead, where they meet Candie's sister, Miss Lara Lee Candie-Fitzwilly (Laura Cayouette, "Kill Bill: Vol. 2"), and Candie's house slave Stephen (Samuel L. Jackson, made up as the spitting image of Uncle Ben), Schultz begins his ploy, asking about a housemaid he's heard of who can speak German. Against Stephen's objections ('Jesus Christ,Stephen, what is the point of having a 'n' who speaks German if you can't wheel her ass out when you have a German guest?'), Broomhilda is fetched - naked from the 'hot box,' a metal box grounded in the broiling sun. The second act is all shifts and lies and negotiations as we learn that Stephen actually rules this roost, manipulating one and all. This middle act begins to get weighed down by too much talk, and all the air is almost sucked out of the film with the loss of one of the players. The film's third act, after Django has been sent to certain doom by Miss Lara (under the supervision of the director himself as a badass Aussie) ends in an over the top bloodbath. If you enjoyed seeing a bunch of Nazis torched en masse.... 'Say goodbye to Miss Lara' indeed. Tarantino was famously working on getting a 192 minute cut of the film whittled down to make his release date and the film feels rushed, its flow from the midpoint on choppy. But this is still entertainment as only Tarantino can make it with its outrageous flaunting of political correctness and enthusiastic embracing of grind house cinema (the film even begins with a 70's era Columbia logo). Although the director himself nods to Sergio Corbucci, director of "Django," we can see him employ Leone's signature close up montages and fast zooms. The score and song selections are a boon as always from the aforementioned Croce tune to the borrowed theme of obscure Kinski Western 'His Name Was King' to Rick Ross's original hip hop song '100 Black Coffins.' Casting is, of course, a gold mine for those in the know with "Django's" Franco Nero making a cameo and Russ Tamblyn as 'Son of a Gunfighter' (and his daughter Amber as 'Daughter of a Son of a Gunfighter').