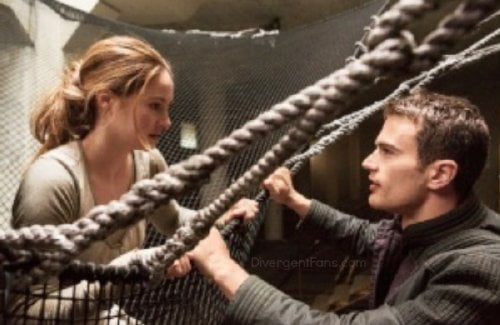 Beatrice Prior (Shailene Woodley, "The Spectacular Now") informs us that people are lucky to live in Chicago after most of the world was destroyed. An enormous fence protects the remains of the city where people are divided into five factions based on personality traits. The Prior family are Abnegation, the selfless group chosen to run the government, but the Erudite, the most intelligent, may be trying to overthrow them. During these unsettled times, Beatrice and her brother Caleb (Ansel Elgort, 2013's "Carrie") must be tested before choosing their faction in a public forum. Beatrice chooses Dauntless, the wild daredevils who protect the populace, but, in fact, she's hiding a dangerous secret - she's actually "Divergent."

When creating a post apocalyptic world with its own rules, it's essential to provide the rationale for how its new order has formed. In "The Hunger Games," even though the first film wasn't great, we understood how things had developed to arrive at its current state. But with "Divergent," which already suffers from being late-to-the-party, its story too similar to "Games's" divisive Fascism themes, we're given no idea how or why most of the populace's personalities can be put into one of five baskets (the other two are Amity, this civilization's farmers, and Candor, the law). Screenwriters Evan Daugherty ("Snow White and the Huntsman") and Vanessa Taylor ("Hope Springs") utilize opening voice over to bring us up to speed, but seem to have missed elements of Veronica Roth's novel. At least this one doesn't feature a love triangle. But there is, of course, a love interest. Newly named Tris may be the first transfer (as opposed to those who mostly stay within their family faction) to volunteer to jump into a seeming void, but she struggles becoming a Dauntless and Eric (Jai Courtney, "A Good Day to Die Hard"), the trainer of the 'natural' group, has decided that not everyone will make the cut this time around. Those with the lowest training scores will be rejected, becoming one of the 'factionless,' the homeless who struggle to survive. But there is a clear spark between Tris and her trainer Four (Theo James, "Underworld: Awakening"), who seems to recognize but not acknowledge her secret. Four may just have a secret of his own and its not just his fear of heights. After being badly beaten in a training fight, Tris pushes herself to join the last training battle, despite the fact that Eric's already dismissed her. When she is largely responsible for the Transfers' win, she's treated to an initiation rite - a zip line ride high above and through the city which is the film's best set piece (it's surprising the film wasn't shot in 3D for this sequence alone). But there is still one more test to go - the public facing of one's fears, accomplished by a hallucinatory drug trip which can be viewed by others on giant monitors. Four helps Tris practice with an idea right out of "Pacific Rim," as the revelation of her divergence (traits from more than one faction) would be a death sentence. Director Neil Burger proved a capacity for visualizing bizarre head trips in "Limitless," but his production here seems half-realized. Tris's zip line ride is far more terrifying than anything she encounters facing her real fears and she lives in a world that's an odd mix of high and low tech. Chicago's 'ruin' is depicted by dry lake and river beds and partially demolished skyscrapers with only the Navy Pier giving any sense of its diverse architecture and neighborhoods. Even costume design (Carlo Poggioli, 2013's "Romeo and Juliet"), such a notable aspect of "The Hunger Games," is flat, the Abnegation's garb far more interesting than the drab pantsuits of the Erudite or simple, sleek black of the Dauntless. Woodley and James are an attractive couple, and Woodley's physical limitations give us something of a rooting interest, but neither make a strong enough impression to hang blockbuster status on. As the Erudite who's behind all the evil goings-on Kate Winslet is "Elysium's" Jodie Foster without the accent, blond and frosty. Ashley Judd conveys warmth and worry as Tris's mom, but Woodley's "Spectacular Now" costar Miles Teller is relegated to bullying Dauntless. As tattoo artist/tester Tori, Maggie Q ("Live Free or Die Hard") looks fierce and plays her cards close to the chest. The film wraps with rebellion and battle, but its final scene is a rag tag suggestion of the coming sequel. But will anyone be waiting for it? "Divergent" is a forgettable also-ran.