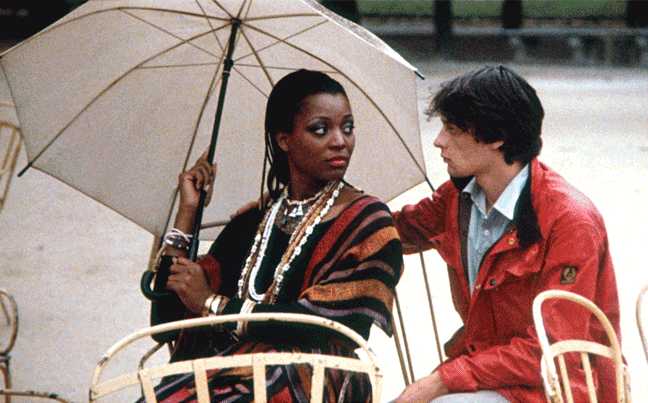 Young postman Jules (Frédéric Andréi, "Venus Beauty Institute") makes himself a perfect opera bootleg, but he's been observed by another member of the audience. Later, a woman running from two thugs drops a second tape into his mailbag and he becomes entangled in plot that involves a prostitution ring, Taiwanese recording execs, a philosopher who dreams of stopping the waves and the opera star who believes music is fleeting and should not be recorded, Cynthia (Wilhelmenia Wiggins Fernandez), a true "Diva."

When I saw "Diva" back upon its original 1981 release, it was a true 'wow,' a filmic equivalent of the post-punk new wave music scene that was current. The rather cliched plot of an Everyman becoming embroiled in criminal events due to a mix-up of two objects was made fresh with its hook into youthful obsession for concert bootlegging, the punk rock thug played by the then hip Dominique Pinon ("Delicatessen," "A Very Long Engagement") who turned out to be a fan of bourgeois French polkas and the chic Bohemian philosopher, Gorodish (Richard Bohringer, "The Last Metro," "The Cat's Meow"), who lived in a loft with wave machines and a young Vietnamese woman, Alba (Thuy An Luu), who roller skated around his apartment. After twenty-five years, the film still retains its place in cinematic history, but there is no denying that it seems a bit dated now. This is partially because "Diva's" influence is familiar from other films. The delightfully weird and quirky have become more commonplace, as have more stylistic art direction and pop art cinematography ("Diva was shot by Philippe Rousselot, "Peppermint Soda," "A River Runs Through It," "Charlie and the Chocolate Factory"). Wilhelmenia Fernandez is very stiff as an actress, a sore point in an otherwise fluid ensemble. Thankfully she is nonetheless a sympathetic character of terrific voice and does put across the film's wonderful ending where, due to Jules, she hears her own voice for the first time. The film is also overlong. Rialto Pictures has been on a roll with a terrific slate of reissues, from "Au Hasard Balthazar" to "Army of Shadows" and the complete surprise that was "Mafioso." Those films were masterpieces. "Diva" is a standout film of the 1980's but falls short of masterpiece status. It is nonetheless a barometer of its time and a valentine to the City of Lights. B+ Robin: Robin also gives "Diva" a