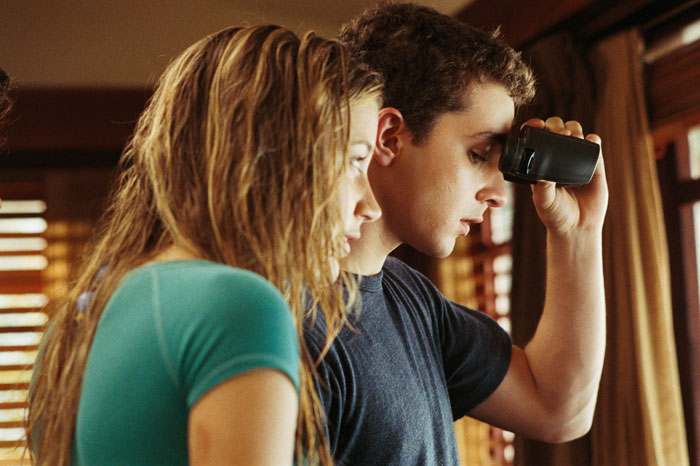 Kale (Shia LaBeouf) has had issues since the tragic death of his father just a year before. He strikes out at his high school Spanish teacher, earning him a court-ordered home detention. Electronically tethered to the house, the teenager starts observing the comings and goings of his neighbors. His surveillance of one neighbor, in particular, makes him suspect that the man is an elusive serial killer reported on the TV news in “Disturbia.”

Rear Window” for teens is a good thumbnail description of this slick little thriller as home-bound Kale watches his neighbors and builds the case, in his mind, that next neighbor Robert Turner (David Morse) just might be a murderer. He enlists the help of his best friend, Ronnie (Aaron Yoo), and pretty, just moved in neighbor, Ashley (Sarah Roemer), to dig up the evidence he needs to prove his case. The film updates the cameras and binoculars Jimmy Stewart utilized in “Rear Window” with high tech surveillance gadgetry like hi-def video and computers as Kale’s arsenal of observation. The likable cast helps things along, too, with Shia LaBeouf holding his own as the central character. Sarah Roemer is pretty, smart and sexy as Kale’s confidant and budding love interest while Aaron Yoo has fun as the comic relief sidekick. David Morse lends a proper sinister air as the relentless killer. Carrie-Anne Moss is saddled with the thankless role as Kale’s single mom. Techs are good with director D.J. Caruso doing a solid job telling the story by Carl Ellsworth and Christopher Landon. Camera, by Roger Stoffers, helps keep the thriller moving along with its variety. Set design, especially Kale’s home prison, has personality. Disturbia” is a decent entry in the killer thriller genre that will appeal to teens and beyond.