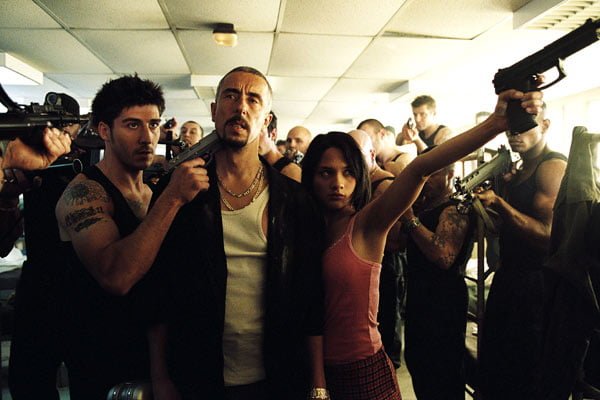 Paris, 2010. A section of the beautiful city is under the control of drug-dealing bad guys and the cops are pulling out behind the protective wall that surrounds the notorious ghetto. When an experimental neutron bomb is stolen by the warlord in the cordoned off criminal enclave, two very special men are sent into harm’s way to disarm the deadly weapon hidden somewhere in “District B-13.”

Long-time cinematographer Pierre Morel (“Unleashed”) makes his directing debut work with a script by renowned Luc Besson and Bibi Naceri. His first effort, District B-13” is a stylized action flick that combines futuristic what-the-world-has-become (or, at least, a small part of it in Paris) where the criminals take over and the police abandon the district along with action bits that would make Jackie Chan proud. Leito (David Belle) is a vigilante resident of the district who takes the initiative to thwart the criminal element by destroying the drugs they dole out to the B-13 residents. The honcho of the ghetto, Laha (co-scripter Naceri), has his heavily-armed henchmen take chase in a dazzling display of stunt choreography (about 90% of the amazing stunts are done without CGI effects or wire work) as the bad guys pursue Leito up walls, down the sides of buildings and over rooftops. He almost escapes until the cops come on the scene to arrest everyone. Leito thinks he’s safe at the police station - until they bring in his sister, Lola (Dany Verissimo). He is tossed into a holding cell as Laha makes a deal with the head cop – the police can lock up Leito and throw the key away and Laha will keep Lola as his “pet.” Jump forward six months to a police raid being led by uber-cop, Damien (Cyril Raffaelli). He and his men kick criminal butt and Damien proves both fearless and extremely capable. He is taken off the line by his colonel (Patrick Olivier) and introduced to Commissioner Kruger (Francois Chattot). There’s a big problem brewing and Damien is the only cop capable of handling it: the hijacked neutron bomb is in Laha’s hands and Damien is to enter district B-13 to disarm it. But, there is a catch. Damien is teamed with Leito, who has spent the last months in prison while Lola has been, literally, kept on a leash. The tough cop is none too happy to have a hardened criminal at his side on such a dangerous mission but orders are orders. And, Leito knows B-13 like the back of his hand. Together, they infiltrate the district to search for and disarm the deadly bomb. Little do they know that Kruger has a hidden, destructive agenda. Besson and Naceri have created a fast-paced actioner that has not an ounce of excess fat in its 85 minute run time. The story is on the light side – I won’t delve too deeply into the tale so it will be a surprise the viewer – but that doesn’t matter. It is there to be the glue that binds the many, extensive action sequences as Leito and Damien battle the bad guys, find the bomb and rescue Lola. Dialog, as expected, is sparse, letting the action tell the story. Former stuntman Raffaelli and Parkour-master Belle (Parkour is a form of martial arts that has an accent on fluidity of physical movement at its core) are a remarkable pair, doing their own amazing stunt work. I haven’t seen such innovation and mastery since Jackie Chan’s younger days, making me hope that this is the beginning of a renaissance of physical stunts instead of computer gimmickry. I have always lamented the fact that the physical grace of stuntmen (filmdom’s unsung heroes) has been generally replaced by CGI, tossing the stunt artistry away. It is a wonder to see the art in such a full-blown and exciting manner in “District B-13.” First time helmer Morel lends an assured hand to the proceeds as his lead characters do battle with the baddies. Naceri is evil personified as head honcho Laha but is overshadowed by his right hand man, K2 (Tony D’Amario), a big, bruiser of a guy who displays terrific screen presence in an amusing, if violent, way. Dany Verrisimo’s Lola (who has been steadily fed heroin by her captor for six months) recovers from her ordeal quite quickly as she lucidly fights back, too. The rest of the cast fills in their spaces quite well. But, it is about the look of the film and the quality of the action that is the draw to “District B-13.” Morel gives lensing chores to veteran cinematographer Manuel Toras and he does a fine job in capturing the amazing stunts-galore action. Production designer Hugues Tissandier does a splendid job creating the walled-in B-13 ghetto. It’s a good-looking film with a good-looking cast that tells its story with excitement and vigor. District B-13” is, in a word, a hoot.