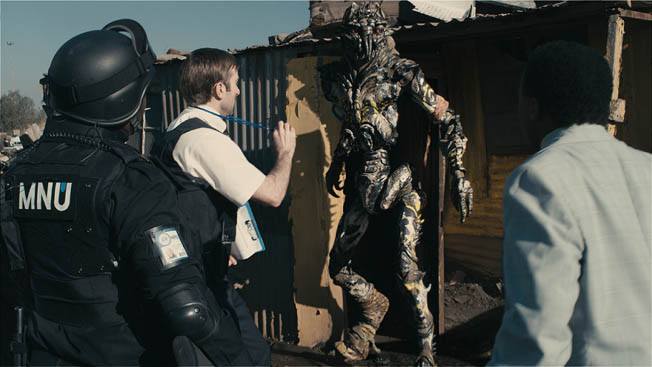 Twenty years ago, the earth watched in suspense as a giant spacecraft appeared over Johannesburg - and then did nothing. Scientists and engineers eventually drilled through the exterior to discover a million starving insect-like aliens. With the world watching, the South Africans created a camp where the creatures could live, but over the years the human residents of Johannesburg have become fed up with the unruly residents of "District 9."

Producer Peter Jackson ("The Lord of the Rings") champions first time feature director Neill Blomkamp, expanding upon his short "Alive in Joburg," and it is an impressive debut. With clear parallels to Apartheid, Blomkamp and cowriter Terri Tatchell have created a sci-fi parable about bigotry and corporate greed that, backed by Jackson's special effects house WETA, brings a whole new world to the Science Fiction genre. Although Blomkamp and company have obviously drawn from previous films including "Close Encounters," "Enemy Mine," "Aliens," "Starship Troopers and even a dash of "I Am Legend," their film is the first in a long while that shouts out for series treatment à la "The Terminator" and "Alien." Perhaps Blomkamp's greatest creation is his nebbishy reluctant hero Wikus Van De Merwe (Sharlto Copley), an Afrikaaner (South Africa's racial equivalent to the Southern redneck) who favors sweater vests, polyester ties and short sleeved dress shirts. Wikus happens to be married to one of Multi-National United's (MNU) top guys and it is his father-in-law who promotes Wikus to head of Field Ops to evict the now 1.8 million 'prawns' (the derogatory but visually accurate name for the aliens) from their shacks in District 9 to District 10, a tent city much farther removed from Jo'burg. MNU is also trying to figure out how to utilize the aliens' weapons, which require their DNA to be operated, so when Wikus is infected by precious alien fuel he finds in the workshop of an alien named Christopher Johnson (Jason Cope) and begins to turn into one of them, MNU becomes more interested in his parts than his whole. Now hunted, Wikus hides in District 9 and gains some startling insights into Johnson, Johnson's young son C.J., and their kind. Blomkamp and his production team were blessed by finding a shantytown on the outskirts of Soweto that, like in the film, was being relocated, that became their location. Shooting in winter lent the area an even more dreary look of junk, huts built from junk, and dirt. The aliens are seamlessly integrated into the landscape. Created from a combination of CGI and prosthetics, the prawns are taller than humans with exoskeletons and exposed, fleshier joints, waists that are little larger than the backbone they encompass and heads that resemble a grasshopper crossed with "Predator." Their eyes, however, are large and expressive, more in the "E.T." vein if not exactly cute making. The film is shot as a docudrama, beginning with one of a continuous stream of newsfeeds, much from real South African Broadcasting Corporation footage. Various 'experts' provide perspective in talking head interviews. The aliens are not only segregated and kept down by MNU, but exploited by a group of Nigerian mercenaries headed by the notorious crime lord Obesandjo, who scams them for outrageous sums for their favored cat food and believes he can ingest their power by consuming them, and we meet this group in documentary fashion with newscaster voice over. Blomkamp does not break out of reality TV mode until he is forced to, taking us inside the home of Christopher Johnson to make us privy to the alien plan (twenty years of searching throughout their junk heap has yielded just enough alien fuel for Johnson to power a missing piece of the spacecraft back to its source to ferry the aliens home). Despite his strong moral message, Blomkamp understand the importance of humor, most evidently in his creation of Wikus. That Wikus is married to a beautiful blond (Vanessa Haywood, a Miss South Africa finalist, as Tania) points to the social segregation at play, but her total devotion to him is also amusing, especially the sentiment she bestows upon his handmade presents which look like nothing so much as a six-year-old's output. The aliens themselves, who speak their own language but are seemingly understood, have become devious of necessity except for little C.J. who inexplicably is drawn to Wikus. Van De Merwe's favorite restaurant is a fast food joint with unidentifiable product called Gunther's. Rubber tires, objects with horrific Apartheid overtones, are another of the aliens' favorite foods. It's a very smart screenplay, a "Black Like Me" version of "Tsotsi" cloaked in genre trappings. The film isn't perfect. At 111 minutes, it's a little long, its ending drawn out a bit, and MNU 'bad guy' Koobus Venter (David James) is a stereotypical sadist. But "District 9," even with familiar elements, is a unique, visually distinct world and the film leaves us wanting more and it sets itself up for just that.