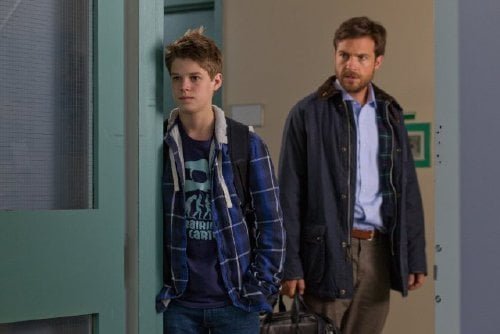 Rich Boyd (Jason Bateman, "Identity Thief") is a workaholic lawyer more tied to his phone than his family. His bullied son Ben (Jonah Bobo, "Crazy, Stupid, Love.") is delighted when a girl named Jessica becomes a Facebook friend professing to love his music. But Jessica is really Jason Dixon (Colin Ford, "We Bought a Zoo"), a more popular kid whose own dad has been keeping a distracted rein on the boy. Mike Dixon (Frank Grillo, "The Grey")'s investigating a case of stolen identity for bereft parents Cindy (Paula Patton, "Precious") and Derek Hull (Alexander Skarsgård, HBO's 'True Blood') while Rich Boyd is called in to determine whether reporter Nina Dunham (Andrea Riseborough, "W.E.") is legally obligated to reveal the identity of the underaged online sex worker she's just profiled in "Disconnect."

Henry Alex Rubin makes his feature directorial debut (following his 2005 documentary "Murderball") with Andrew Stern's look at intersecting lives all engulfed by the increasing noise of social media and hand held Internet devices. As is often the case with multiple, crossing story lines, results are uneven, the film's theme organic to one, cliched in another, forced in a third. Call this one 'Cyber-Crash.' By far, the Boyd 'Facebook and Smartphone' story is the strongest. Bobo is terrific as a scared and lonely kid whose ambitious dad scoffs at his musical ambitions and who is the target of school bullies Jason and his friend Frye (Aviad Bernstein). Once the faux Jessica enters the picture, Ben blossoms while Jason and Frye laugh at his expense. But the aggressive Frye pushes the ruse too far and the more sensitive Jason wavers. When his actions have a very unexpected consequence, Jason reaches out - to Ben's dad. Bateman is also strong here as a father who gets a wake up call that makes him look inward. Stern throws an unexpected twist into the Hulls' identity theft story, but almost everything else about it is obvious. Casting Skarsgård as a pasty-faced, slump-shouldered salesman worried about his job certainly goes against type, at least until his back story provides impetus for this thread's explosive climax. Having lost a child in infancy, Cindy's turned to an online grief site where she meets a man who's lost his wife. He provides more comfort than Derek, who's become withdrawn. When their bank accounts are drained and credit cards maxed out, they hire Mike, who suspects Cindy's correspondent. The conclusion one draws - that a married couple should talk to one another - is hardly surprising. Michael Nyqvist (Sweden's "The Girl with the Dragon Tattoo") is effective shading first one way, then another. Nina's online sex and cloaked identity story is the most untethered from the others and has the most ambiguous message. She finds Kyle (Max Thieriot, "House at the End of the Street") online and willing to indulge her fantasies. Smelling a story, she convinces him to be interviewed with his face obscured, promising his identity will be kept secret. Then the F.B.I. steps in and Kyle's in danger of being found out by his house employer. What's the point here? That play acting on the Internet can have dangerous consequences? That isn't the root of the problem, even though there is the implication that Nina's a bit turned on. This one seems best summed up as 'don't try to shine a light on exploitation of a minor because that minor might be found out.' Riseborough's a rising star, but this ensemble role is a throwaway for her. Thieriot fares better. Even the Boyd story has its problems. Rich's tie to Nina's story is forgettable and unnecessary for anything but the writer's need to connect his characters and Rubin makes a fatal mistake by going slo mo for its violent climax, turning a shocking moment into an almost laughable cliche (complete with violin score). The filmmakers also corrupt their own theme by the unreasonable amount of time they allow to elapse before Ben's older sister Abby (Haley Ramm, "Red State"), presumably in the same school system, catches wind of a viral meme. Hope Davis ("The Secret Lives of Dentists") has the thankless role of concerned mom. "Disconnect" doesn't tackle anything new and tries too hard to make points we can see a mile away. When it does work, credit actors who deliver real human connections.