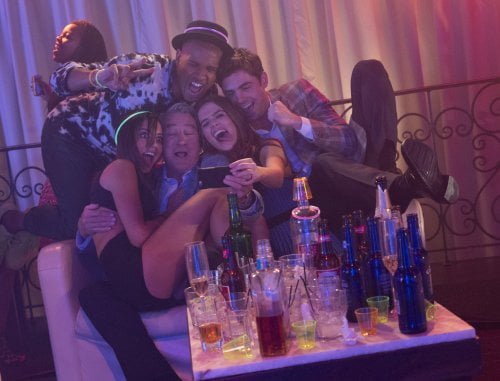 After the death of his beloved grandmother, Jason Kelly (Zac Efron) doesn't understand why his grandfather Dick (Robert De Niro) insists he drive him down to Boca. It's only a week before Jason's wedding to his boss's daughter Meredith (Julianne Hough, "Footloose," "Rock of Ages"), but he relents for some overdue bonding time. But when the man he picks up is found drinking Scotch while pleasuring himself, intent on a sexual conquest after being denied for 15 years, Jason's shocked by his "Dirty Grandpa."

Fledgling screenwriter John M. Phillips used his own experience discovering his dad could be a real ladies' man as the basis for his script, but rather than explore the comedic possibilities of that reality, he's come up with an overly busy contrivance that mistakes inappropriateness and excessive raunch for wit. If the idea of Robert De Niro saying 'vagina' a lot or visual gags that portray Efron as a pedophile are your idea of funny, "Dirty Grandpa" will fit the bill. With the exception of Cousin Nick (Adam Pally, TV's 'The Mindy Project'), the stoner black sheep of the family, the Kellys are a proper bunch. Jason's followed father David's (Dermot Mulroney) footsteps into his firm after giving up his dream of professional photography and will tell anyone who listens that he enjoys corporate law. His fiancee is a controlling Bridezilla with every hair and pearl in place. After a stop for a round of golf where Dick begins to show women his swings and belittle his grandson, the two stop at a diner where Jason runs into an old photography classmate, Shadia (Zoey Deutch, "Beautiful Creatures"), who is heading to Daytona for Spring Break with friends Lenore (Aubrey Plaza) and Bradley (Jeffrey Bowyer-Chapman, TV's 'UnREAL'). Noting their chemistry (just as he noted Meredith's inappropriateness), Dick concocts a cover as a university professor researching a story for Time with his photographer. And it just so happens that Lenore's hoping to complete her trifecta of bedding a Freshman, alumnus and professor. Oh happy coincidence. Off to Daytona they go. What follows is hedonism on a grand scale with Jason drugged, duped, arrested (twice) and paraded in a series of embarrassing ensembles. They're dogged by drug dealer Tan Pam (Jason Mantzoukas, "Sleeping with Other People"), gang banger Tyrone (Brandon Mychal Smith, TV's 'You're the Worst'), muscle heads Cody (Jake Picking) and Brah (Michael Hudson) and apparently the only two cops in Daytona, officers Reiter (Henry Zebrowski, "The D Train") and Finch (Maureen “Mo” Collins, "The 40-Year-Old Virgin"). In true "Hangover" fashion, communications with the family back home go seriously awry, Jason having to explain away such mysteries as the penis swastika inked on his face. When he finds himself having to share a bed with his nude grandpa, Jason warns he'd better not feel his 'junk' only to turn and find a penis on his pillow - utter hilarity (this type of 'humor' abounds in "Dirty Grandpa" - it doesn't seem to matter that it makes no logistical sense). Efron remains likeable and is clearly willing to go just about anywhere for a laugh (it probably helps having a buff bod). But it is a shame that so much young talent, thrilled I'm sure to be working with De Niro, have gotten this De Niro, the shameless hack. Aubrey Plaza, whose character's goals randomly switch from professor to any old dude, is reduced to slutty leering and twerking (and a cringe worthy sex scene with De Niro). As Dick's estranged son, Mulroney has nothing to do. Director Dan Mazer's (producer/writer "Borat") taste is up for debate, but his production is serviceable. He reaches for a "Graduate" homage in the staging of his penultimate scene at Meredith's much ballyhooed rehearsal dinner and Hough serves him well here, her overly dramatic song rendition funnier than anything projected behind her (shades of "The Hangover" again). But overall, "Dirty Grandpa's" modus operandi is that poor taste may be swept under the rug with a heaping spoonful of sentimentality. The Jackass guys, whose "Bad Grandpa" runs rings around this one, could teach Mazer a thing or two. Grade: