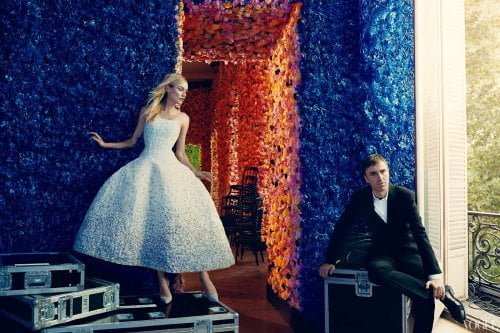 When Raf Simons was named the new artistic director of the Christian Dior fashion house in 2012, he faced the daunting task of creating the spring couture collection in a scant eight weeks. Director Frédéric Tcheng had unprecedented access to the behind the scenes creative process, from fabric creation to the seamstresses who realize Simons' vision, all feeling the presence of the man who is their inspiration in "Dior and I."

The shapers and shakers of the fashion industry have been on the big screen quite a bit in recent years, from dueling French feature films on designer Yves Saint Laurent to a duo of docs on fashion magazines and the women who steer them ("The September Issue" and "Diana Vreeland: The Eye Has to Travel"), one of whom inspired "The Devil Wears Prada." Back in 1995, Isaac Mizrahi's then boyfriend profiled him creating his 1994 Fall collection in "Unzipped." That film was fun, but "Dior and I" is something a bit more special as Tcheng creates a spectral presence of the man whose giant shoes Simons, a former furniture designer and Jil Sanders ready-to-wear Artistic Creator, attempts to fill as the whole world watches. The film begins as Dior's chief executive Sidney Toledano introduces Simons to the troops, stating that where the unassuming Belgian designer prefers 'Raf,' he may still be called Monsieur. Raf and his assistant, Pieter Mulier, begin by visiting the ateliers, the beautiful old Parisian garret spaces where the actual work is done. The atelier for suits is run by Monique, self-described as anxious, while the premiere for dresses is the younger Florence, a down to earth woman who forms a mutual admiration club with Pieter. Tcheng cross cuts between Omar Berrada (a former French National radio host) narrating Dior's memoirs to archival photos and Simon, studying classic Dior of the 1950's in order to modernize it. This exceptional structure allows the past to continue informing the present, reaching a climax after lights out in the ateliers, Tcheng projecting old Dior imagery over the white toiles that are the blueprints of Simons' first collection. As we hear Dior's own words explaining his artistic choices, we watch Simons sketching, draping, even reaching back to Dior's warp printing technique in which the threads were printed with the design before being woven into the fabric (Simons uses the abstract paintings of Sterling Ruby, which he describes as 'Gangsta Rothko,' for his design). There are small intrigues, such as Simons' inexperience in the workings of the ateliers causing much anxiety with his abbreviated schedule, especially when Florence is sent to NYC to deal with a client the day before her atelier's fittings (the premieres of these workshops are always balancing new collections with actual client orders). As models are cast for the runway show, there is a small subplot for Esther, a young woman making her first ever runway appearance. Simons idea for his runway space is stunning, but extravagant. When it is approved, his nerves turn towards the idea of having to walk the space himself. The night before the big show, the ateliers are up all night as we watch an entire round table hand sewing beads onto one garment. If you've ever wondered why couture can run tens of thousands of dollars, "Dior and I" will be an eye opener. The film is intimately and elegantly shot by Gilles Piquard, accompanied by inventive, ever changing musical compositions by Ha-Yang Kim, whose work here is so non-traditional yet so complementary to the imagery on screen, it should be remembered at year's end. Tcheng ends his documentary quite traditionally with the culmination of all this hard work, on display for the likes of Anna Wintour, Marion Cotillard and Jennifer Lawrence. Harvey Weinstein's also there and while we don't know if he ordered any dresses, it's surprising he didn't pick up "Dior and I." Grade: