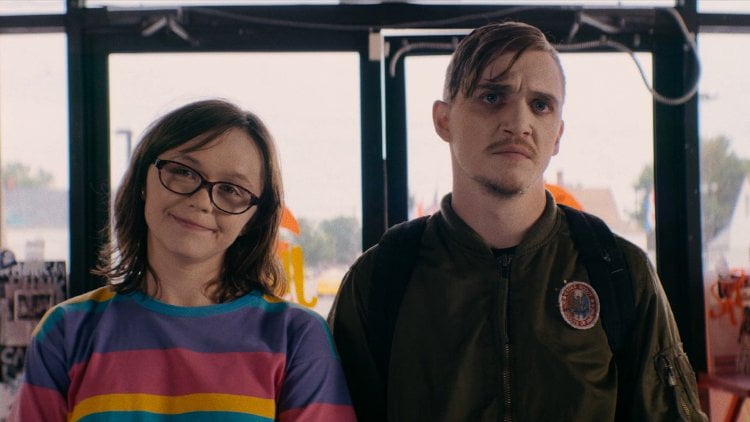 When Simon (Kyle Gallner, "American Sniper") is kicked out of a drug trial he ends up following his fellow failure Beth (Hannah Marks, "Banana Split") home where he’s caught by her dad Bill (Nick Chinlund) getting it on with her mom Betty (Lea Thompson)       .  Thrown out again, he lights a match, then quickly finds haven in the bedroom of Patty (Emily Skeggs, "The Miseducation of Cameron Post"), a twenty year-old social misfit bullied by everyone.  Their unlikely alliance takes many surprising turns as writer/director Adam Rehmeier paints three different family portraits via “Dinner in America.”

This is a movie that dares you to dislike it, opening with a blast of bad taste, worse behavior and seemingly irredeemable characters.  But Rehmeier has something up his sleeve for those who weather his initial storm, his snarling punk protagonist turning gallant when confronted by someone weirder than he is.  What begins as an unpleasant satire of American life turns into a sweet romance without ever sacrificing its punk aesthetic.  Propelled by a warped, rhythmic percussive score and two inspired performances, “Dinner in America” is a true original.

Before Simon enters her life, we meet Patty, a seemingly slow witted adult treated like a child by her ridiculously straight parents Norman (Pat Healy) and Connie (Mary Lynn Rajskub), who deny her the one thing she’s desperate to do – attend the local Alliance concert with two friends.  She vents her frustration in her room, thrashing to a punk record before furiously masturbating, documenting the latter with a Polaroid.  Patty’s in the habit of writing mash notes to this band’s lead singer, John Q, accompanied by her panty pictures, and, we will find out, they are Psyops, the opening act for The Alliance.

Simon turns on the charm to get into Patty’s parents’ good graces, praising Connie’s cooking and inventing family missionary work in Tanzania.  When the two track-suited jocks who torment the young women do it in his presence, his attempt to take them on physically fails spectacularly, but he devises a humiliating (and amusing) comeuppance.  He stands up for her again with her boss at the pet store.  Grabbing her journal, Simon reads Patty’s poetry and declares her a genius.  A secret revealed leads to an exuberant, fruitful collaboration.

Rehmeier’s stuffed his screenplay full of quirky lovers’ in-jokes (‘take it down a notch’) and bizarre asides (a ‘Hawaiian’ lunch, a dead cat), adding flavor to his romance-worth-rooting-for.  Gallner’s found the perfect mix of outer aggression and inner softness to win us over.  Skeggs deploys geekiness by squinting her eyes and drawing her head back into a double chin, sweetness with a naïve unawareness of her own weirdness.  The actress also has the kind of pretty singing voice that matches well with hardcore punk, pulling off lyrics like ‘your tongue tongue in my ear drum drum’ with panache (a Best Song contender if anyone would listen, as nervy as it is worthy).

There is a third family dinner that helps explain Simon, the title also referring to Patty’s favorite Psyops album.  “Dinner in America” is hard to classify, like a Todd Solondz provocation cut with Adam Sandler’s juvenile sweetness.

Simon (Kyle Gallner) thinks himself the purest of punk rockers and lives the code and the ‘tude. Plain Patty (Emily Skeggs) is 20 years old, lives with her parents and gets no respect – from anyone. When these two misfits cross path, it turns out to be their destiny in “Dinner in America.”

I did not know what to expect from this quirky little indie movie by writer-director Adam Rehmeier and, I have to say, I am pleasantly surprised. When we meet Simon, he is in a hospital. Is it an insane asylum? No, but it is a drug trial that the volatile Simon screws up and is thrown out of. And, because he screwed up, he does not get all the money promised, despite his loud and profane protestation.

Patty is a bit chubby, shy and picked on by everyone. But, when she is alone in her room and playing her favorite punk band, Psyops, she become hard core. And, she writes love letters, with provocative Polaroids, to band lead John Q. Public. This comes into play later so pay attention.

Leads Gallner and Skeggs have a wonderful chemistry as misfit toys and kindred spirits. His loud, abrasive behavior is tempered by the sweetness that pervades Patty’s personality. It becomes Simon and Patty against the world and I am on their side.

"Dinner in America" is featured in Nightstream 2020, a virtual festival running from 10/8-11 that is a collaborative virtual festival from Boston Underground, Brooklyn Horror, North Bend, Overlook and Popcorn Frights.