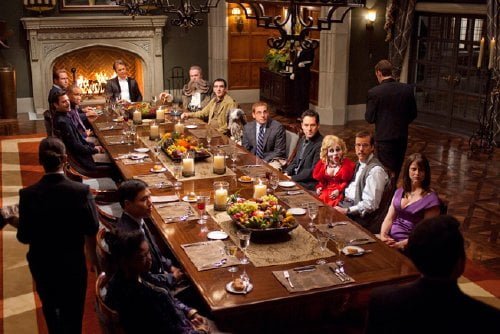 Tim (Paul Rudd) and his advertising agency colleagues on the sixth floor covet the possibility of getting an office on the prestigious seventh floor where the big boys play. He proposes a plan to convert munitions from a Swiss arms manufacturer into desk lamps and the client loves the idea. He just has to pass one test – bring an idiot to his boss’s “Dinner for Schmucks.”

Financial analyst Tim (Paul Rudd, "I Love You, Man") is angling for a promotion so that his live-in girlfriend, art curator Julie (Stephanie Szostak, "The Devil Wears Prada"), will finally accept his proposal of marriage. When he impresses the boss with a pitch to bring on an eccentric Swiss multi-millionaire as a client, things look up, but there's a hurdle that Julie will not like - Lance Fender (Bruce Greenwood, "Star Trek") has a monthly party where his top men compete by bringing the biggest idiot they can find for their private amusement, a "Dinner for Schmucks." French writer/director Francis Veber has long been the go-to guy for Hollywood remakes like "The Man with One Red Shoe" and "The Birdcage." Here his 1998 "The Dinner Game" is adapted by David Guion & Michael Handelman ("The Ex") and directed by "Austin Powers'" Jay Roach ("Meet the Fockers") and it is the rare remake that is as good as the original. Only I wasn't all that hot on the original. The entire concept of an 'idiots dinner' is a pretty ugly one, but Jay Roach soft pedals things with sentiment. Unlike the 'Tim' character in the original, Paul Rudd manages to keep Tim likable even when he's doing not very nice things. Instead of a weekly dinner that he enjoys going to, here the 'hero' is going against his grain for one objective. The remake also features more supporting players, with such comic maestros as Jemaine Clement (HBO's "Flight of the Conchords") just killing as egotistic artist and potential romantic rival Kieran and "The Hangover's" Zach Galifianakis getting his weird on along with his orange turtlenecked dickey. Be warned, however, that it is well past the 90 minute mark before we ever get to that titular dinner, and once there Roach seems too enamored with it to end his film. The film's opening credit sequence is a charmer. We see hands employed in the construction of a landscape tableaux of mouse couples all engaged in romantic pursuits. This is I.R.S. accountant Barry's (Steve Carell) hobby, but unlike the original film, whose idiot built famous structures out of matchsticks, Barry's hobby illustrates a personal tragedy, something Tim won't learn until well after Barry's sabotaged his life. Tim's made up his mind to not accept Fender's invitation when he hits a man in traffic. That man is Barry who was intent on trying to save a mouse and who is unharmed, but clearly dancing to his own tune. Once he shows Tim one of his pieces, The Last Supper recreated with mice, though, Tim thinks he's been sent a sign from God. After all, his 'idiot' landed on his hood. But ever earnest Barry shows up at Tim's door just after Julie walks out and soon Tim's fending off Darla (Lucy Punch, "Hot Fuzz"), a one night stand who's been stalking him, breaking into Kieran's to retrieve his car keys and getting audited by the IRS, all the results of Barry's 'help.' "Dinner for Schmucks" has lots of scenes which work individually, but the whole never gels well, especially when the titular climax is long awaited and then overblown. But when it works it can be quite funny. Kieran's gallery show, where we first meet Julie, is priceless, mostly due to Clement's ability to make an utter fool of himself as an entirely self-absorbed artist. I don't know if it was done in post, but a scene where Galifianakis turns beet red and back to pasty white in a matter of controlled seconds is a true original. Lucy Punch also lays herself out as the needy and sexually voracious Darla. On the other hand, it seems de riguer to include Kristen Schaal (HBO's "Flight of the Conchords") in comedy casts for a dash of cool these days, but she's merely OK, as is "Office Space's" Ron Livingston as Tim's business rival. "Little Britain's" David Walliams lends an otherworldly Teutonic vibe to Müeller, but Lucy Davenport's ("Alice in Wonderland") even better as his wife Birgit. The Schmucks dinner isn't as looney as it could have been, although character actress Octavia Spencer ("Coach Carter," "Drag Me to Hell") shines as a pet psychic channeling the last moments of their meal. The film hinges on Rudd and Carell of course and the two have an easy going give and take together. Rudd is the Everyman and gets in some amusing physical moves with a pulled back, but he's really the reactor, not the funnyman. Carell does a stoned version of "Nutty Professor" era Jerry Lewis with the fringe cut, glasses and protruding choppers. He's not particularly funny either, more a setup for circumstances which are. As the love interest, Stephanie Szostak is like a modern day Claudine Longet. Thankfully, "Dinner for Schmucks" repeats its taxidermied mice scenes on the way out as a means to provide happily-ever-after character updates. Roach may ramble with his actual film, but he sure knows how to enter and exit.

Comedy director Jay Roach takes the helm of this remake of Francis Veber’s French farce “Le Diner de Cons” and he and his filmmakers create a rarity – a remake of a French film that makes it American, and funny. The screen chemistry between long time comedic colleagues Steve Carrell and Paul Rudd is in top form as Tim, confronted with the title dinner, is torn between getting the promotion whatever the cost and his good conscience, making this an American morality fable. Barry (Steve Carrell) works for the IRA but his real passion is creating elaborate diorama using dead mice. The amateur taxidermist collects his tiny subjects from the streets, stuffs them, puts them in costume and recreates great moments in history. Meanwhile, Tim struggles with the idea of purposely humiliating people for the entertainment of others while the carrot of a coveted seventh floor office dangles in front of his face. Tim’s fiancée, Julie (Stephanie Szostak), is appalled at the idea of the elitist feast and effectively acts as his Greek Chorus of reason. Tim, by chance, runs into Barry and he takes a liking to the little man, who is without a clue but shows passion for his mouse art. He also sees Barry as his key to the kingdom upstairs. What transpires, and is the heart of “Dinner for Schmucks,” is a charming, often funny film about friendship and respect. Paul Rudd, by necessity, plays the straight man to Carrell’s (most likely improvised) lovable schmuck and there is a nice arc to their characters and their growing friendship. While the stars of “Dinner…” is the audiences draw, it is the supporting cast and there characters that flesh it out to a real ensemble comedy flick. Joining Tim and Barry is Therman (Zach Galifianakis) as Barry’s IRA superior who thinks he manipulates Barry through mind control. Therman is an obvious choice to take part as a “guest” for the dinner. Germaine Clement, as usual, is downright hilarious as artist (and Julie’s client) Kieran, an oversexed and self possessed star of the art world and a threat to Tim. David Walliams, from TV’s “Little Britain,” is amusingly droll as the Swiss arms manufacturer, Mueller. Lucy Punch is creepily fun as Darla, a woman who has been stalking Tim for years and, because of Barry’s good intentions, gets her foot, literally, in his door. Veteran actors Bruce Greenwood and Ron Livingston rep the snobbish elitists hosting the titular dinner. The techs reflect the film’s obvious large budget. Lensing, by Jim Dernault, is crisp and vibrant. Production design is imaginative and original. Everything clicks in front of and behind the camera, making “Schmucks” good summertime movie entertainment.