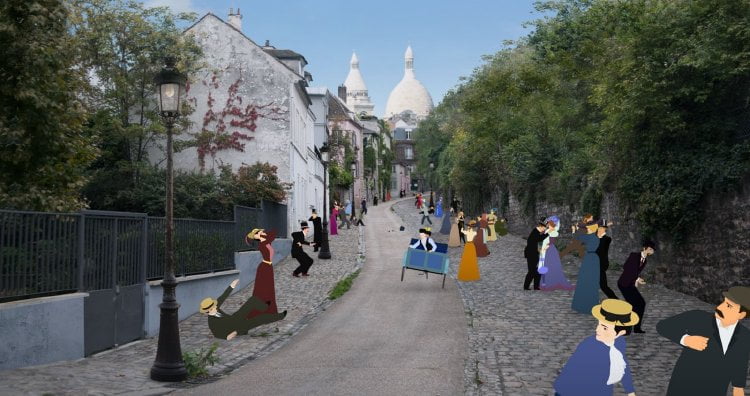 In Belle Époque Paris, girls are disappearing at an alarming rate. A young Kanak visitor from the French colony of New Caledonia joins forces with a tricycle messenger, Orel (Enzo Ratsito), to get to the bottom of the mystery, with a little help from some notable figures of the arts and sciences, in “Dilili in Paris.”

When courier Orel (voice of Enzo Ratsito) stops by a living tableau of the Southwest Pacific Kanak people at a Parisian exhibition, he asks a little girl there if she speaks his language. Turns out she certainly does and the two team up to figure out who is kidnapping young girls, meeting important figures of the Belle Epoque along the way in “Dilili in Paris.”

Writer/director Michel Ocelot creates a unique form of animation, using his own still photographs of Parisian landmarks and street scenes within which he places his brightly costumed characters. It’s absolutely astonishing to look at, a lovely visit to the City of Lights that quite literally glows. But “Dilili in Paris,” which was shown in 3D theatrically and won the Cesar for Best Animation in its home country, is only being released on VOD in the U.S. and in a dubbed English language version. Normally, this might not be an issue, but the voice actors are all so wooden, they sound like the result of a translation program. Admirably, Ocelot’s story has a strong feminist slant, but in every other aspect it doesn’t hold up to his visual imagination.

The writer Colette, for example, is used for some very heavy handed exposition and after Dilili admires a sculpture in Rodin’s workspace only to be introduced to Camille Claudel, her only line is ‘It is!,’ verifying that she is the artist. Dialogue is simply tin-eared. Music helps allay some of the aural awfulness, like when French opera star Emma Calvé (voice of operatic soprano Natalie Dessay) sings in a tunnel or when we hear Erik Satie’s ‘Gnossienne No.4,’ but listening to this film is generally grating.

Ah, but its sights. A visit to the Moulin Rouge with Toulouse-Lautrec features hypnotically swirling skirts and artists like Renoir, Degas, Monet, Matisse and Modigliani are featured, their work ingeniously incorporated into their scenes. Even without 3D, it is thrilling to watch Orel’s cart carrying Dilili careen chaotically down a hilly street full of pedestrians. But that feminist plot gets unduly creepy when we learn just what the kidnapping ‘Master Men,’ fearing the advancement of women like Marie Curie, are up to. Little Dilili is an engaging heroine who runs into more historical figures than Owen Wilson’s midnights in Paris. If only she was speaking her own language. It is difficult to critique when one has not seen the film in its original form, but the dubbed VOD version is, sadly, a very mixed bag indeed.

First off, let me praise “Dilili in Paris” for its outstanding CGI animation that captures perfectly, the City of Lights.” If you are looking for a travelogue film that gives the essence of the heart of that beautiful place, this gorgeously rendered animation fits that bill. Unfortunately, the story and its notably stilted English-language dialog fail the technical achievement in animation.

Young Dilili, a part of a cultural exposition in Paris, decides that she wants to view the people of the city herself. She sets off on her mission and learns of the mysterious disappearances. She is joined by Orel, whose messenger trike is perfect to convey them about town to seek out clues to the nebulous kidnappers, called the Mystery Men. (Who, by the way, are really, really bad people with really, really creepy intent.)

As the newly-dubbed sleuths crisscross the city in search of clues, they cross paths with such Belle Époque notables as Pablo Picasso, Louis Pasteur, Toulouse-Lautrec, Auguste Renoir, Modigliani, Sarah Bernhardt, Claude Debussy, Degas, Monet, Eiffel, Rodin, Marcel Proust, Jules Verne and Ravel, among others. This who’s who list of celebrities combined with the mystery story should carry the day for “Dilili” but the problematic vocal readings and wooden storytelling do not. It makes me wonder how I would feel if I saw “Dilili” in its original 3D and with subtitles.