Diary of a Mad Black Woman 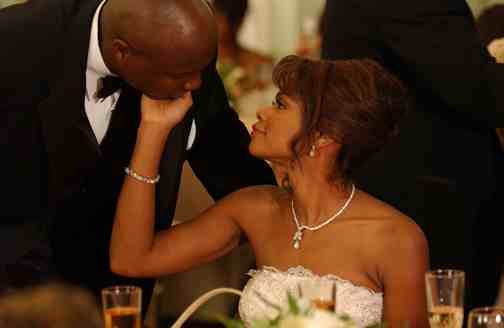 Helen McCarter (Kimberly Elise, "The Manchurian Candidate," "Woman Thou Art Loosed") is a wealthy Atlanta society woman cocooned in a happy nest with her attorney husband Charles (Steve Harris, "Bringing Down the House"), or so she thinks. On the eve of their eighteenth wedding anniversary, Helen finds out that she's being replaced and quick as a wink is living the "Diary of a Mad Black Woman."

Playwright Tyler Perry, whose palatial Atlanta manse stands in for the McCarter estate, is living proof that there's no accounting for taste. He's adapted his popular 2000 play, put it into the hands of Destiny's Child video director Darren Grant and given himself three roles. The end results is something like "Waiting to Exhale" crossed with "Nutty Professor II: The Klumps" and "Big Momma's House." "Diary of a Mad Black Woman" is one of those movies that's so jaw-droppingly ridiculous that it becomes entertaining. Helen is clearly deluded. Her husband runs cold in private and hot in public, and is caught in his office with a much younger white woman and racially mixed child that his assistants are trying to shield her from. Charles blows kisses from the podium accepting the Bob Feinstein attorney of the year award, then drops Helen off at home saying he has to return to the office. The next day, Helen is literally dragged kicking and screaming out of her home because Charles has decided to move in the mother of his children (Lisa Marcos, TV's "Kevin Hill," as Brenda). Charles has cut Helen off from her family over the years, but after driving around all night in the moving van her husband helpfully hired for her, Helen arrives at Madea's (Perry), who immediately begins plotting revenge and waving her pistol around. She's astonished to discover her old good friend Debrah (Tamara Taylor, "Introducing Dorothy Dandridge") is now a junkie. After raising some ruckus at Charles', Madea throws a party that enables Helen to reconnect with cousin Brian (Perry again), the attorney married to Debrah, who 'introduces' her to Orlando (Shemar Moore, TV's "The Young and the Restless"), the guy who Charles hired to clear her out of his home. Sparks eventually fly, but when Charles is shot by a drug lord and abandoned by Brenda, Helen, not yet divorced, rushes back to her old life. Perry, who must be commended for the humorous character of Madea (a contraction of 'mother dear'), in addition to playing Madea's brother Tom and their nephew Brian, has written a script that would make most soap operas look subtle. Charles is such a cold fish that it is impossible to envision a time when he was a good husband. Orlando, on the other hand, is a steel worker who labors twelve hours a day, has a taste for pricey jazz clubs and doesn't believe in sex before marriage! Grant lets Perry's script dictate a wildly uneven tone, allowing the film to careen from gushy romance to slapstick to Debrah's uplifting, stuck-on redemption subplot (which culminates in a Church scene that must be seen to be believed). Perry even caps his story with an ending straight out of "An Officer and a Gentleman" just for good measure. The screenwriter, who has played the character of Madea on stage (she's featured in a few of his plays), clearly has on screen talent. Despite annoying overuse of her pistol prop, even under house arrest, Madea is a fun, larger than life character. Brian, by contrast, is a good-looking, serious minded husband and father coping with his wife's drug addiction. Tom, the other character Perry plays under wig and makeup, is the comic sounding board for Madea who invites the comparison to Eddie Murphy's Klumps. Elise is as appealing as possible playing a character who cannot see the obvious through about eighty percent of the picture. Cicely Tyson ("Because of Winn-Dixie") has a small role as Helen's mother, not bitter after being prematurely put in a home to satisfy her son-in-law. She dispenses advice that's a little less drastic than Madea's. (It should be noted that Tyson seems at least two decades older than Madea, who would have been married to her father.) "Diary of a Mad Black Woman" is one of the kookiest melanges of romance, drama, comedy and spirituality that have ever been exposed to film. It's laughable, but oddly likeable.

Charles McCarter (Steve Harris) is a star in Atlanta’s legal community and his loyal wife, Helen (Kimberly Elise), has stuck by him through thick and thin for the 18 years of marriage. On the eve of their anniversary, he receives a prestigious award in recognition of his hard work. On what should be a magical night, he drops a bomb on Helen, telling her that their marriage has run its course and she must make way for “the other woman.”. Suddenly, she finds herself an outcast from her own home and doesn’t have a clue to why in “Diary of a Mad Black Woman.” Writer-director-costar Tyler Perry adapts his own play to the big screen in a hodge-podge of drama and slapstick comedy that, surprisingly, sometimes entertains and amuses. The main premise of “Diary of a Mad Black Woman” hinges on the fact that Helen never saw the fact that she was married to a royal jerk for 18-years. Charles physically hauls his wife out of their mansion to be replaced by trophy bimbo, Brenda (Lisa Marcos), a leggy younger woman who can give Charles the kids he claims Helen denied him. It is a moustache twirling, shallow bad guy performance that is far from believable but Harris makes Charles the kind of guy you love to hate. Star Elise gives a bewildered, angst ridden performance that turns to anger under the tutelage of her spunky, gun-toting grandma, Medea (Tyler Perry), who helps to instill backbone into her granddaughter to stand up for her rights and get what is rightly hers after a lifetime of sacrifice for Charles’s career. Out of context with the darkness of Helen’s plight, Tyler Perry provides copious comic relief as the outspoken Madea. Her antics take you away from Helen’s madness for revenge against Charles and the budding love story between her and the hunky guy, Orlando (Shemar Moore), who tried to help the shattered Helen the night she was thrown out of her home. Perry runs with the absurdity of his character and makes it an integral, often amusing part of “Diary of a Mad Black Woman. This kitchen sink film never finds its level but pushes enough of the appropriate buttons to help the screening audience I saw the film with to make it an interactive event – especially when Charles gets his. Diary of a Mad Black Woman” tries to do too many things and only succeeds in some of them. Some may question the combination of marital drama and madness with earthy slapstick humor but it, surprisingly, works – at times.