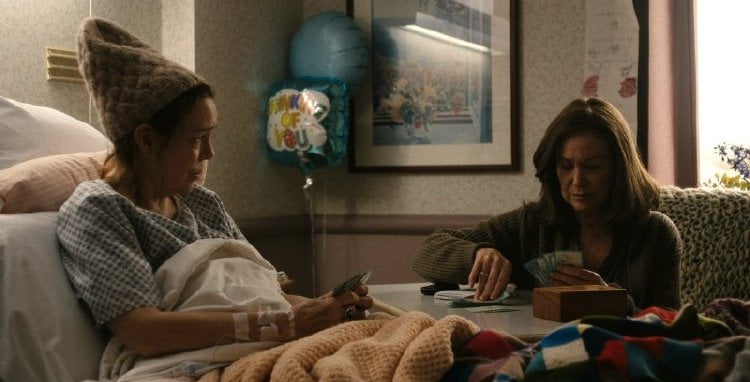 A woman wakes up in a chair in a hospital room where she’s been spending a lot of time with a cousin dying of cancer. She spends her days driving about the rural roads and highways of western Massachusetts delivering food to friends and the adult son, Brian (Jake Lacy), whose drug addiction is her constant worry. Her joy comes in spending time with family and her best friend Bobbie (Andrea Martin). Everything about her seems selfless, but there is ‘one terrible sin’ that haunts “Diane.”

What Alfonso Cuaron recently accomplished with “Roma,” transporting memories of his Mexican childhood onto the screen so acutely they felt like they were ours, has been given a New England spin in writer/director Kent Jones’ feature film debut. The New York based film critic and programmer has made documentaries (“Hitchcock/Truffaut”), but this film, based on his mother and aunts during his childhood, has been simmering for some time, written with star Mary Kay Place in mind. She’s phenomenal in a role that is the pinnacle of her career, but the things that make Jones’s film so special are its seep-into-your-bones sense of place and the outstanding ensemble that makes Diane’s extended family so true to life. Diane leaves the hospital in her brown Ford hatchback and pulls up in front of a brown asbestos shingled house. She removes a pile of neatly folded laundry from the back and goes in, recoiling from the sight of a young woman sleeping in a bedroom, the door ajar. This is not her home but Brian’s and she finds him curled up on a couch. The first impression of his knit cap, darkly shadowed eyes and the apartment’s general dishevelment is confirmed by his annoyed and manic behavior. Mother and son engage in a well rehearsed script, Brian insisting he is sick, Diane knowing better but afraid to push her agenda too strongly. The bleary Clara emerges, introducing herself to Diane for the umpteenth time. Even most of Diane’s beloved circle of cousins and aunts are tired of hearing about Brian and his pattern of recovery and relapse, polite inquiries quickly acknowledged. But Bobbie so empathizes with the stress she sees in her friend, she somehow absorbs some of it along with the tired, snappy behavior Diane only unleashes with her. Yet that warm circle of family found in cousin Dottie’s (Glynnis O’Connor) crowded, smoky kitchen envelops Diane, two older generations reminiscing as children dart in and out. Then, seemingly out of the blue, Donna (Deirdre O’Connell) issues a pointed barb during a hospital card game and an old wound festers anew. Diane’s resolve finally gives way to solo margaritas and a jukebox, Donna’s perpetually cheerful mother Mary (Estelle Parsons) and her sister Madge (Joyce Van Patten) responding to the call of a bartender with nonjudgmental care. The film is steeped in relatable detail. Diane visits the Rymanowskis to see how Al (Ray Iannicelli) is recuperating, food presented in a long borrowed casserole dish of Carol’s (Marcia Haufrecht) while she gets one she’d forgotten. A much awaited call from Brian arrives at the worst possible time, his admission of ‘feeling raw’ cruelly ironic. It is Tom (Charles Weldon), a soup kitchen regular with ties to Diane’s past, who recognizes and responds to her exhaustion. Funerals begin to pile up with alarming regularity. An odd dream may or may not be based in fact, but is true in its psychology, Diane’s past happiness a guilty burden. Mary Kay Place rarely changes expression, her frown a constant when alone, yet she’s created a complex character, one whose harsh self assessment fuels outsized love of those around her. Martin is a marvel, her eyes exuding comfort and understanding. Lacy, too, is strong here, trading the crutch of addiction for a religious zealotry that introduces new conflict only to temper himself in an alarming balance of self realization. O’Connell, Parsons and Phyllis Somerville as the family’s still beautiful chain smoking emphysemic matriarch all feel like people we’ve known. Kingston, Saugerties and Palenville, New York ably stand in for Massachusetts’ Pittsfield and Belchertown. When Diane pulls over on the side of a rural road and walks into snowy woods, the score features a single piano, the occasional wrong key hit by its player making the music all the more perfect and profound. “Diane” is beautiful and melancholic and moving, a movie to cherish. Grade: