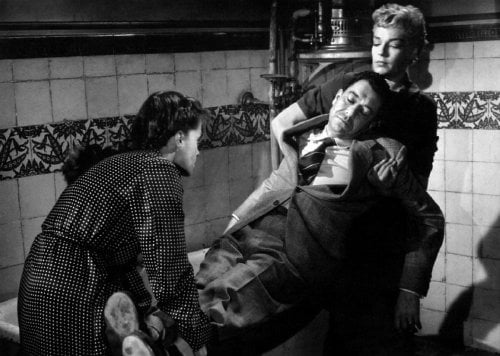 Christina (Vera Clouzot, "The Wages of Fear") is the beautiful and wealthy wife of Michel Delassalle (Paul Meurisse, "Army of Shadows"), who runs the boys' boarding school she funds with no regard for anything but profit. He's cruel and it is common knowledge he's having an affair with another teacher, Nicole Horner (Simone Signoret, "A Room at the Top"). When Nicole appears one day with a black eye, she takes Christina aside and suggest they murder her husband during the school's Christmas holiday in "Diabolique."

Cowriter (with Jérôme Géronimi)/director Henri-Georges Clouzot, adapting the novel (Thomas Narcejac's "Celle qui n'était plus") Hitchcock had wanted, comes up with the best of his twist endings in yet another of his tales where a love triangle circles a crime. This one also features the detective (Charles Vanel, "The Wages of Fear") many think inspired 'Columbo,' although his characteristics appear in earlier films like "Quai des Orfevres"." Christina, we learn early on, suffers from a heart condition. While there's no love lost for her husband any longer, her religious beliefs deny divorce. But when Nicole leaves early in the morning for her home town some hours' drive away, there's Christina. Nicole's plot involves an expensive bottle of whisky spiked with sedatives, a full bathtub, a plastic tablecloth and wicker basket. She's also got tenants, M. and MMe. Herboux (Noël Roquevert and Thérèse Dorny), to provide an alibi and, in typical Clouzot fashion, black humor. Nicole dials Saint Cloud and hands the phone to her betrayed patroness to announce her intention to divorce - bingo, the bait is snatched and Michel arrives after dark. But is Nicole really concerned about Christina's best interests? Why should this fragile bird of a woman (her pigtailed braids, joined together by a ribbon, add a childlike quality) be tasked with helping to carry a corpse or sent to fetch a bronze ornament to weigh it down? Christina's condition worsens, her fearfulness intensifies. Back at the school, when no one finds Michel in the pool as the women had planned, Plantiveau's (Jean Brochard, "Le Corbeau") tasked with draining it. There is no body. Then Michel's distinctive suit is delivered from the cleaners. When Christina sees an article about a man's body dragged from the Seine, she makes posthaste to the Paris morgue. Saint Cloud's school is like a post-war spin on a Dickinsonian institution where boys are fed rotting fish and made to stand in the corner, but there's also that classically French anarchic spirit among these students. One of them, Moinet (Yves-Marie Maurin), is observant about the goings on around him. And so as other professors note Nicole's dark sunglasses and the school's maintenance man controls comings and goings, no one thinks to listen to the kid, even after a class photo lends him credence. Clouzot's noirish images can still be traced to his German expressionistic influences with shadows, ghoulish faces and white nightgowns and his watery murder trickles liquidly throughout his film. Clouzot's dark delicate wife is beautifully contrasted against the earthy blond Signoret and while their relationship is curious to outsiders they seem comfortable in each other's company. Vera went on to star in her third film, again directed by her husband, "Les Espions," again as a fragile woman committed in an asylum. Ironically given her heart condition here, Vera died of heart failure just five years after the release of "Diabolique." The film was remade, dreadfully, in 1996 with Isabel Adjani in the Clouzot role and Sharon Stone as Nicole.

Writer-director Jacque Audiard’s tale of a refugee family trying to survive in a strange and foreign land is timed perfectly in a world where the refugee plight in Europe has become the norm in our minds. “Dheepan” begins with the titular character and his men building a funeral pyre for their dead at the end of a lost battle. He has given up on the rebellion and, in a refugee camp, he is given a new identity. Unfortunately, he has to assume the role as husband and father to Yalili and 9-year old Illayaal. Their arrival in France is under less than auspicious conditions. The “family” moves from one temporary shelter to another and Dheepan is forced to sell cheap novelty items on the street to make ends meet. Things change for the better, they hope, when he gets a job as caretaker of a rundown apartment block in a Parisian suburb but the adjacent apartment building is a hotbed of drug dealing and violence. Yalili, frightened and reclusive in her new home, simply wants to leave and go to London where a cousin lives. Dheepan pressures her into getting a job and arranges for her to cook and clean for an elderly man in the bad apartment block. Her journey up the nine flights of stairs, the first time, is a terrifying blur of danger, especially when confronted by a very large white dog. (As time goes by, the things that terrify Yalili, like the big dog, become the norm for her.) Little Illayaal has her own issues to deal with, like going to school and making friends. The shy, lonely girl has problems with the latter as she is ostracized by the other kids. But, the little family seems to have found a relatively normal life in their home. That is, until a drug war begins and the apartment block becomes a war zone, with Yalili and Ilayaal caught in the crossfire. This sparks Dheepan to take matters into his own hands and he declares to those all around that his building is a No Fire Zone. Dheepan’s act of defiance begins the real meat of the story as the entire tone and direction shifts radically. I will leave it at that as the story of survival of a “family” in a strange, new world should be experience fresh. “Dheepan” is a solid trio of character studies with each member of the family, over the first half, fleshing out their well-drawn characters effectively. When the shift in story changes radically, their true selves come to the surface in the climax. Surprisingly, the actors have little to no experience and I would be hard pressed to find fault in any of the gripping performances.