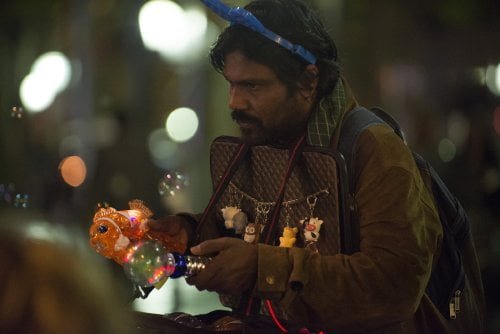 Dheepan (Jesuthsan Antonythasan) was once a Tamil Tiger, a freedom fighter against the corrupt Sri Lankan government. His side lost the rebellion and he is forced to seek asylum in France. He must assume a new identity and take his “wife,” Yalini (Kalieaswari Srinivasan) and “daughter,” Illayaal (Claudine Vinasithamby) and journey to their newly adoptive country in “Dheepan.”

In a refuge camp, a woman, Yalini (Kalieaswari Srinivasan), scrambles about looking for a child. When Illayaal (Claudine Vinasithamby) is identified as an orphan, she takes her by the hand to a tent where they are matched to the passports of a deceased family along with former Liberation Tiger "Dheepan." 2015's Cannes Palme d’Or winner from cowriter (with Thomas Bidegain, "A Prophet" and Noé Debré)/director Jacques Audiard ("Read My Lips," "A Prophet") is certainly timely, its story of immigrants running from horrors into the unknown deeply moving. It's a very human story of three strangers, each of whom handles their new situation differently. The trio is sent to France where Dheepan initially tries to raise money by selling cheap novelties to cafe goers. The situation is humiliating, the man wearing an LED headband in competition with too many, all of them ignored. But he secures a job as the maintenance man for a building block from Youssouf (Marc Zinga, "Spectre") who instructs him to work on four blocks in the mornings, leaving the four across the courtyard to the drug traffickers who have overrun them. Dheepan is happy to embrace his new 'family' and Illayaal comes to him for comfort, but Yalini bucks against it, yearning to join a cousin in London. Dheepan, who would gladly legitimize their sham marriage, is appalled she'd consider leaving Illayaal and suggests she get a job. Youssouf comes through, getting her a position caring for Monsieur Habib (Faouzi Bensaïdi), whose apartment houses a nest of shifty characters. But one of them, Brahim (Vincent Rottiers, "Renoir," "Mood Indigo"), shows considerate appreciation. Yalini responds by making herself a silky coral blouse. When Yalini and Illayaal are caught amidst gang gunfire in their courtyard, Dheepan fights back, drawing a literal line in the sand, a 'no fire zone,' but Yalini attempts to flee. Illayaal, who's been trying to assimilate at a local school, begins to act out. Audiard shifts tone throughout, desperation turning towards hope, a moment of eroticism fading to rejection, eventually building to a violent climax with echoes of "Taxi Driver" before the dust settles in happy calm, dreams fulfilled. The face of an elephant graces the screen in a couple of dreamlike passages, Lord Ganesha watching over these three. Jesuthasan Antonythasan, a real former member of Sri Lanka's Liberation Tigers who escaped to Thailand in the 80's, later settling in France, is a commanding presence as Dheepan. You want things to go right for this noble, compassionate, hard-working man who constantly faces obstacles and violence. Srinivasan provides the pivot which keeps the outcome in suspense while Vinasithamby is the face of innocence evoking Dheepan's paternalism. Also very good is Rottiers, the charming snake in their midst. "Dheepan" puts a personal face on those displaced by repressive regimes. Once you've seen it, you may never view an immigrant selling wares on the street the same way again. Grade:

Writer-director Jacque Audiard’s tale of a refugee family trying to survive in a strange and foreign land is timed perfectly in a world where the refugee plight in Europe has become the norm in our minds. “Dheepan” begins with the titular character and his men building a funeral pyre for their dead at the end of a lost battle. He has given up on the rebellion and, in a refugee camp, he is given a new identity. Unfortunately, he has to assume the role as husband and father to Yalili and 9-year old Illayaal. Their arrival in France is under less than auspicious conditions. The “family” moves from one temporary shelter to another and Dheepan is forced to sell cheap novelty items on the street to make ends meet. Things change for the better, they hope, when he gets a job as caretaker of a rundown apartment block in a Parisian suburb but the adjacent apartment building is a hotbed of drug dealing and violence. Yalili, frightened and reclusive in her new home, simply wants to leave and go to London where a cousin lives. Dheepan pressures her into getting a job and arranges for her to cook and clean for an elderly man in the bad apartment block. Her journey up the nine flights of stairs, the first time, is a terrifying blur of danger, especially when confronted by a very large white dog. (As time goes by, the things that terrify Yalili, like the big dog, become the norm for her.) Little Illayaal has her own issues to deal with, like going to school and making friends. The shy, lonely girl has problems with the latter as she is ostracized by the other kids. But, the little family seems to have found a relatively normal life in their home. That is, until a drug war begins and the apartment block becomes a war zone, with Yalili and Ilayaal caught in the crossfire. This sparks Dheepan to take matters into his own hands and he declares to those all around that his building is a No Fire Zone. Dheepan’s act of defiance begins the real meat of the story as the entire tone and direction shifts radically. I will leave it at that as the story of survival of a “family” in a strange, new world should be experience fresh. “Dheepan” is a solid trio of character studies with each member of the family, over the first half, fleshing out their well-drawn characters effectively. When the shift in story changes radically, their true selves come to the surface in the climax. Surprisingly, the actors have little to no experience and I would be hard pressed to find fault in any of the gripping performances.