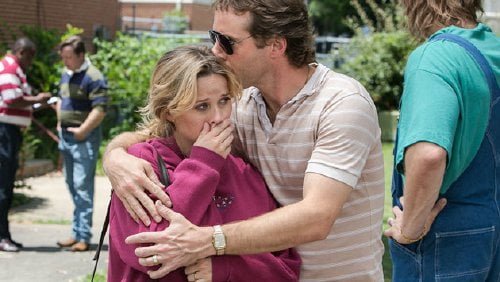 On May 5, 1993, Pam Hobbs (Reese Witherspoon, "Mud") told her eight year-old son Stevie Branch (Jet Jurgensmeyer) that he could go bike riding as long as he was home by 4:30. He never returned. The next day the city of West Memphis, Arkansas was in an uproar when he and two friends were discovered hog tied in a creek in Robin Hood Hills. Satanic panic pointed its finger at three teenagers and the community found itself tied into a "Devil's Knot."

Director Atom Egoyan has been on a middling to worse streak ever since his best film, 1997's "The Sweet Hereafter," but at least those films have had the stamp of an auteur. With "Devil's Knot," had I not known going in who made it, I would have been surprised that this unnecessary film, featuring a good performance from Reese Witherspoon but little else (unless reality show level reenactments are your bag), was his work. Adapted by "The Exorcism of Emily Rose's" Paul Harris Boardman & Scott Derrickson from Mara Leveritt's 2002 book, the film's production caused a rift between the West Memphis Three's Jason Baldwin (an executive producer) and Damien Echols, who objected to its sensationalistic tone, his portrayal as a blood drinking occultist and the focus on investigator Ron Lax, whom Echols deemed a 'minor character.' Echols should rethink his objections, maybe pointing instead to dubious casting (and, often, acting), compression of events and the open-mindedness ascribed to Pam Hobbs at the time of his trial. One must also wonder why anyone would make a movie from a book over a decade old when so much has come to light in the ensuing years. The film begins dubiously, contrasting the lifestyles of private investigator Ron Lax (Colin Firth, "The Railway Man," whose accent here is undeterminable) and Pam Hobbs. As he bids $2,000 on an antique desk, she makes lunch for her smiling son in a sunny kitchen as if life couldn't be more perfect in the blue collar home. Egoyan caps the latter with the film's highlight - a view from Pam's window in which Stevie and his friend Michael Moore bicycle off and are swallowed by the landscape. Anyone familiar with the case will find a number of things in "Devil's Knot" odd - some facts, which have almost become footnotes (a bloody, disoriented man at a nearby Bojangles restaurant has largely been dismissed as a suspect, although the handling of that evidence highlights the ineptitude of the police investigation), are stressed while others are disregarded. Oddly the confession of Jessie Misskelley (Kristopher Higgins, "In Time") is only gradually revealed to have been coached by his questioners. James Hamrick has none of the cocky charisma that made Echols a media sensation (although to give the actor his due, his reaction to his sentencing is a deft piece of work). Pam's husand Terry (Alessandro Nivola, "American Hustle"), a man prone to violence now considered by many to be the lead suspect, is portrayed largely as a quiet, supportive husband, while she is shown as obviously troubled by evidence during the WM3 trial (Hobbs can be seen decrying the boys in the "Paradise Lost" documentary series, although she has since come around to support them). One could make a case for dramatic license, but the film's only real drama is in a mother's grief.