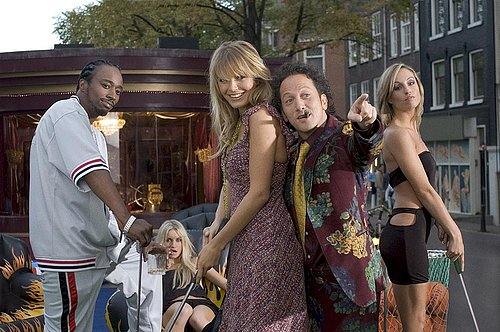 Someone is killing the great man-whores of Europe and male pimp T.J. Hicks (Eddie Griffin) is a prime suspect. He contacts his former number one gigolo (Rob Schneider) to come to Amsterdam, go undercover and clear his friend’s not-so-good name in “Deuce Bigelow: European Gigolo.”

Deuce Bigelow (Rob Schneider, "The Longest Yard" remake) is getting over the loss of his one-legged wife Kate to a shark on their honeymoon botching further ichthyology experiments. Just as he's making Malibu news over his latest screw-up, T.J. Hicks (Eddie Griffin, "Undercover Brother") calls from Amsterdam, offering him a revived career as "Deuce Bigelow: European Gigolo." After the surprise success of 1999's "Deuce Bigelow: Male Gigolo," comes this long unawaited sequel. Schneider and "Corky Romano" screenwriters David Garrett and Jason Ward start with a 'someone is killing the great gigolos of Europe' outline and hang all matter of rancid scatological jokes on it. Canadian tourists defecating on Amsterdam's streets? Check. Eating French fries from the toilet? Check. Midget tossing? Check. A homophobic T.J. continually caught with his hand down a man's pants? Check. A woman born post-Chernobyl with a man's genitalia for a nose? Check. And she sneezes. In a restaurant. Many times. There are very few genuine laughs to be had here, unless, perhaps, you're a boy under the age of thirteen (and this film is R-rated). Deuce subjects himself to a giantess (Skytriss) with a baby fixation, a woman covered in sewerage, a woman with Dumbo ears, a woman with a tracheotomy hole in her throat (who also goes to a restaurant, and, of course, smokes), and the aforementioned Svetlana (Miranda Raison, Woody Allen's upcoming "Match Point"). The disfigured women are brought to a plastic surgeon where they emerge with - larger breasts! Deuce goes to a coffee shop and eats space cake, then attacks T.J. thinking he's a Dutch girl! The Amsterdam location lends itself to multiple pot references, as well as riffs on sexual openness (stripteasing weather reports, the 'Man Whore Society' itself), but why the pointed gibes at American politics turn into bashing neutral Canadians is a mystery. Jumping off from Andy Dick's definition of a 'Rusty Sanchez' in "The Aristocrats," the man-whores also treat us to the Filthy Lopez, Sneaky Castro, Cambodian Creamsicle, Portuguese Breakfast, Turkish Snocone and Chili Rainbow in perhaps the film's only semi-decent running gag. What is most surprising is that European stars Jeroen Krabbé ("Ocean's Twelve") and Til Schweiger ("King Arthur") agreed to be in this, the former as the immediately transparent Detective Gaspar, the latter as legendary man-whore Heinz Hummer. The original's Oded Fehr ("The Mummy") makes an appearance as does an uncredited Norm Macdonald milking a twisted Scottish accent as a Highland 'prostidude.' In her American film debut, the fresh-faced Hanna Verboom is this "Bigelow's" heroine/love interest Eva, a woman with 130 obsessive compulsive disorders that range from being unable to touch a doorknob to smacking herself three times whenever someone sneezes. Even technically, "Deuce Bigelow" isn't up to snuff, with poor sound in the opening reel. There's a mood and a market for really low and dumb humor, but "Deuce Bigelow: European Gigolo" doesn't even seem to be aiming that high. It's a bad trip from start to finish.

I wonder who thought that a sequel to the goofily amusing comedy, “Deuce Bigelow: Male Gigolo” was something that just had to be done. Whoever it was must have thought it a good omen when first time helmer Mike Bigelow was hired to direct the follow up to the successful 2001 film. They should find this person and issue a restraining order to make sure he or she is never allowed within 100 miles of any studio – and be neutered to prevent future generations of having such genes of bad taste and poor judgment. I’m not usually a fan of most sequels and can’t see why they are made in nearly all cases, except to earn the almighty buck. This, I believe, is the reason for Deuce Bigelow: European Gigolo” – to make money without giving a care to whether its funny or not. The only thing going for it, as far as I can see, is the use of one of my favorite cities, Amsterdam. Other than that, I should have known better and stayed home instead of wasting a couple of hours of my finite life. What can you say about “DB: EG”? More of the same as the first, this time with the Deuce man on the case to use his god-given gigolo abilities to uncover who is killing the great man-whores on the Continent. Things start out with some amusement as a handsome gigolo is paid off by his beautiful client, with thanks and money, as her husband returns home. The love machine runs into the maid who also slips him money and thanks him for a wonderful night. Then, a security guard stops him and, surprise, does the same thing. OK, not a bad start, but then things rapidly deteriorate. Deuce heads to The Netherlands to help clear T.J. of murdering a mounting number of man-whores. He uses his skills to find clues and ply the trade he thought he gave up. He first meets a beautiful young woman, Eva (Hanna Verboom), who appears normal but suffers from obsessive-compulsive disorder – 130 of them – and falls for her. Then he beds a number of challenged clients: a giantess who wants a baby (Deuce in baby bonnet and diapers); Greta, the hunchback girl (Dana Goodman); Louisa, the dirty girl (Rachel Stevens); the big-eared girl (Julie Wolov): and, Svetlana, a young woman born in Chernobyl right after the reactor accident, whose nose is a male appendage (thankfully kept covered by a veil). This collection of clients make those from the original “Deuce Bigelow” seem normal. Some chuckles are gleaned from the members of The European Society of Man-Whores who discuss their particular favorite sex techniques with such names as the Portuguese Breakfast and the Cambodian Creamsicle. But, the humor pretty much stops here. Most of the gags tend toward things like T.J. eating fries from a toilet, Canadians crapping on the streets of Amsterdam and T.J.’s low-rider houseboat called “Pimp of da Sea.” Yeah, that’s about it. While I’m not surprised that Rob Schneider or Eddie Griffin made the choice to reprise their roles from the first “DB” – Schneider plays the less-than-everyman character with ease and Griffin goofs on his return as T.J. – I am shocked that such notable European actors as Jeroen Krabbe and Til Schweiger (playing gigolo Heinz Hummer, get it?) would lower themselves to such depths. I hope their payday was a good one because neither did their careers any good with this embarrassment of a comedy. The producers of “Deuce Bigelow: European Gigolo” likely hired newcomer Mike Bigelow so they could blame him if the film flops. But, while it probably won’t have the success of the first, I’m guessing that its appeal to the absolute lowest common denominator will make it a success for the opening weekend. Too bad. This turkey should be slow roasted and chucked out the window.