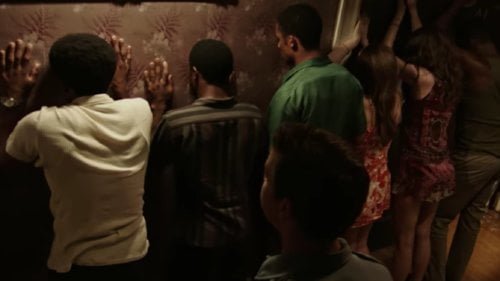 In 1967, Detroit was rocked with mass arrests by police that resulted in the 12th Street Riot, turning the city into a maelstrom of destruction. About a mile from the riots, the inhabitants of the Algiers Motel weather the storm in relative quiet. Then, as a joke, one of the revelers fires a harmless starter pistol out the window. Police and National Guard soldiers invade the motel to ferret out reported snipers. This will devolve into abuse, torture and murder in “Detroit.”

In the early morning hours of July 23rd, 1967, white police raided a blind pig (an after hours, unlicensed bar) where black citizens had gathered to welcome home Vietnam War vets. As they threw people into paddy wagons, they were confronted by locals on the street. Rioting broke out that would last for five days. Governor George W. Romney, denouncing lawlessness and houliganism, ordered in the National Guard. Eighteen year-old Larry Reed (Algee Smith, "Earth to Echo"), whose Motown group the Dramatics had their first appearance scuttled when the Fox Theater was evacuated, headed for safety at the Algiers Motel with his friend Fred Temple (Jacob Latimore, "Collateral Beauty"). They chatted up to two white girls, which was all that was needed to condemn them in the eyes of racist cops looking for a sniper in "Detroit." Anyone who doesn't understand the Black Lives Matter movement would be well advised to take in Kathryn Bigelow's ("Near Dark," "Zero Dark Thirty") terrifyingly immersive account of the Detroit riots. Screenwriter Mark Boal ("The Hurt Locker," "Zero Dark Thirty"), who interviewed Cleveland Larry Reed and other eyewitnesses, utilizes the three act structure, outlining how the riots began then zeroing into the Algiers Motel incident before wrapping with a courtroom drama and its sorrowful aftermath. He also primarily uses three points of view - that of sociopathic racist cop Krauss (Will Poulter, "We're the Millers," "The Revenant"), black security guard Melvin Dismukes (John Boyega, "Star Wars: The Force Awakens"), and Larry Reed. The English Poulter, who leapt from his child role in "Son of Rambow" to demonstrate both comedic and dramatic ability in adulthood, chills the blood as the face of American racism with the power of a badge. The film's opening credits animate an oil painting with camera movement as we're given America's black and white history of migration, the movement resulting in white suburbia with blacks restricted to crowded urban neighborhoods policed mostly by white cops. The dramatized 12th Street incident is interwoven with archival footage, before cutting to three cops, Poulter's Krauss, Flynn (Ben O'Toole, "Hacksaw Ridge") and the naive Demens (Jack Reynor, "Free Fire"), driving about the city. It's not immediately clear they are Detroit police, until Krauss decides to go after a man running with two bags of groceries. Unable to catch him, Krauss shoots him in the back (Joseph Chandler was one of 24 blacks killed by police or National Guardsmen). Back at the station, Detective Tanchuck reads Krauss the riot act, telling him he'll be recommending murder charges, but he's allowed back on active duty. Dismukes has just gotten home from his day job when he's called in to guard a store overnight. Melvin straddles the racial line, a clear champion of law and order, so when he sees a National Guard tank roll in across the street, he makes a peace offering of coffee to ally with the troops, chatting with Warrant Officer Roberts (Austin Hébert, "Jack Reacher: Never Go Back"). The two will both show up at the Algiers, where Larry is nudging Fred towards Julie (Hannah Murray, HBO's 'Game of Thrones') and Karen (Kaitlyn Dever, "Short Term 12"), two white Ohio teens dipping their toes into the Summer of Love. The girls invite the Dramatics for a bite to eat in another room where they find Carl (Jason Mitchell, "Straight Outta Compton") cooking up hot dogs. Carl's been drinking and goofing around pulls a gun on his buddy Aubrey (Nathan Davis Jr.) and shoots, horrifying the room. It's quickly revealed as an ill-advised prank, his gun a small starter pistol. The group has barely collected itself when real bullets hail through the windows. Cinematographer Barry Ackroyd ("The Hurt Locker," "Captain Phillips") achieves a 16mm look and a handheld intensity for what follows, a real life descent into hell. Carl's shot as cops storm the motel's annex, a switchblade placed beside his body. We witness his anguished face as he takes his last breaths. Larry, Fred, Julie, Karen and Robert Greene (Anthony Mackie, "Captain America: Civil War"), another Vietnam vet who had the girls in his room, are lined up in a hallway, their hands against the wall, as Krauss begins a very sick game to out the sniper. Two of them won't live to tell their tale. Smith's character has the largest arc, forever changed by his experience. Latimore scores with a moment of incredible truth while Mackie's reasonable calm is its own rebuke. Perhaps one of the most horrific occurrences of the second act is seeing a shaken State cop report to his superior that what's he just seen inside is seriously wrong. The superior responds that he doesn't want to get involved in any 'civil rights thing,' ordering his men out of the scene. The third act begins with Dismukes hauled in for questioning, the cooperative witness slowly realizing what's about to happen to him. The trial will be all too familiar ('The Office's' John Krasinksi plays surprisingly and effectively against type as defense Attorney Auerbach while "The Big Short's" Jeremy Strong offers sober gravitas as prosecuting Attorney Long). Bigelow's harrowing film derives its power by plunging us into a nightmare of racial injustice, chaos and intimidation right alongside the Algiers victims. One comes away with the sobering reflection that the United States seems incapable of learning from its mistakes. Grade: