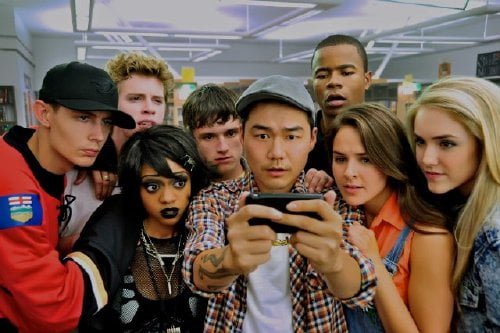 With a serial killer hunting the students of Grizzly Lake High, a group of kids bands together to keep Cinderhella at bay during "Detention."

Perhaps trying to coattail on the hotness of "Hunger Games," Samuel Goldwyn Pictures is releasing this Josh Hutcherson producer/star vehicle now after its debut at last year's SXSW fest, but it's likely to be crushed by hotter (and far more deserving) competition from "The Cabin in the Woods," with which it shares meta-horror themes. About the only audiences who might appreciate "Detention" are those with extremely short attention spans or trivia buffs looking for obscure film references and musical cues from the past twenty years. "Detention" shares the stylings of "Scott Pilgrim vs. the World" with its mid-air graphics, snarky dialogue and cartoonish action as if injected with an overdose of speed. In the film's prologue, Grizzly Lake High's most popular girl, cheerleader Taylor Fisher (Alison Woods), tells us she's a bitch and proceeds to act like one (even the musicians in her bedroom rock star poster complain) as she relates than anyone who is anyone will be at the opening of "Cinderhella II," the sequel to a popular slasher movie. She's then attacked by what appears to be that film's killer as her put upon mom waits for her in the car outside. Cut to Grizzly Lake High's second biggest loser, Riley Jones (Shanley Caswell), a girl far too pretty to bear that moniker, but one who lives in a more modest house and neighborhood and who sports a broken leg in a cast. Riley has long pined for her best friend since childhood, the school's most popular guy Clapton Davis (Josh Hutcherson, "The Hunger Games"), but he's only got eyes for her former bestie, perky cheerleader Ione (Spencer Locke, "Resident Evil: Afterlife"). Riley's asked to prom by Sander Sanderson (Aaron David Johnson) and recoils, but later she's humiliated even more when Clapton sees her, in her Grizzly High Football mascot costume, in what appears to be a compromising position with player Billy Nolan (Parker Bagley), who's actually glued to her bear fur because he's some kind of Spider-Man/X-Men mutant. And that's one of the major problems with this film - it includes everything but the kitchen sink (another primary character is revealed to actually be her mother, body-swapped "Freaky Friday" style), thrown at you with a dizzying pace the director seems to think is the equivalent of comedy. Suicides, murders, a time travel machine(!), movies within movies within realities, lots of vomit, funny amputations and a partridge in a pear tree. 1992 is a significant date in the film, but just who is expected to pick up on a reference to the 1987 film "Three O'Clock High?" This horror comedy spin on "The Breakfast Club" and "Scream" also features comedian Dane Cook as Principal Verge, the only recognizable cast member other than Hutcherson (who doesn't make much of a mark here). Caswell is the picture's heroine and she's likable enough that she just might break out. The film's soundtrack features everything from Hole and Hanson to 50 Cent and The Ravonettes. Some of the film's ideas are good, but cowriter (with Mark Palermo)/director Joseph Kahn (Brittany Spears' 'Toxic' video) directs his movie like a ADD kid with a hammer and a xylophone. "Detention" just wears you out.