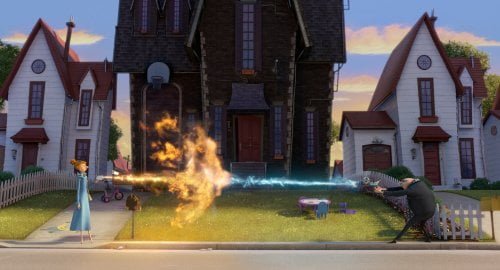 Having left super-villainy behind to parent his three adopted daughters, Gru (voice of Steve Carell), Dr. Nefario (voice of Russell Brand) and the minions have been unsuccessfully experimenting with making fruit jelly. But a new mission is right around the corner when a secret, evil-fighting organization led by Silas Ramsbottom (voice of Steve Coogan) kidnaps Gru to recruit the former mastermind. Gru is paired professionally with the NVL's Lucy Wilde (voice of Kristen Wiig) to find out just who is producing PX41, a concoction which turns its recipients into mindless killing machines, but a pairing of a different sort may be in the cards in "Despicable Me 2."

Returning screenwriters Ken Daurio and Cinco Paul mix family and villainy once again, hitting many of the same beats as the first time around (enormous weaponry, a theme-parky mall instead of amusement park, a capping song and dance performance and a Great White shark!), but while Gru finding a mate isn't as momentous as him having found his heart there's still plenty of fun to be had (some of it quite subversive!). Once again we begin with a villainous deed as an Arctic scientific station is sucked into the heavens by a giant magnet. But Gru's too busy planning Agnes's birthday party to notice. Until, that is, he's kidnapped (in a thrilling Bondesque maneuver involving inadvertent parasailing) and introduced to the Anti Villain League. He and Lucy are assigned cover as cupcake shop owners in the mall where men's hair replacement entrepreneur Floyd Eagle-san (voice of Ken Jeong) becomes a suspect. But Gru is convinced that Salsa & Salsa restaurant owner Eduardo Perez (voice of Benjamin Bratt) is really super villain El Macho, perhaps because Perez's son Antonio (voice of Moises Arias) has taken an interest in Gru's eldest, Margo (voice of Miranda Cosgrove). If the sequel doesn't quite measure up to the original, it's because of a lack of focus. There's a neighbor trying to fix Gru up (with Kristen Schaal's Shannon), Nefario's defection and that overly busy mall all competing with the main plots. Even the girls almost get lost in the shuffle. But the minions (inventively voiced by directors Pierre Coffin and Chris Renaud as if Cousin Itt was almost intelligible) get much more to do and arguably are the stars here. At first, they disappear from Gru's in ones and twos until an ice cream truck appears and sucks up a bunch of them. They're oblivious to any danger, held on an island paradise (where one bares its butt), but they have PK41 in their future. The craziest thing about this outing is its hermaphroditic humor. Tucking the girls in, Gru panics when he finds Margo texting an Avery, wanting to know if Avery's a boy. 'I know what makes *you* a boy' says little Agnes and Gru is startled. The answer's innocent, 'Your bald head.' She then proceeds to explain that it reminds her of an egg and she expects to see a chick hatch out of it. Later, minion Kevin, decked out in a coconut bra goes rubber tubing with a banana placed rather pointedly. Just what's going on here?! Once again Carell makes for a potent Gru but perhaps in an attempt to not overshadow him, the filmmakers once again fail to give him an interesting foe. Wiig's a bit bland, but the animators have captured her body language so well with Lucy you can almost see the actress herself. "Despicable Me 2," with its cross dressing minions and 'Y.M.C.A.' closer is cheeky family entertainment. Closing credits are accompanied by Minion Movie auditions, perhaps signalling where this franchise is heading. As a minion-POV camera sequence is one of this movie's highlights, it sounds like a good idea.

It has been four years since the evil genius, Gru (Steve Carrell), took the moon hostage and fell to the charms of orphans Margo (Miranda Cosgrove), Edith (Dana Gaier) and Agnes (Elsie Kate Fisher). He has turned his life around and is a good guy, now, not a bad guy. When he suspects that the owner of Salsa & Salsa restaurant, Eduardo (Benjamin Bratt), is his old nemesis El Macho, Gru must stop this villain from controlling the world in “Despicable Me 2.” I have anticipated the follow up to “Despicable Me” for quite a while. I loved that film and all of its wonderful characters as Gru changed from evil-doer to loving dad. Now, he is the consummate family man raising his three girls. Not everybody is happy with Gru’s new, reformed life, though, and Dr. Nefario (Russell Brand) informs his boss that he can no longer take being a good guy and leaves. Meanwhile, there is trouble brewing when an entire Russian research station in Antarctica is sucked up by a giant magnet ship. This menacing disappearance sparks the Anti-Villain League to try to recruit Gru to find the perpetrator of the crime. At first, he refuses to get involved, but, when his girls’ safety is threatened, he has a change of heart. There is that, and there is pretty AVL agent Lucy Wilde (Kristen Wiig) who is to assist Gru on his mission. “Despicable Me 2” does not have any of the freshness and originality of its predecessor. It feels like a typical sequel that rehashes bits and pieces from the original with tweaks, like making the minions and their hijinks more central to the story. Yes, there are laughs throughout but nothing on par with “DM.” It is a matter of trying to do too much in the allotted time and not having a more focused story. “DM2” is more a series of vignettes than a solid story. It is entertaining, the effects are bright, sharp and colorful and Steve Carrell is, once again, terrific voicing Gru. Now, if more time and care had been given to an actual story….