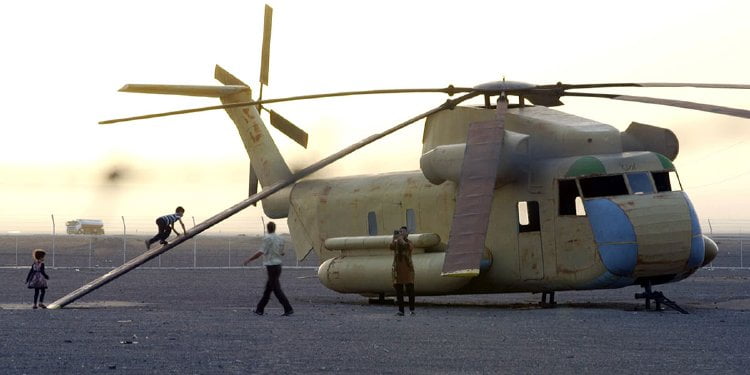 In 1977, Iranian citizens took to the streets in a revolution which would depose their U.S. backed, authoritarian Shah Mohammad Reza Pahlavi, who fled to the States in 1979 as the Ayatollah Khomeini assumed power.  Demanding the Shah’s return to stand trial, revolutionary students stormed the American Embassy on November 4, taking 52 hostages.  Wishing to avoid military conflict, the Carter Administration attempted diplomacy for over a year before the President agreed to the ill-fated rescue mission that would collapse at their Iranian staging area, “Desert One.”

Arriving right on the heels of “Coup 53,” the British documentary that sets the political background for Iran’s hatred of the U.S., is Oscar winning documentarian Barbara Kopple’s ("Harlan County U.S.A.," "Shut Up & Sing") incredible retelling of the heroic rescue attempt of the Iran hostages in 1980 which cost 8 soldiers’ lives.  Utilizing never before heard voice recordings between Carter and his generals, we feel the heavy weight of a Commander in Chief who almost foretold disaster when he said victory would belong to his military but failure would be his defeat alone.

Kopple paints the historical background in broad strokes, the Shah, who tortured and killed his own people, received by American presidents through the decades.  Jimmy Carter was in a tough spot when the cancer afflicted Pahlavi took refuge in our country and, as Ted Koppel states here, his publicized statements about avoiding military intervention put him at a disadvantage.  Support for the President soured as the hostage situation dragged on with no end in sight.

Kopple looks at the situation from every angle, interviewing not only Jimmy Carter, his vice president Walter Mondale and Koppel, but members of Colonel Charles Beckwith’s Delta Force (the special ops unit who volunteered for the mission), former hostages, former hostage takers and a gentleman who, as an 11 year-old, was on the bus which unexpectedly arrived at Desert One at an inopportune time.  She also uses archival footage, reminding us of the controversial stance of hostage mother Barbara Timm, who went to Iran just as the travel ban was about to be imposed, and the saber rattling coming from the Reagan campaign.

We see the audacious plan, which called for 8 military helicopters to fly from the USS Nimitz to Desert One where trucks would take the soldiers under cover of night to the Embassy, via old school retro animation.  There, they would blow a hole in the Embassy to escort the hostages to a neighboring soccer field where the helicopters would pilot everyone out.  As all their intelligence on the ground had been taken hostage, the military had to rely on Koppel’s news footage for information about such details as which direction doors opened.  The number of moving parts was formidable.

What they didn’t account for was a bus with 40 Iranian passengers, a fuel truck, multiple mechanical issues with their helicopters and a sandstorm celebrated by the Iranians on the anniversary of the failed mission to this day as a gift from God (a mosque has been built at the Desert One site, where abandoned U.S. military equipment still resides).  Descriptions of the scene, when a helicopter crashed into the C130 there to refuel it resulting in a fireball, are horrific.  With dawn approaching, Delta Force had to abandon the site, leaving behind our dead.  The burnt bodies of U.S. soldiers were paraded in the streets of Tehran (be prepared for some gruesome photographs and footage of Iranians mocking our dead).

The Shah’s death and the onset of the Iraq Iran War changed circumstances enough that Carter was eventually able to negotiate the release of the hostages.  Two survivors confirm their absolute belief that the Reagan administration delayed their release to coincide with his inauguration, a slap in the face to Carter who had worked for their release until literally the last hours of his presidency.

“Desert One” is a compelling, fully fledged historical document of a doomed rescue mission.  Kopple’s intent to honor these men’s bravery comes through loud and clear.

1979 and 1980 were memorable years for many reasons, including the fall of Jimmy Carter, the rise of Ronald Reagan and the Iran Hostage Crisis. That crisis was made worse when the President Carter ordered the ill-fated rescue mission that ended in disaster in “Desert One.”

Barbara Kopple is one of the world’s eminent documentary filmmakers so, for me, seeing “Desert One” was a no-brainer. The reason I anticipate a Kopple film is they always inform-entertain-educate (my three words on what a good documentary should be) and they are always detailed and thorough in their telling. The director and her talented team do just that, again.

We get an in-depth look into Operation Eagle Claw, the mission to free the hostages – rescue team selection (mainly Delta Force troops), equipment needed (six helicopters plus two reserve and two C-130 transport planes), the plan (land in the desert to rendezvous, head into Teheran, invade the embassy compound, get the hostages and leave). Note that the military planners' source of intelligence was ABC News.

The plan, set on a clear, moonlit night, seemed destined to succeed. But, things go terribly wrong: an unexpected dust storm disables two choppers, the “remote” desert road, only used by “bandits,” teems with civilian traffic, then, a third copter goes down, prompting the President to pull the plug and abort the mission. The troubles do not stop, though, and another aircraft collision ends in eight would-be rescuers killed.

The telling of the aborted mission is more than enough to fully fill the run time of “Desert One,” Kopple and company, though, also give us the history of events that led up to the rise of fundamental Islam in Iran, the hostage taking, rescue attempt and the political aftermath and turmoil that has been our plight since.

The filmmakers give us the history of the region from the democratically-elected Iranian government under Mohammad Mosaddegh and threat to nationalize the Iranian oil industry, the overthrow of that government by agents of the CIA and MI6 and the installation of the Shah to keep the US and Britain awash in oil. (And, we know how that turned out.)

There is a whole lot to ingest in this insightful, well-researched and constructed documentary that shows the nuts and bolts of the rescue mission, in particular, what led up to it and what happened after. It is also and excellent companion piece to Taghi Amirani’s “Coup 53,” which delves into the Mosaddegh overthrow and its generations-effecting results.