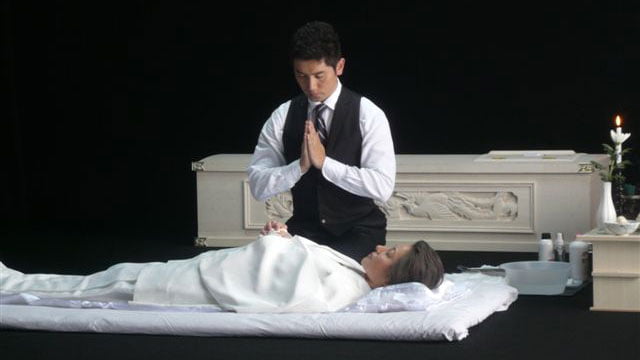 Concert cellist Daigo Kobayashi (Masahiro Motoki) loses his job with a failing symphony orchestra. He peruses the classified ads and applies for a job that he thinks is for a travel agency. He is shocked to find out that the employer is a funeral professional who specializes in preparing dead bodies for their “Departures.”

Cellist Daigo Kobayashi (Masahiro Motoki, 1996's "Shall We Dance?") is in shock after the orchestra he plays for is disbanded. Unable to get a job in his field, he answers an ad that promises high wages in what he believes to be the travel industry. But a misprint of the word 'departed,' which would have clarified that the job was with an undertaker, proves fortuitous for Daigo who comes to understand the nobility and affection required in dressing corpses for their "Departures." From the country who has given us such great filmmakers as Ozu, Kurasawa (both Akira and Kiyoshi), Yôji Yamada and Hayao Miyazaki and provocateurs like Nagisa Oshima and Shinya Tsukamoto, comes the Foreign Language Oscar submission from director Yôjirô Takita, who made a series of 'pink' films with titles like "Molester Train: Rumiko's Ass" and "Iron Chef" television writer Kundo Koyama. Japan's strategy may have paid off as they were awarded the Oscar, but it just goes to show that the changes in the rules adopted after last year's fiasco, when older Academy members neglected to even nominate the Cannes Palme d'Or winner "4 Months, 3 Weeks and 2 Days, were not enough to fix this category. Yes, the senior supporting players in the film are affecting and the film's underlying sentiment is honorable, but lead actor Masahiro Motoki mugs through this cloying and cliched film which director Takita lets drag on interminably. Daigo is embarrassed to tell wife Mika (Ryoko Hirosue) about his new job (the playing of string instruments has been revered in such Japanese films as "Together" and "Tokyo Sonata") and his concern proves valid as she not only looks down upon it but leaves him. Daigo, however, has become the protege of a master in his art, Ikuei Sasaki (Tsutomu Yamazaki, "Tampopo"), and soon realizes the importance of the ritual of washing and dressing a deceased body for the loved ones left behind. Of course, in a movie like "Departures," this ritual will become personal experience for Daigo, and not just once. Wife Mika will become teary eyed the first time she watches her husband in action and they will exchange many meaningful glances (which is at least better than the pop-eyed stare that is usually on Daigo's face). Daigo does not forget his love of the cello, either, which he plays in all kinds of normal places like mountain-ringed valleys, the better for Takita to employ circling crane camera shots. Yamazaki provides much needed dignity to the film and Kazuko Yoshiyuki ("Kikujiro," "Taboo") is charming as Tsuyako Yamashita, the woman who refuses to retire so she can continue to care for her bathhouse customers. Comic relief is provided by her customer Shokichi Hirata (Takashi Sasano, "The Hidden Blade"), who turns out to be closely aligned to Daigo's new line of work (which we discover in a scene which is horrifically tone deaf - a son asks to watch his mother's cremation, sobbing at the window slit into the crematorium - Holocaust imagery is the only thing that can come to mind). Takita does illustrate the ritual of Japanese undertaking with tender sensitivity, but his film falls too often into maudlin sentimentality. He's also a keen believer in the over indulgent attitute that one cannot have too many endings, a failing that squelches any of the picture's merits. For a much better recent picture on death, which is German but takes place in Japan, rent Doris Dorie's "Cherry Blossoms."

Director Yojiro Takati’s lyrical, beautiful looking film won this years Oscar for best foreign language film and 10 Japanese Academy Awards. However, awards do not necessarily mean it is the best and “Departures” is not. We have seen many of the foreign language films proffered for Academy consideration and the Japanese entry would not be on my list. As I said, this is a beautifully rendered film but also a self-indulgent one. As Daigo begins his new career, we see the loving care that the casketing ceremony – the preparation of the departed love one, in front of the bereaved family, for their journey to the next world. The ceremony is shown in great, delicate detail and is fascinating to watch – once or twice. Here though, Takati takes us down this preparation path many times, far too many. As such, what would have been a solid, well-made film at 85 or 90 minutes clocks in at over two hours long. As such, I found myself watching the clock and begging for this bloated opus to end.