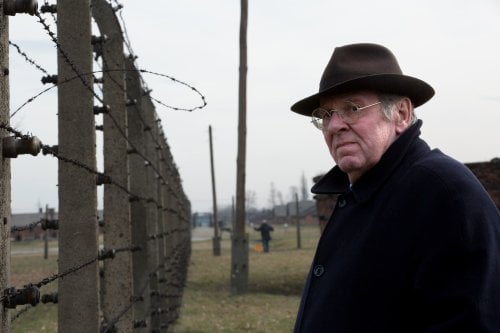 Historian Deborah Lipstadt (Rachel Weisz) has long been a proponent and supporter for the victims of the Holocaust, keeping the tragedy alive in our minds. In one of her books, she declared that Holocaust denier David Irving (Timothy Spall) outright lied that the horrific outrage never happened. Englishman Irving sued Lipstadt for libel, prompting a trial that went on for years in “Denial.”

Emory University's Jewish History and Studies Professor Deborah Lipstadt (Rachel Weisz) is giving a talk after publishing her book 'Denying the Holocaust: The Growing Assault on Truth and Memory,' when she's surprised by the presence of David Irving (Timothy Spall), a British denier who offers the audience $1,000 to find a document that proved the Holocaust happened. She'll be upended again when she learns he's suing her in his own country and that British libel law dictates the defendant has the onus of proving the truth in "Denial." Working with an adaptation of Lipstadt's book by David Hare ("Wetherby," "The Hours") director Mick Jackson ("L.A. Story," "The Bodyguard") rounds up a high profile cast for a courtroom drama with high stakes. The film operates on three levels as it studies the Holocaust through a legal lens, views an American struggling within the British court system and develops character to counter snap judgements. Weisz, wielding a convincing Queens accent, is a brainy and passionate Lipstadt, but she's clearly on the ropes against Irving's attack. Spall, looking much older and thinner than when we last saw him in 2014's "Mr. Turner," gives the effect of an academic rat in his pinstriped three piece suits and overgrown graying hair (cinematographer Haris Zambarloukos frequently frames him behind windows and doorways, enhancing the effect). It is Andrew Scott (Moriarty in TV's 'Sherlock') as Anthony Julius who explains the differences between the two country's legal systems, including the fact that he, as a solicitor, would prepare the case but that a barrister must be hired to present it in court. Where Julius presents a chilly, businesslike persona, Tom Wilkinson, as Scottish barrister Richard Rampton, is the one who forms a relationship with Lipstadt after initially confounding her during a trip to Auschwitz. First Lipstadt's shocked when an English Jewish group doesn't fall in with her plans, asking her to settle rather than chance a disastrous loss. She wants to take the stand and promises survivor Vera Reich (Harriet Walter, "Sense and Sensibility") she'd have her day in court, but Rampton's gentle logic slowly convinces her this is not the right course. It's fascinating watching Irving, who represents himself, go toe-to-toe with Rampton, whose damning argument attests to the precision and expansiveness of his research. Even then, the judge (Alex Jennings, "The Wings of the Dove," "The Queen") is so studiously even-handed, his questioning of Rampton leaves no assurance of his verdict. "Denial" is an actors' film, one of carefully chosen words and considered tactics. Its drama lies in the viewing of a devastating historical event through the particulars of the law. Grade:

I vaguely recall the lawsuit that was sparked by Lipstadt’s book, Denying the Holocaust (1993), where she called out Irving as a liar. Here in America, the onus of proof lay on the party bringing up the libel suit. When Irving declared his suit, it was in Britain, where the burden of proof is put upon the defense. A substantial part of story is about American Lipstadt and her confusion and frustrations in dealing with the English legal system. She conveys well the stranger-in-a-strange-land bewilderment when told, not asked, to not testify for her own defense. Weisz’s reaction to the system is something I can identify with. Decade’s long film and TV director Mick Jackson – big screen “The Bodyguard (1992),” “Volcano (1997),” small screen “Live from Baghdad (2002)” and “Temple Grandin (2010)” – takes the reins for this taut, well-made courtroom drama that pits truth against lies. It is also an examination, through an American’s eyes, of a legal system so different, in some ways, from our own. While the story is a straightforward telling of the court battle between the liberal historian and the ultra-conservative denier, it is the excellent cast that brings “Denial” up a level. The story and how the lawsuit unfolds over years are enhanced by its actors. Rachel Weisz personifies Deborah Lipstadt with her dedication, energy and determination that those who died in the Holocaust not be forgotten, putting her career on the line to do so. Timothy Spall, as the bigoted denier David Irving, gives a convincing performance of a man who believes, in his mind, that the Holocaust never occurred. We know he is wrong but he has the right to speak his mind. The case becomes a true battle of wills as both sides muster their legal forces for the fight, with Irving defending his right for free speech alone. The superior supporting cast is led by Tom Wilkinson as Deborah’s barrister – in Great Britain the role of a lawyer is cut in two (an interesting thought, don’t you think?) of solicitor and barrister – who pleads her case before the court with dedication equal to his client. The other supporting roles, which could have been two-dimensional, are given life by the actors. Those playing the legal team supporting Deborah includes Andrew Scott, as her chief solicitor Anthony Julius, Jack Lowden as her other solicitor and Caren Pistorius as Laura Tyler as legal researcher advisor all coming across as real people involved in real, important things. The judge hearing the case, Sir Charles Gray (Alex Jennings), also comes across as believably legal minded and suited to try such a important case, showing the careful deliberation of the sole arbiter. Harriet Walter, as survivor Vera Reich, who pleads Deborah for her and others be allowed to testify (they were not), has a tiny role but her representation of the survivors is moving. The courtroom drama becomes a public issue as the British press follows the years long trial, There is a polarization – liberal versus ultra-conservative – among the public as they draw sides. It is a controversial court case and a significant one in a world where many either just want to forget the Holocaust or deny it existed at all. Deborah Lipstadt’s battle for justice for those without a voice struck a significant blow against the lies. “Denial” does this well, indeed.