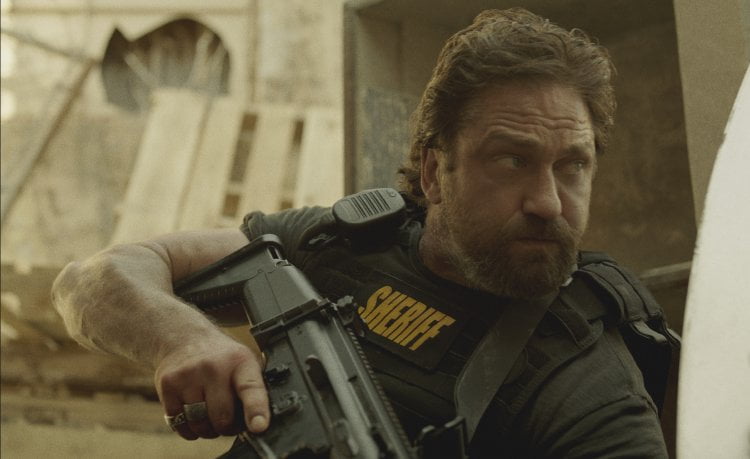 Los Angeles is the bank robbery capital of the world with more heists than any other city on earth. But, the Federal Reserve Bank of LA has never been robbed. The challenge to be the first is too tempting for a cadre of high tech criminals in “Den of Thieves.”

In Los Angeles, the bank robbery capital of the world, an armored car is surrounded in a donut shop parking lot with military precision, but the nerves of two of its occupants exiting the building infect one of the robbers. Shots are fired from automatic weapons as the LAPD arrive and a slaughter ensues. Merriman (Pablo Schreiber, "13 Hours: The Secret Soldiers of Benghazi"), the leader of the Outlaws, is clearly upset to inform his crew 'Now we're cop killers.' His counterpart Nick Flanagan (Gerard Butler, "London Has Fallen," "Geostorm"), leader of LASD elite crime squad the Regulators, is hell bent on breaking up a "Den of Thieves." "London Has Fallen" screenwriter Christian Gudegast, makes his directorial debut with a crackling heist movie that portrays its Outlaws as well spoken ex Marines, some family men, its Regulators as foul-mouthed, tatted heavy drinkers who scoff at the rules. Unfortunately, it is this element of his film that weighs it down, the disintegration of Nick's marriage an indulgence which unnecessarily pads the film's 140 minute running time, his 'good' bad guys tainted from the onset by their mass murder. Despite these flaws, "Den of Thieves" is a helluva lot of fun, Butler's most engaging performance in many a moon and a potential breakout for Schreiber. 'Big' Nick is hung over when we meet him, his natural state as it turns out. Assessing the crime scene, he plucks a donut from a bloodied box on the ground, leaving it, he tosses the remains onto the ground, earning the ire of an FBI agent Nick disses for being vegetarian. The hirsute Butler looks and talks more biker gang than cop. He also talks too much, something which raises Outlaw driver Donnie's (O'Shea Jackson Jr., "Straight Outta Compton") suspicions when Nick engages him at his job bartending at Ziggy's Hoffbrau. Giving up no useful information, Donnie is maced when he gets into his car to go home for the night, awakening to be grilled by the Regulators, Nick informing him 'We're the bad guys.' Donnie fesses up to his role, won by his feat of having received California's highest ever speeding ticket, but claims no knowledge of the heist plotting. He's released back into the wild tagged by the Regulators. Back in Outlaw territory, Merriman lays out their next mark, the Federal Reserve Bank of Los Angeles where $30 million in unfit bills becomes unaccounted for daily just before shredding. It's never been successfully robbed, but Merriman has a plan, one which involves getting Donnie on the inside as a Chinese food delivery man and a grandiose distraction. Gudegast is going for a "Heat" like standoff and there is a lot of pleasure to be derived from Nick and Merriman's macho posturings. In two completely dialogue-free scenes, Nick challenges Merriman, losing the first at a shooting range, only thinking he's won the second with Merriman's stripper wife. But one has to wonder what the point is of 'outing' Donnie for suspicion when Nick greets him dining with the Outlaws at a Hibachi restaurant, Butler's aggression countered by Schreiber's more powerful calm. (One may also wonder how the Outlaws are able to monitor the movement of police cars, crew member Mack (Cooper Andrews, TV's 'The Walking Dead') feeding the team with their whereabouts from his tablet app.) The film's last act keeps us guessing as to just how Merriman will pull off his heist. The ensuing gunfight in a snarled traffic jam allows for some characterization sorely missing in supporting players (50 Cent's ("Spy") Outlaw has his moment earlier in a comical parental prom date shakedown) before Gudegast delivers his final zinger. Grade:

Big Nick O’Neil is a tough street cop who is willing to bend the rules when it fits his purpose. When an empty armored car is hi-jacked – with deadly force – Nick smells a rat and begins, with his team, to investigate the seemingly nonsensical crime. Meanwhile, heist mastermind, Ray Merrimen (Pablo Schreiber), has gathered his own crack team to pull off the crime of the century and rob the Fed of millions. Screenwriter-turned-director Christian Gudegast and co-scribe Paul Scheuring craft an oft-exciting bank heist movie that is strong on action and a cat-and-mouse tale, too. The two stories run in parallel as robbers pursue their formidable hi-tech mission and Nick tries to foil the crime he cannot quite figure out. The action, as the two paths move relentlessly toward each, is frantic and deadly. At 2 hours and 20 minutes, I wondered, going in to see “Den of Thieves,’ how the filmmakers can sustain an action flick for that long. The answer is: add a sub-story where Nick is in a troubled marriage because of his ne’er-do-well ways and his wife, Debbie (Dawn Olivieri), leaves him and takes his two daughters with her. Way too much time is spent on this sentimental angst, adding nothing of worth to what should be wall-to-wall shootouts, chases and high technology crime. The cast is a real ensemble with Gerard Butler and Pablo Schreiber first among equals. You do not get to know most of the characters too well but enough so get garner your sympathy, particularly O’Shea Jackson Jr. as the apparent dupe in the caper. The action sequences are done with energy equal to the action. Despite the lagging moments, “Den of Thieves” delivers.