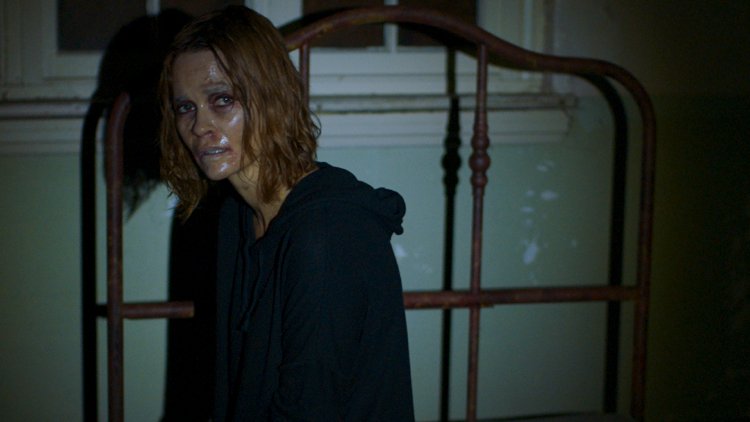 Carly Spenser (Carly Pope, "Elysium") tentatively answers the text of an old friend, Martin (Chris William Martin), only to learn some disturbing news about the person who haunts her dreams – her mother, Angela (Nathalie Boltt, "District 9").  Therapol, a medical research firm found Martin in an effort to contact Carly, who changed her last name after her mother went on two violent rampages that left over twenty people dead.  Now Angela lies in locked in syndrome and Doctor Michael Dolos (Michael J Rogers, "We're All Going to the World's Fair") wants to hook Carly up to electrodes that will allow her to enter her mother’s mind and communicate with her purportedly to ensure that she is alright, but what Carly finds is “Demonic.”

It’s been six years since writer/director Neill Blomkamp ("District 9") inflicted “Chappie” upon us and it appears he is determined to drive nails into his own coffin.  Now he may be going down the Robert Zemeckis route with even less success than that filmmaker, building a film around a technology instead of fine tuning his storytelling.  The volumetric capture technology (260 cameras on a grid creating the equivalent of three dimensional video) he uses for Carly’s trips inside her mother’s mind isn’t even all that impressive, giving those scenes the unreal quality of a video game.  And no matter how preposterous Blomkamp’s easy-to-see-coming ‘twist,’ the film becomes so increasingly boring as it goes along, I literally was screaming ‘make this stop!’ at the screen for it’s entire last half hour.

So, after avoiding her mother for years, Carly dons her white cloth cap and goes under, walks into mom’s brain and finds Angela, the ‘self harming’ scars the doc told her about looking more like deeply carved skin adornment, and proceeds to tell the woman how much she hates her while it is very clear Angela is trying to protect her by warning her to get out.  She reports back to Doros and neuroscientist Daniel (Terry Chen) that the environment was her childhood home, but it was ‘off,’ presumably because mom’s memory was faulty.  But despite the fact that Carly’s been having terrible dreams (one at a remote institutional building where she encounters mom opens the film) and proceeds to have a nightmare featuring a gruesome animal totem, she’s convinced to go under again.  Meanwhile, Martin and Carly’s friend Sam (Kandyse McClure) has gone missing and he’s discovered something really strange about just who owns Therapol – and other companies like it.

Despite this conspiratorial twist which sets the film on its titular ground, Blomkamp fails to conjure chills, scares or any kind of tension.  The movie is like a far less successful retread of “Come True” from earlier this year and merely keeps repeating dreams and its literal mind games ad infinitum to diminishing returns, the film’s villain easy to identify from the get go.  Pope can’t summon any sympathy for a woman who misses every signal the audience easily picks up on, let alone never questions what caused her mother’s psychotic break in the first place, a problem handed to her by the film’s author.  The only thing demonic about “Demonic” is that apparently Blomkamp’s name can still secure distribution for self indulgent ramblings.

IFC Midnight releases "Demonic" in theaters and everywhere you rent movies on 8/20/21.