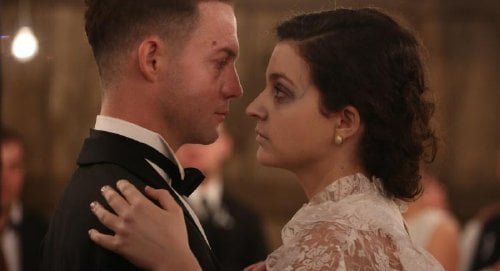 Piotr (Itay Tiran, "Lebanon") is greeted by his father-in-law-to-be (Andrzej Grabowski) at a barge landing on a riverbank. He notes that he'll rebuild the former bridge destroyed by the Germans in WWII. He also has great plans for the old rural home his fiancee Zaneta (Agnieszka Zulewska) has inherited from her grandfather, but on the day before his wedding as he digs a hole for their swimming pool, he uncovers what looks like a skeleton. On their wedding day, it will become evident he's been possessed by a "Demon."

Actually, cowriter (with Pawel Maslona)/director Marcin Wrona's film isn't about demonic possession so much as it a ghost story, a piece of shameful history that refuses to be buried (it is telling that the film opens with a tracking shot of a front loader making its way from an excavation site through a small town out to Zenata's house). It's a remarkable achievement, genuinely creepy yet often slyly funny. With its Eastern European setting, haunting score and a look so desaturated it is almost b&w, "Demon" looks like Bela Tarr decided to make a horror movie. But equal to its art house qualities is its building hysteria, overtaking "Wild Tales" as the ultimate wedding-gone-wrong movie. Piotr may be Polish, but he's from London, English his first language (the film shuttles back and forth between the two languages). He's celebrated by his buddy Jasny (Tomasz Schuchardt), Zenata's brother, while cousin Ronaldo (Tomasz Zietek) remains quietly in the background. After jokes about the swimming pool that will be built, Piotr gets to work, but after his disturbing discovery he spies a kneeling ghostly bride before plummeting into quicksand. Seemingly normal albeit a bit disoriented on his wedding day, the first sign of Piotr's possession is only evident in retrospect, his smashing of a wine glass underfoot corrected by Zaneta ('We do it this way,' she says, tossing her glass over her shoulder). Their first dance is cut short, Zaneta horrified by her husband's sudden nosebleed, but tending to him in their home, thoughts turn to love making. Grandfather's wedding picture is taken off the wall so he cannot witness. Things escalate when the couple returns to the reception in the barn. Piotr's wedding ring is missing. The Doctor (Adam Woronowicz) who has publicly foresworn alcohol secretly drinks from a flask in the newlyweds' house. Piotr gets up to make a toast and begins to ramble. He sees the ghostly woman glide into the back of the hall and extends a tribute to 'Hana,' trying to dig himself out of his faux pas by telling guests Hana is his name for the front loader. In a dazzlingly shot sequence, everyone begins to dance, Piotr first with Zaneta, then mother-in-law Gabryjelska (Katarzyna Herman), but after he finds Hana in his arms he contorts, falling back into a full fledged seizure. As Zenata's parents try to keep the wedding party none-the-wiser ('it's food poisoning' dad reports, his guests all dolefully looking down at their plates), the professionals are called into the house. The anxious priest (Cezary Kosinski, "The Pianist") suggests epilepsy, schizophrenia or multiple personality disorder while the doctor insists on possession. But it is the Jewish professor (Wlodzimierz Press, "Europa Europa") who thinks to ask Piotr, who's been speaking in Yiddish, who he is and a tragic story tied to Zenata's family history is recalled. Wrona's film also has echoes of the uncovered Polish past of Pawel Pawlikowski's "Ida," but while that film dealt with willing disclosure, this one's characters wish to suppress, the horror genre a wily vehicle for a 'monster' escaping its bounds. Wrona keeps us guessing as to just who is complicit, Zenata's luring of her husband to the dance floor tinged with something perversely wanton. Zenata's father has protested Piotr's quick courtship from the onset while her mother desperately whips her guests into more and more drunken revelry ('It's already paid for!' she protests when her husband nixes rolling out the cake). The Priest, Doctor and Professor are the Greek Chorus of a 'walked into a bar' joke, their counterpart three little girls whose appearance is at once innocent and sinister. "Demon" wraps bookending its beginning, Wrona's movie folding out only to fold back into itself, a tip of the hat to "The Shining" adding another layer of mystery. Grade: