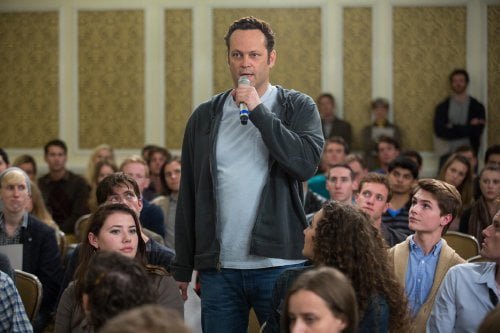 Black sheep not only of the family but the family business, David Wozniak (Vince Vaughn) gets a wake up call when he learns that all those trips to sell sperm at a fertility clinic twenty years prior have resulted in 533 children and 142 of them are petitioning to have his identity revealed. While clandestinely trying to help, David continues to hide his identity with the now ironic job as a meat market "Delivery Man."

Canadian writer/director Ken Scott remakes his own French Language film "Starbuck" without changing a thing but the language and location, missing the opportunity to fine tune the problems with his original haphazard, contrived and unfocused script (click on the "Starbuck" link if you want a plot summary - nothing's changed, except for the fact that this one never explains David's donor alias). For those who haven't seen the first film, this might be barely passable entertainment, but for those who have, it's an interminable bore. After finding out about the suit, David goes to lawyer friend and beleaguered single dad Brett (Chris Pratt, TV's 'Parks and Recreation'), who advises him to keep his head down before giving him a packet of profiles of 142 of his kids - which Brett then insists he not look at. "Starbuck/Delivery Man" is full of this type of illogic, which only gets worse when a half dozen of them realize they all know the man who could be their father's age, yet never make the connection. The social problem that 533 similarly aged adults born in the same geographical location might engage in accidental incest is never addressed. The fatherhood issue is brought closer to home when David discovers his girlfriend Emma (Cobie Smulders, TV's 'How I Met Your Mother') is pregnant and wants to raise the child on her own, David having never exhibited responsibility. Neither Smulders nor Vaughn bring any sense of past history to the relationship, nor is there any chemistry moving forward. None of the actors playing David's children stand out in any way and one, Kristen (Britt Robertson, TV's 'Under the Dome'), who is introduced battling a serious drug problem, solves everything with a job at Bloomingdale's. Vince Vaughn is serviceable, but his ineptitude isn't as convincing or charming as what original star Patrick Huard brought to the role. Chris Pratt lacks the comic timing that made Antoine Bertrand a scene stealer. As in the first film, David's father (Andrzej Blumenfeld, "The Pianist"), has the best scene, a two-hander explaining a father's love for a son (and Scott even compromises this with the character's hot and cold behavior). The production is mediocre, its most notable aspect the cheap suit costumer designer Melissa Toth found to add character notes to Brett for his courtroom appearances. Several times cinematographer Eric Alan Edwards's ("Couples Retreat") focus on a character delivering dialogue in the front of the frame is distractingly off. A few amusing lines, one spectacular diving board pratfall and gobs of manufactured sentiment are not enough to sustain a feature length film. "Delivery Man" delivers a parcel which should be returned without opening.