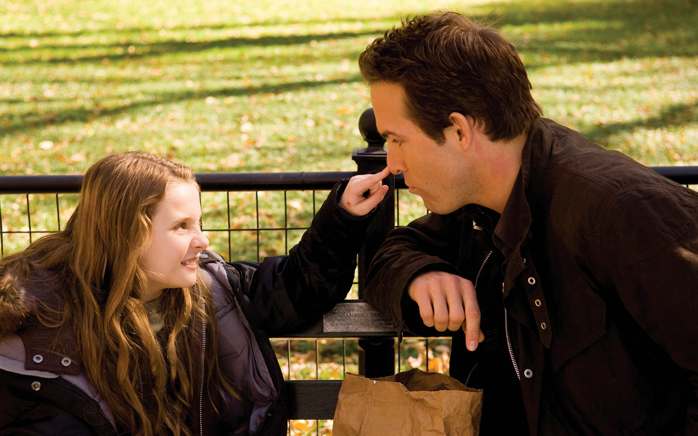 Soon to be single father Will Hayes (Ryan Reynolds, "Van Wilder," "The Amityville Horror") has his hands full with precocious young daughter Maya (Abigail Breslin, "Little Miss Sunshine") who asks graphic questions about her sex education class in public on the way to Hayes's New York City apartment, then insists she will not sleep that night until Will reveals his romantic past. After he's been worn down, he insists on changing names to see if she can guess the identity of her mother, who he is now divorcing, "Definitely, Maybe."

Writer/director Adam Brooks ("The Invisible Circus," "Wimbledon") looks to have a Valentine's hit on his hands with a vehicle obviously meant as a breakthrough for star Reynolds, but while "Definitely, Maybe" is definitely a cut above the usual February fodder, it maybe feels too second hand with roots in everything from "The Princess Bride's" bedtime story structure to television's "How I Met Your Mother's" teasing central concept. Still, this romantic comedy offers plenty of performance pleasure, particularly from the pairing of Oscar winners Weisz and Kline. 'What's the boy word for slut?' Maya asks dad whose reaction shows shock at both the implication and his inability to provide an answer. Then he begins to fill us in on the reason for the question, all the way back to 1992 'before cell phones and email' (huh? I was using email in 1978, early, yes, but I think they meant the world wide web) where Will is leaving home town sweetheart 'Emily' (Elizabeth Banks, "Seabiscuit," "Spider-Man 3") in Wisconsin for the naively hopeful environs of a New York City Clinton campaign office (another well planned February release date tie-in). There he meets 'April' (Isla Fisher, "The Wedding Crashers," "The Lookout"), a cheerfully unrepentant political holdout there for the paid office work. But of course while their opposites attract quotient is painfully obvious, Will's more intrigued by 'Summer Hartley (Rachel Weisz, "The Constant Gardener"), Emily's old school chum he's been tasked with returning a book to. Egged on by roommate Russell McCormack (Derek Luke, "Antoine Fisher," "Lions for Lambs") Will peeks into the package only to discover titillating diary entries of collegiate female lust and when he shows up on Summer's doorstep, she's quick to sniff him out. But Summer is not the first person Will meets at her apartment - that would be her 'dad,' Hampton Roth (Kevin Kline, 2006's "The Pink Panther," "A Prairie Home Companion," having a ball) her wittily undry literary professor lover who challenges Will's man status with a lethal mid afternoon whiskey competition that leaves both of them unconscious. Summer's mad about Hampton, but realistic enough to recognize his womanizing ways, so Will finds himself in a sophisticated New York relationship. Brooks keeps weaving the other two women in and out of the mix, even though Maya's declared the first rule of romantic screenwriting (the first girlfriend is never the last), a rule we expect to be broken. This he does clumsily, en route to the happily ever after wrapup we route for all along, that, while executed better than the former, has been too long coming with the manufactured obstacles set along its way. Brooks fares far better with the details that give a film its flavor, like the way April's pursuit of the copy of 'Jane Eyre' inscribed by her dad results in a varied collection or how the price of cigarettes reveals small town astonishment at big city living or turns into a contest proving frugality over affectation. Will's political career is also nicely arced, from initial high expectations laid low to pride in promotion and from idealism to conflict, compromise and disillusionment. Reynolds acquits himself well in his first big starring role - he's got slightly exotic boyish good looks that make up for somewhat pedestrian charm. He has absolutely no chemistry whatsoever with Banks, though, whose squeaky clean Emily (the reason for their initial breakup is never believable, a mere plot prop) is the girl next door personified. Isla Fisher, though, proves herself an adept and appealing comedienne, equal to the more experienced Weisz. They both spark with their leading man, with the smugly seductive Weisz doing double duty with her less self-assured relationship with Kline. That chemistry is sure-footed enough that one believes Roth steps away from Summer for her own good while maintaining lifelong friendship and Kline's eccentric, boozing, seducer of students is another great, welcome comic turn from the actor. Breslin, last year's delightful little Miss Sunshine, is merely OK here, a bit forced, her performance suffering from direction that perhaps ascribed too much experience. Adam Ferrar of TV's "Rescue Me" adds some nice comic spice as Will's campaign office boss Gareth. A late cameo by a jogging ex-President may not deliver the intended nostalgic feel good vibes given his recent campaigning tactics. The production delivers 1990's New York without overdoing the fashion statements and gives its characters living spaces that jive with their economic status (how refreshing!). Music is used to propel the action through the oncoming decades, with Nirvana's "Come As You Are" a particularly notable stepping stone.