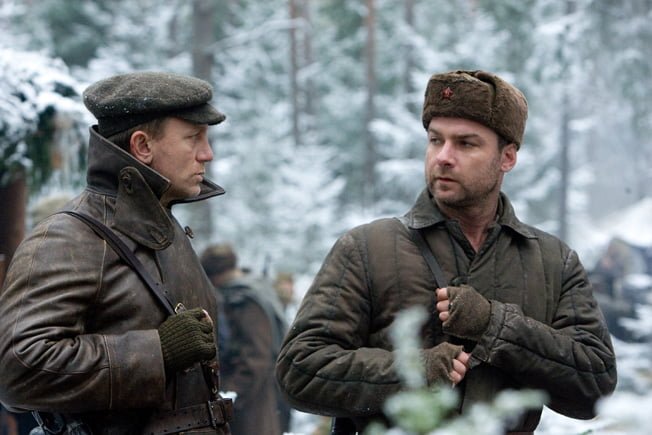 In a small Jewish village in Nazi-occupied Poland, fanatical Nazi SS troopers attack unexpectedly and all of the inhabitants are forced from their homes and shipped to concentration camps to face imminent death. The three Bielski brothers ­ Tuvia (Daniel Craig), Zus (Liev Schreiber) and Asael (Jamie Bell) ­ escape the roundup and hide in the Byelorussian forests as the storm troopers ruthlessly haul away their friends and neighbors. They have two choices ­ surrender to the fascists or fight ­ and the tough band of brothers decide to make a stand against the Nazi oppressors to show their “Defiance.”

Director Edward Zwick came to filmmaking fame with his based-on-fact and finely-crafted 1989 film “Glory.” His filmography is impressive, since, with such works as “Courage Under Fire,” “The Siege” and “Blood Diamonds.” Even his films that less-than-thrilled me, “Legends of the Fall” and “The Last Sumurai,” still show his excellent craftwork and ability to create sweeping epics. “Defiance” falls in between the former and the latter films. Another based-on-a-true-story flick, “Defiance” again shows that Zwick has a real talent in recreating the look and feel of his subject and time, making his latest great to look at. The story of the battle for survival against the Nazis is a well traveled one and put me in mind of Lewis Milestone’s 1943 anti-fascist “The North Star” and Paul Verhoven’s 1977 “Soldier of Orange.” The craftwork is, once again, there in “Defiance” but the adaptation of the Nechama Tec book (by Zwick and Clayton Frohman) is passionate but stilted. I do not think that it is intentionally derivative but it’s smart and cunning David against the monolithic monster Goliath has been done before. Acting is solid but not memorable with Daniel Craig playing out of his usual tough guy persona as the pacifism-embracing Tuvia, a man who sees saving lives and his Jewish community just as important as being strong in their fight against the Nazis. Liev Schreiber plays the militant Bielski brother, Zus, who is as dedicated to fight and kill the Nazis as Tuvia is to save Jewish lives. Jamie Bell, as youngest sibling Asael, is bland, almost transparent, in his role. Supporting characters are generic. It is the look of “Defiance” that is the draw. Cinematographer Eduardo Serra does an excellent job lensing, using an overall bluish hue that gives the film a monochromic look that lends to the cold harshness of war. Attention to nearly all details is first rate, with the exception of the obvious CGI used to create the snow effects. That is a niggling complaint on the fine production. The story needed a new twist.