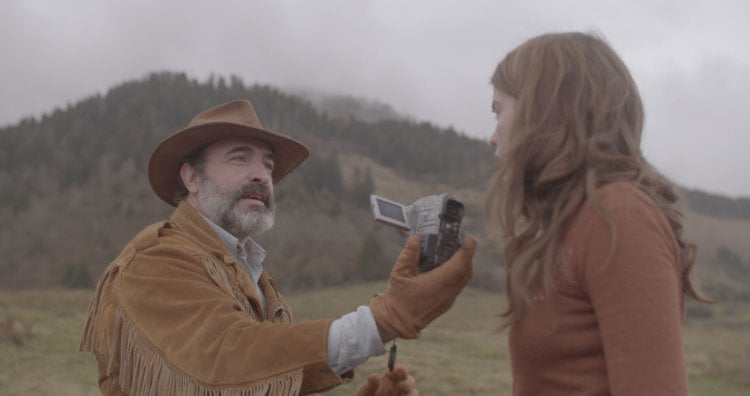 Recently divorced Georges (Jean Dujardin, "The Artist")  is adrift in the French Alps when he spends almost all of his available funds on a vintage fringed suede jacket from Monsieur B. (Albert Delpy, "2 Days in Paris").  Obsessed with his ‘killer style,’ George begins to converse with the article of clothing which has given him a new identity, agreeing on fulfilling a dream of becoming the only person in the world to wear a jacket in “Deerskin.”

Writer/director/cinematographer/editor Quentin Dupieux ("Rubber") could be called the René Magritte of cinema, his work generally absurdist and comedic, but with his latest he’s trying something a little different.  The film is still funny, but it is also about madness and movies themselves.  He’s also picked the perfect film to pair up with the Oscar winning Jean Dujardin, a comedic actor of great skill.

A prologue of three young people swearing off ever wearing a jacket again while piling said items into a car trunk sets an odd tone that will make perfect sense by the time we realize this is a flash forward.  We meet George driving up alpine switchbacks to the chalet-like abode of the older man who will show him ‘the beast,’ the jacket which will become George’s obsession.  When he pays in cash, Monsieur B. ‘throws in’ a digital video camera.

George checks into a hotel which looks typical for the area on the outside while the drab and dated interior with its curving wooden staircase suggests the Western genre Dupieux takes his tropes from.  A ‘saloon girl’ will appear in the form of bartender Denise (Adèle Haenel, "BPM," "Portrait of a Lady on Fire"), talking to a regular (Marie Bunel, "The Chorus") she will have to inform George is a hooker when he thinks she is interested in him.  He also believes they are discussing his jacket, inviting both amusement and interest.  When Denise asks him what he does, he hesitates, then, remembering the video camera he’s begun using (mostly to shoot himself posing in his jacket), tells her he’s a filmmaker. Bingo!   Denise is an aspiring editor (she tells him she put “Pulp Fiction” in order) without an outlet.  The two begin to feed off of one another, George spinning tales of producers in Siberia he cannot reach to get ‘loans,’ Denise slowly beginning to take over his ‘film.’  What Denise doesn’t know is that George believes his jacket is talking to him and that his desire to eradicate all other jacket wearers is turning murderous, spurred on by Denise’s orders for ‘closer shots and more blood.’  A local cinema becomes a hunting ground.

Dujardin is a great comedic actor capable not only of subtle shading, but of true empathy with his characters, a quality that makes even his most obnoxious ones endearing.  Haenel’s Denise is grounded and determined, any qualms about George swept aside as she eyes her own prize, her naïveté, so easily attributable to her environment, her own fringe jacket, a shell cloaking her naked ambition.  Dupieux carries his Western elements throughout, a dead hotel receptionist (Laurent Nicolas) a useful prop, the film’s climax a deliciously on point surprise.  Janko Nilovic’s riff of inverted trumpet blast followed by a bass drum reflects the thriller genre yet is also employed as comedic flourish.

With “Deerskin,” Dupieux has given us a psychological study, a cinematic exercise and a serial killer horror comedy all efficiently wrapped up in under 80 minutes.

George (Jean Dujardin) is going through a messy divorce and is in the throes of one serious mid-life crisis. He cleans out his bank account, hits the road and answers an ad for a very special, fringed jacket made of “Deerskin.”

“Drama is easy, comedy is hard” is a quote from actors that has been around since ancient Greek times. (Well, maybe not in those exact words.) Jean Dujardin is one of those thespians that make comedy look easy and he does it again here as the troubled and self-centered George.

Once he acquires his long-sought deerskin jacket, which comes with a special bonus – a digital video recorder – he heads to a small, remote French alpine town. He settles in and, when asked what he does by local barkeep, Denise (Adele Haenel), he thinks about it and says, “I’m a filmmaker.”

That statement brings George to his new life as a movie director. The trouble is, though, he does not know the first thing about making a movie. He plays around with his new camera and steals a book, Occupations in Filmmaking, from a local shop but, still, remains clueless. Then, Denise tells him that she is a film editor and asks to see his footage.

George’s delusion, and the fact that he and the deerskin jacket have a special bond, leads the two to develop their film concept, suggested by Denise. The star of the film, the deerskin not George, wants to collect all of the jackets in the world so that George’s precious cloak is the only one left. He takes the “concept” to bloody fruition with videos of his victims and their seized outerwear and gives it to Denise.

She loves the footage and tells George he has to make a concept reel to show to investors, but, she says, there has to be “more blood.” George takes her advice to heart and he, with the help of the jacket, gives her exactly what she wants. All the while, George works hard to convince the town folk that he is a genuine filmmaker, but it is all a pack of lies.

Dujardin is, as always, a presence on the screen with his charming, often childish and demanding, petulance as he actually starts to believe his delusions of greatness, all because of the miraculous jacket that talks to and advises him.

This little film, written and directed by Quentin Dupieux, is made grander by Dujardin’s starring turn and Haenel’s convincing foil, as Denise, to the deluded George. There is an essence that Dujardin brings to his roles that is the always the same and always different – like Humphrey Bogart.