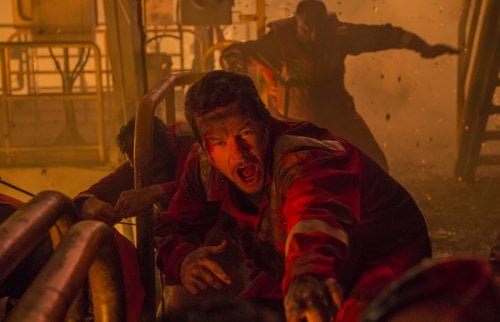 A bird hits the windshield of the helicopter transporting Transocean crew to the oil rig 40 miles off the coast of Louisiana in the Gulf of Mexico where they'll be for three weeks before returning home. It shakes up the two visiting British Petroleum (BP) officials on board. Was it an omen for what was about to happen on April 20th, 2010 on the "Deepwater Horizon?"

Director Peter Berg's ("Lone Survivor") second project with star Mark Wahlberg (their third, "Patriot's Day," arrives in December) isn't about the largest environmental disaster in history, but the events which led to it. It's a disaster movie, albeit one which really happened. Yet although BP's criminal negligence in pursuit of the bottom line and the heroics of Transocean crew members are highlighted here, the film is a by the numbers account of the incident which highlights fiery, explosive destruction over the eleven crew members lost that day. Screenwriters Matthew Michael Carnahan (Berg's "The Kingdom") and Matthew Sand ("Ninja Assassin") open with a bit of cutesy exposition as Transocean chief electronics technician Mike Williams' (Wahlberg) daughter shows her precocious school report on what dad does at work, 'ornery old dinosaurs' the source of the oil dad's company drills for. We then get an overview of the Transocean routine as workers travel from home to the rig. Deputy Dynamic Positioning Officer Andrea Fleytas (Gina Rodriguez, TV's 'Jane the Virgin') is established as a 'man's woman,' getting her hands dirty when her vintage Mustang won't start. After checking in for flights, offshore installation manager Jimmy Harrell (Kurt Russell), Transocean's crew leader, asks a BP official to remove his tie, magenta being the color of their highest alert. On board the Horizon, a floating rig with a deck the size of a football field with a 25-story derrick perched atop, we're quickly placed into the drama surrounding the drill shack. Jimmy learns that the crew who were there to do safety tests were released by Louisiana-based BP manager Donald Vidrine (John Malkovich) without performing them, a $100K expense on a project 43 days late leaking money. Jimmy, whose company has been leased by BP, is outraged and insists on performing a pressure test. It reveals startling results, enough pressure built up to cut a car in half, but Vidrine's insistent that what they're seeing is a bladder effect as no mud's been pushed up by the pressure. Although Mike's already advised that the rig is running on bandaids and bubblegum, he tells Jimmy Vidrine's explanation is possible. Berg cuts to underwater evidence of the oncoming disaster. No sooner has the drilling begun than things go explosively wrong, senior toolpusher Jason Anderson (Ethan Suplee, TV's 'My Name Is Earl') working desperately with his drill shack crew to stop the ensuing geyser of oil and gas, muddy debris raining over the windows that separate management from the workers. Belowdecks, Jimmy's in the shower while Mike Skypes with wife Felicia (Kate Hudson). They both hear something inexplicable and the feed cuts off. As the disaster continues to escalate, Andrea, who's in charge of keeping the rig positioned, is chastised by her supervisor for sending out a distress call ('We don't have the authority'), but when oil-slicked pelicans crash into the cabin of the Damon Bankston, the ship moored nearby, its crew can see what's happening and alert the Coast Guard. We see Jimmy slammed through his shower wall as Mike scrambles trying to get crew onto lifeboats. Worker attempts to 'cut the pipe' and keep the oil from escaping are seemingly foiled by equipment failure, but Berg seems more intent on mass destruction than clarity during his climax. Duty still calls the badly battered Jimmy. Mike goes off to find his friend Andrea while the lifeboat carrying Vidrine leaves them behind. "Deepwater Horizon" is a procedural of a disaster. Berg's done a solid job with the nuts and bolts of the rig's workings, but fails in getting us emotionally involved in its human aspect. The film's best asset is its villain, Malkovich relishing his Cajun chicanery. Grade: