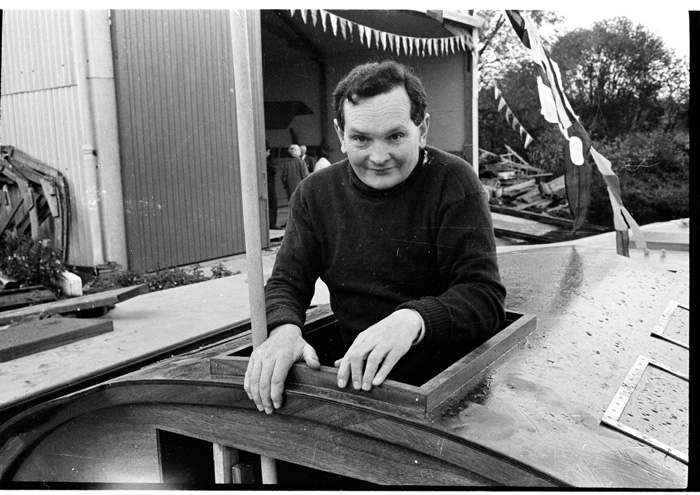 In 1968, nine men signed up for the greatest sailing challenge of them all: each man, alone, will circumnavigate the globe non-stop in their tiny sailing boats. The first to come in wins the Golden Globe sailing trophy; the fastest time to cover the 25000-mile journey wins 5000 pounds. Eight of the contenders are experienced seamen but the ninth, Donald Crowhurst, owner of a failing electronics business, is little more than a weekend sailor. Documakers Louise Osmond and Jerry Rothwell bring us his harrowing story about a man who is in over his head, in many ways, and in “Deep Water.”

Only the year before, in 1967, was one man able to make the solitary around-the-world sailing trek – but that accomplishment allowed stops along the way. The even greater challenge, a non-stop journey across the seven seas, attracted worldwide attention and nine stalwart contenders. Osmond and Rothwell do a fine job of setting the stage for the big race, where being first or being the fastest are the criteria for winning. The real meat to “Deep Water” is the very bizarre story of Donald Crowhurst. Crowhurst laid his fiscal life on the line to gain financing for his ambitious project. He made a deal with entrepreneur Stanley Best, using his house as collateral, which would bankrupt Donald if he withdrew from or failed to complete the race. The die cast, Crowhurst frantically worked to build his boat and launch before the 31 October deadline. It was a telling warning for the amateur sailor when a three-day trip to change his starting point took three weeks to accomplish. He launched only hours before he faced disqualification. The documakers shift between the story of the historic race, with the progress of the voyagers as they circumnavigate the globe, and Crowhurst’s own tale of deception and disaster. Less than two weeks into the nearly yearlong voyage, his boat began to leak badly. He falsified his radio progress reports and logbook, leading the race followers to believe Crowhurst to be having a spectacular race. In the time the other racers journeyed around the world, though, Donald never left the Atlantic Ocean and even made an illegal stop in South America to repair his boat. His only course of action was to pretend to finish the race, last, and avoid any official scrutiny of his doctored logs. Fate would prevent Crowhurst from his hoped-for anonymity. Using the original logs from Crowhurst and the other competitors, film footage taken by the racers – mostly of long shots of the violently rough seas - and interviews with families, colleagues and friends, Deep Water” is a detailed account of one man’s misbegotten ambitions, his failure and desperate attempt to lie his way out of it. It is a real tragedy as Crowhurst was simply trying to save his dignity, his fiscal integrity and his family from shame. One lie led to another until, instead, he sank into a quagmire of deception that could only end in catastrophe. It is a sad, finely crafted documentary that must not be missed – if you call yourself a real film buff.