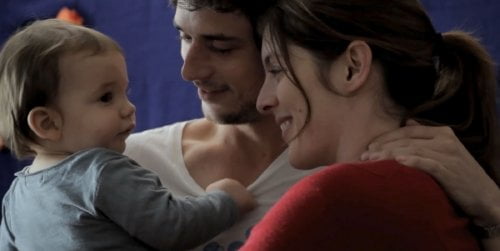 Roméo (Jérémie Elkaïm, "The Queen of Hearts") and Juliette (Valérie Donzelli, "7 Years") are so obviously made for each other that when they have their son Adam, at first it is difficult to believe anything might be wrong. But the oddities - vomiting, a failure to begin walking - add up. When their pediatrician sends him for tests, the bad news has only begun, but Romeo and Juliette stand strong with a "Declaration of War."

Recreating their own real life experience with her cowriter and costar Jérémie Elkaïm), director Valérie Donzelli ("The Queen of Hearts") may have created the most unique 'child with cancer' movie in the history of cinema. This is an audacious film, with obvious roots in the French New Wave, particularly Godard. Considering its subject matter, it never gets maudlin even as it analyzes the toll their son's illness takes on their marriage. In fact, "Declaration of War" is often very funny and almost always daringly exuberant in its visual and sound design. Ironically, the film's first scene immediately brought to mind "The Exorcist" as Juliette stands by the CAT scan machine housing her son. The sound coming from the machine is aggressively unnerving and puts us on edge. Cut to the electro-tinged, Joy Divisionish punk of Frustration's 'Blind,' playing in a club where Juliette catches the eye of Roméo, who tosses her a pill which she catches in her mouth - talk about 'meeting cute?!' Their names, of course, make for laughter and the ditching of her companion. Donzelli uses propulsive montages to fast track her narrative and no sooner have the couple met than they're married and renovating a condominium. Adam arrives with no documentation of pregnancy and while the young couple are obviously impacted, they do not give up their lifestyle. Roméo, in fact, insists on visiting pediatrician Dr. Prat (Béatrice De Staël, "The Queen of Hearts") because his three week infant's constant crying is 'tyrannizing' them. She offers sage advice but 18 months later the young dad is sure that something's not normal. Juliette is in maternal denial until another visit to Prat begins reassuringly enough then takes a concerned turn. Elkaïm and Donzelli have carved up Adam's illness into three acts each starring a different doctor. Once Prat sets the wheels in motion, Juliette must make a mad dash to Marseilles for an appointment with recommended neurologist Dr. Fitoussi (Anne Le Ny, "The Taste of Others"), who delivers the diagnosis before a return to Paris and surgeon Dr. Sainte-Rose (Frédéric Pierrot, "Sarah's Key"), a doctor the couple shroud in reverent mystery until the real man presents himself and is nothing like they'd expected. That sleight of hand pervades the whole film, the filmmakers setting us up to expect one thing, then delivering something else entirely. The family and friends on both sides are introduced through montage, first humorously around the logistics of apartment renovation (his mother and her wife put them up while her parents are the upper middle class conservatives who provided condo funding), later more dramatically as all react to the news from Marseilles. Around Claudia Benaïm (Brigitte Sy, "Regular Lovers") and Alex's (Elina Löwensohn, "Nadja") kitchen table, editor Pauline Gaillard uses closeups - bread being buttered, cigarettes smoked - to evoke the tension of waiting for medical news. Regard for Godard can be seen not only here and with magical jump cuts, but in the constant running and motorbiking which also moves the action. Director of photography Sébastien Buchmann's use of color and composition give the effect of a moving collage. This is complemented by the sound design which features multi-character voice overs and clever aural transitions. The use of music is distinctive featuring a soundtrack made up of Vivaldi, Laurie Anderson and Ennio Morricone. Elkaïm and Donzelli even contribute their own quirky composition as a double exposure duet, she on a moving train, he 'reflected' in its window. "Declaration of War's" use of black humor and recreational debauchery flies in the face of its subject matter. Here are filmmakers who take conventional expectations, turn them on their heads and create something new which references something old. The film exits on a perfect note as a strong family comprised of a broken marriage and Elkaïm and Donzelli's son Gabriel as Adam romps on the beach to French punk musician Jacno's bouncy synth.

This is definitely aimed at the niche audience who are fans of magic and sleight of hand and other geeky pursuits. Fortunately, I have been a member of that niche since I was a kid – yes, magic shows were around when I was a child – so this, before the first frame, I am a fan of. And, this first feature work by longtime editor Molly Bernstein showcases not just the talented Jay, but also those who influenced his craft throughout his life. I was expecting a documentary about magicians to focus on the big name masters of prestidigitation of today, such as David Copperfield, Doug Henning and Siegfried and Roy. Instead, Ricky Jay and Molly Bernstein bring us an entertaining look at sleight of hand from the eyes, and dexterous fingers, of Jay. They combine many of Jay’s performances on such notable TV shows as Dick Cavett, Merv Griffin, Mike Douglas and Dinah Shore with an entertaining and informative history of modern magic from its earliest beginnings in 1544 through the ages to Jay dedication to the craft. Jay is liberal with praise for those who mentored him, beginning with Max Katz, a master illusionist who was also Ricky’s grandfather and most influential mentor. Others include Slyndini, Al Flosso and Cardini, who Jay believes to be the best magician of all. I will take the word of this Renaissance man who is renowned as a talented magician, author, historian and actor. Jay and Bernstein embellish on this with remarkable old footage of these masters showing us how the tricks of their trade work…and, not. Magicians are paranoid folk and very protective of how their illusions work. Much of the film also concentrates on the two men who had the greatest influence on Jay as a professional magician – Dai Vernon and Charlie Miller. These remarkable magicians challenged and tested their young acolyte and pushed him to hone and improve his sleight of hand skills. As you watch the many performances that Ricky gives over his many years on stage and television, you know that he paid attention to his mentors, Vernon and Miller. Maybe this is a niche film for magic lovers only, but the remarkable and many feats of magical distraction should just about please anyone who likes to be entertained and challenged – “how did he do that?” popped into my head many times during “Deceptive Practice.”