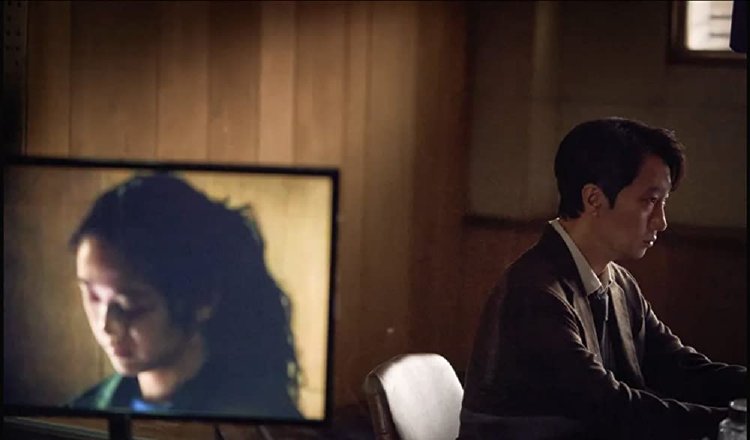 Detective Hae-jun (Park Hae-il, "The Host") is happily married to Jung-an (Jung Yi-seo, "Parasite") but leaves her in the seaside town of Ipo every week for his job in Busan.  When a middle-aged man is found dead at the bottom of a cliff, Hae-jun astounds his young partner Soo-wan (Go Kyung-Pyo) by climbing back up the face of the cliff because it was ‘the last route the victim took.’  But Soo-wan will continually question Hae-jun’s investigative dedication when the woman they thought was the victim’s daughter, the beautiful Seo-rae (Tang Wei, "Long Day's Journey Into Night"), turns out to be his wife and the senior detective seems more intent on clearing her name than solving the crime in “Decision to Leave.”

Director Park Chan-wook ("Oldboy"), cowriting with frequent collaborator Seo-kyeong Jeong (“The Handmaiden”), has whipped up another of his twisty, Hitchcockian thrillers, this time with a serving of duality so intense, the film’s second half will feature a partner in Ipo, Yeon-su (Kim Shin-young), questioning Hae-jun’s intent focus on finding Seo-rae guilty for the murder of her second husband.  He gets to this complete reversal via a long and winding road involving crow’s feathers, iPhones, rough palms and caregiver Seo-rae’s Monday granny (Jung Young-sook) and even after this series of twists and turns there will be one more switchback to navigate.

At first, it seems Hae-jun’s instincts are right as Seo-rae’s alibi is backed up by security footage and the testimony of the woman she cares for on Mondays even though he cannot understand why she married an older immigration official who apparently beat her.  Spurred on by Soo-wan, the insomniac detective stakes out her apartment, but only learns that she eats ice cream for dinner and is aware of his surveillance.  And this being a movie of mirrors, Seo-rae will be watching him as he chases another murder suspect, Lee Ji-goo (Lee Hak-joo), through Busan streets, a case which will end with the actual perp, Hong San-oh (Park Jeong-min), committing suicide by jumping off a roof around the same Seo-rae’s husband’s suicide note admitting corruption is found.

It is disconcerting to see how quickly Hae-jun becomes obsessed with the Chinese Seo-rae as we’ve just witnessed his wife melting in appreciation for the dinner he’s prepared for her after sharing the barbed retort she gave to her friend June who told her weekend marriages rarely last.   But now Hae-jun’s showing off his culinary skills to Seo-rae, who thinks the solution to his insomnia lies in destroying the photos of his most recently closed cases and deleting associated audio files from his phone.  Suggested alongside her intimate breathing exercise to get him to sleep it all sounds reasonable, until Hae-jun does her a favor by taking on her Monday nanny while she deals with an emergency with Tuesday’s and makes some dismaying discoveries.

The film is a murder mystery complicated by its protagonist’s romantic obsession.  It can be surprisingly cheeky, in the same way Hitchcock films often were.  Park Hae-il and Tang Wei perform an exquisite dance of meaningful looks and tricky translations, the latter’s motivation calculated to play two ways with Park adding intrigue by placing the two characters in the same physical space when they are separate and separating them when they are together.  Cinematographer Kim Ji-yong ("A Bittersweet Life") frames an interrogation scene with Seo-rae in the foreground in a monitor while we see Hae-jun questioning her, an organic ‘split screen’ foreshadowing the importance of literal screens.  When the two run into each other with their respective spouses in an Ipo fish market, they have reinvented their lives, Hae-jun now working in the quieter town, Seo-rae’s appearance cheapened with longer, colorfully frosted hair befitting her marriage to Lee Joo Im (Teo Yoo, "Leto"), a con man investor with flashy taste.

The film is overstuffed with detail, some possibly extraneous, and several transitions are jarring, requiring a minute or two to find one’s bearing, flaws which hold the film back from Park’s top tier.  Jo Yeong-wook’s ("The Handmaiden") score plays up the romance while Park’s finale oddly echoes his own “Oldboy” by way of “Woman in the Dunes.”  “Decision to Leave” is a feast on two fronts, however, an adult entertainment which should reward multiple viewings.

Detective Hae-jun (Park Hae-il) is called in to investigate a climber’s death under mysterious circumstances. His prime suspect is the victim’s wife, Seo-rae (Tang Wei), but things get complicated when the cop falls for the possible killer in “Decision to Leave.”

Director Park Chan-wook has challenged and entertained us with such films as “Old Boy (2003)” and “Handmaiden (2016)” so it is a no-brainer to really want to see his latest work. But, it has been seven years since the latter film’s release and I think Park has been idle too long – which is a major problem with the enigmatic “Decision to Leave.” It is too darn long for what you get in its 138 minutes runtime.

The convoluted tale is about a murder investigation, at first, but soon shifts gears to become a love story, too. Unfortunately for me, neither story develops fully and both left me flat. There probably is a good story somewhere in the two plus hours but it desperately needs to be pared down and focused.